pulp Mills case : A Commentary Alan Boyle1. I want to discuss the decision's significance for International environmental law and general International law. Not going to talk about merits of the case . Obviously as counsel for Uruguay I am very pleased indeed with the outcome, but my perspective today will simply be that of an academic with a longstanding interest in this area of law. 1. Significance of case Clearly the most important case on International environmental law decided by any International court so far. Actually addresses the merits and the substantive law. Not simply a case about a river treaty . Court's interpretation and application of the 1975 Statute of the River Uruguay very much influenced by its perception of general International law.

1 pulp Mills case : A Commentary Alan Boyle1. I want to discuss the decision's significance for International environmental law and general International law. Not going to talk about merits of the case . Obviously as counsel for Uruguay I am very pleased indeed with the outcome, but my perspective today will simply be that of an academic with a longstanding interest in this area of law. 1. Significance of case Clearly the most important case on International environmental law decided by any International court so far. Actually addresses the merits and the substantive law. Not simply a case about a river treaty . Court's interpretation and application of the 1975 Statute of the River Uruguay very much influenced by its perception of general International law.

2 Covers most of the issues dealt with by ILC in draft articles on prevention of transboundary harm notification, co-operation, EIA, prevention and due diligence and reflects the ILC's view of the law, notwithstanding the lukewarm reception the ILC's draft articles on transboundary harm have so far received from states, although not from Uruguay or Argentina, which relied heavily on them. Also an important case on International watercourses insofar as it deals with relationship between equitable use, protection of the environment and sustainable development. Once again its approach is fully in line the ILC's work on this subject and with the 1997 UN Watercourses Convention. Worth noting the International economic law aspects Finland- Uruguay BIT, MERCOSUR dimension of 2nd provisional measures case , IFC review process and appeal to ombudsman.

3 The merits decision is of real importance to investors, to the states in which they invest, and to funding bodies such as the World Bank. Finally, yet another case about VC Article 31(3)(c) and interpretation by reference to evolving International law . The court does indeed read one contemporary concept into the treaty EIA and it accepts that measures taken to protect the river's flora, fauna and biodiversity must reflect the parties' International undertakings by virtue of the wording of Article 41. But it rejects Argentina's argument that other treaties are incorporated into the Statute or that various articles of the Statute serve as referral clauses to other treaties. In this respect the court is cautious but quite consistent with its earlier precedents.

4 It is plainly 1. Professor of Public International Law, University of Edinburgh and barrister, Essex Court Chambers. AEB 2010. 1. reluctant to allow one treaty to serve as a jurisdictional basis for litigation under other treaties. To that extent it rejects the idea of forum shopping. 2. EIA. EIA probably the most significant issue dealt with by the court. Until now, no International court has held unequivocally that EIA is obligatory in cases of significant transboundary risk or considered what a transboundary EIA requires. Neither state is a party to the 1991 Espoo Convention on Transboundary EIA, nor is there any reference to EIA in the 1975. Statute. Uruguayan law nevertheless required an EIA for a project of this kind and one was duly carried out.

5 Accepting the arguments of both parties on this point, and in accordance with VC Art 31(3)(c), the court found that the Statute should be interpreted in accordance with a practice, which in recent years has gained so much acceptance among states that it may now be taken as a requirement under general International law to undertake an environmental impact assessment where there is a risk that the proposed industrial activity may have a significant adverse impact in a transboundary context . (para 204). This treats EIA as a distinct and freestanding transboundary obligation in International law reflecting Principle 17 of Rio, the Espoo Convention, and Article 7 of the ILC draft articles on transboundary harm.

6 Nevertheless, the court also endorsed the alternative view that EIA is a necessary element of the due diligence obligation. Either way, the Court has now confirmed that in appropriate circumstances an EIA. must be carried out prior to the implementation of a project that is likely to cause significant transboundary harm. (para. 205). No surprise given the growing body of treaties that require a transboundary EIA, as well as the instances of state practice. No state faced with litigation will deny that there is an obligation in International law to carry out an EIA: what they will do is deny that the circumstances require one (no risk of transboundary harm) or argue instead that an EIA was carried out.

7 Uruguay chose the latter option. Argentina responded by arguing that the EIA was inadequate: that alternative sites should have been assessed. The Court noted that neither the Espoo Convention nor the UNEP EIA guidelines required assessment of alternative sites, but it went on to find that Uruguay had in fact assessed other sites. An important question remains: would the Court ever review the adequacy of an EIA? It accepted Uruguay's argument, based on the ILC commentary, that the scope and content of an EIA are not specified by general International law. It is thus for each party to determine on a case by case basis what is required having regard to the nature and magnitude of the proposed development and its likely 2.

8 Adverse impact. (para 205). This formulation and the finding on alternative sites appears to leave open the possibility of reviewing the adequacy of an EIA in appropriate cases, and it would not be unreasonable to conclude that the Court did so here but found nothing wrong with the EIA undertaken by Uruguay, apart from the failure to make timely notification to Argentina as required by the Statute. There is one human rights aspect to the case , although it was not argued or decided in those terms public consultation. The Court found that there had in fact been public consultation, but it nevertheless went on to hold in categoric terms that no legal obligation to consult the affected populations arises for the parties from the instruments invoked by Argentina.

9 (para 216). This goes beyond what Uruguay had argued, and it seems right only if confined literally to the instruments invoked by Argentina the Espoo Convention and the UNEP Principles. Properly argued there should have been no difficulty persuading the court of the general principle that public consultation is a necessary element of the EIA process. For me this is the only surprise in the entire judgment. 3. Prevention The decision cites Corfu Channel and Nuclear Weapons and reaffirms that A State is thus obliged to use all of the means at its disposal in order to avoid activities which take place in its territory, or in any area under its jurisdiction, causing significant damage to the environment of another state (para 101).

10 In this respect it again reflects the draft articles of the ILC. This is not surprising: it fully accords with the precedents and the leading textbook writers. The court also confirms explicitly that the obligation is one of due diligence: an obligation of conduct rather than one of result. It specifically rejects Argentina's argument to the contrary. (para 187). What does the exercise of due diligence entail? - adoption of appropriate rules and measures (para 197). - a certain level of vigilance in their enforcement . - the exercise of administrative control applicable to public and private operators . - careful consideration of the technology to be used (para 223). - EIA and notification Again none of this is surprising, or new, or controversial. 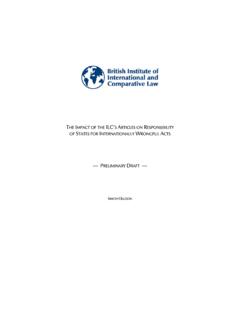 THE IMPACT OF THE ILC’S ARTICLES ON … 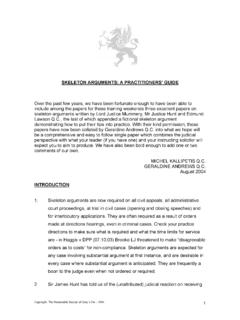 Copyright: The Honourable Society of Gray’s Inn – 2004 1 SKELETON ARGUMENTS: A PRACTITIONERS’ GUIDE Over the past few years, we have been fortunate enough to ... 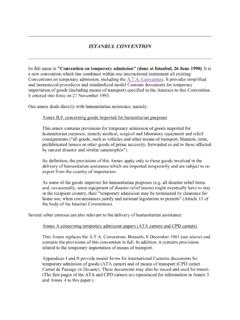 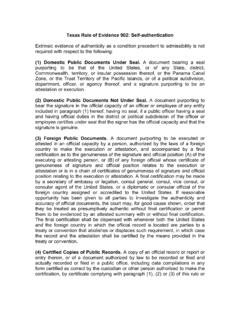 Texas Rule of Evidence 902: Self-authentication Extrinsic evidence of authenticity as a condition precedent to admissibility is not required with respect to the following: 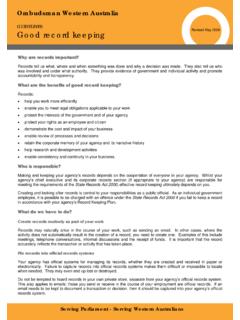 Good record keeping Revised May 2009 Ombudsman Western Australia Handle records with care For paper records to survive and be available for as long as they are needed, they must be properly cared for. 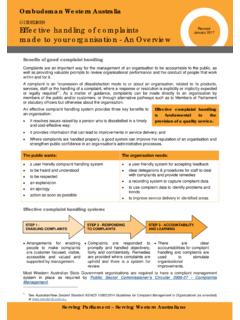 Effective handling of complaints made to your …

INTRODUCTION This Manual is intended to serve as a guide for the trainer(s) leading a Basic Training in Mediation for participants with no prior mediation experience.

The Guide to Ethical Conduct - Tyco

Q: I think a colleague of mine has violated the Guide to Ethical Conduct and maybe even the law . I want to do the right thing and Speak Up, but I am concerned that doing so could hurt my career . What should I do?