4 Watch Your Step A Word of Caution Nisargadatta Maharaj: “Question everything, don’t believe anything.” As you are about to go through this book please

2 As you are about to go through this book please note that nothing you are about to read is true. It is merely words which represent things which do not exist. Please do not fall into the trap of words . Recall two Archetypes, (Current in the ocean that form Waves, then foam, (the I , and bubbles). The First Archetype is of the Genie in the Lamp . In this current the right words , (magic words ) must be said, (chanted) for the genie to ap- pear and grant your wishes, (kind of like mantras). The second Archetypical current is Us- ing a Treasure Map to Search for the Buried Treasure.)

3 Kind of like a spiritual paths search- ing for enlightenment, the holy grail of the spiritual quest. Why is this important to remember as we tread through this book? Because all pointers and meta- phors are using words which represent and describe 4. things which do not exist. In short, Don't fall into the words and language games. Finally, be aware of regressed tendency form- ing precognitive traps that offer pleasure and re- wards for understanding and learning the words and their meanings. This deeply imbedded cur- rent assures only more craving and a fixation on learning more and more words to have more and more experiences with the belief that both ex- periences and words /understanding will lead to the ultimate experience, termed some form of Enlightenment.

4 Nisargadatta Maharaj: all experiences will lead you to is more experiences expect nothing from experiences . As we will see words are designed to break the lan- guage patterns, BUT, throw the thorn away, otherwise you will fall into the trap of words and the joy of pre- verbal conditioning and the learning and experiencing the meaning of words . With Love Your Mirage Brother Stephen 5. Introduction Sri Nisargadatta Maharaj is reminiscent of the Zen Masters of old. With dialogues representative of the 20th century. Maharaj proposed Koan like Questions and Enquires based and guided by the students who came to see him.

5 Maharaj offered questions in the form of an Enquiry through face to face dialogue to be contemplated within . And, when and if the Enquiry was taken in , like a virus it would both dismantle and unpack belief system which clouded your view of reality, while simultaneously pointing you toward the reality of who you were. And sometimes actually describe . as best as possible the Absolute. This was not a talent that he worked at, but rather a one shot straight shot, One consciousness, ONE MIND, without any need for interpretation. It just happened, without forethought or consider- ation, (like everything happens), but appears not too.

6 The text, is words , and as words they represent things which do not exist. However when deliv- ered One Mind-One Consciousness, the jolt can be quite shocking and disorienting as a chuck of the illusion a veil falls away. For example the miss perception of an I , or the sense of doership, or be- ingness. The shock that I experienced which was sometimes painful, sometimes ecstatic, sometimes 6. disorientating but always liberating. This experi- ence of disorientation was representative of the I . or self losing its reference point and location in the illusion of space-time.

7 The text is a pointer thus disabling the illusion of mind as a non-existent mirage. It is through this disabling that the Absolute is revealed or recognized as an indescribable vastness. In the vastness of the absolute the concepts of enlightenment-delusion, paths-yogas, and God it- self, not to mention Consciousness-Emptiness, the Witness, and even Awareness fall away as concepts and part of the dream-illusion. Enjoy the ride Your Mirage Brother Stephen 7. A Note on the Text Please note the many metaphors from an earlier time and culture have been updated with the intent of making the material both clearer and more avail- able to readers in 2011.

8 I would also suggest that this is an ongoing process as culture and vocabulary are constantly changing. When phrases are repeated several times they are being emphasized. 8. Echoes of the Absolute: Without a Sound Nisargadatta Maharaj: If you can forget it or remember it it is not you, therefore discard it.. The word universe appears The birth of a word Like birth and death non-existent outside of the illusion Without a source The absolute knows nothing of these things You are not the source There is no source There is no source A self-knower looking for itself: An idea, a concept, a word made of nothing representing something which isn't There is no such thing as is or isn't There: Not here Here: Not there 9.

10 There is no such thing as consciousness Nothing to hold up The collapse of the knower-self Without knowingness Without a knower Without an experience A concept in the mind The mind: a word representing something that does not exist Without the concept of distance or location Consciousness: Just a knowable concept Nisargadatta Maharaj: Anything you can know or know about you can not be.. 11. More Metaphors Metaphorically, imagine like specks of dust or light coming together Energies Consciousness meeting Cosmic explosion A body to hold the cosmic A cosmic body appearing on emptiness forming the body-mind and the sense of I.

The Beginner’s guide to Quantum Psychology 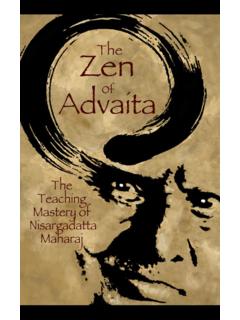 4 forwArd All spiritual paths are pointers at best and become religious dogma at worst. Zen, although a “clean” form of Buddhism with its magnificent Koans which both lure 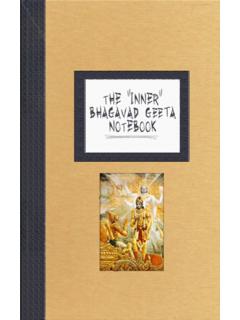 4 Introduction The “Inner Bhagavad Geeta was written as notes in about 2000. It was put together as an attempt to produce a “crash” course in what at the time was a 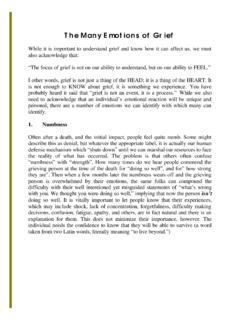 The Many Emotions - Grief Journey

Many, Emotions, The many emotions 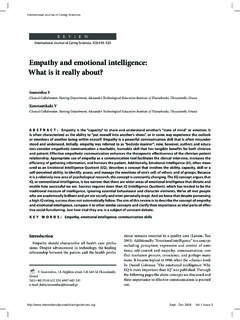 cial, and emotional development. Talking With … 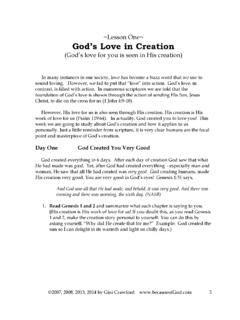 ~Lesson One~ God’s Love in Creation - Because of … 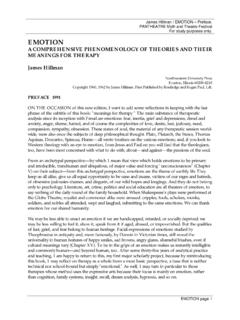 A COMPREHENSIVE PHENOMENOLOGY OF …

James Hillman / EMOTION – Preface. PANTHEATRE Myth and Theatre Festival For study purposes only. EMOTION page 1 EMOTION A COMPREHENSIVE PHENOMENOLOGY OF THEORIES AND THEIR 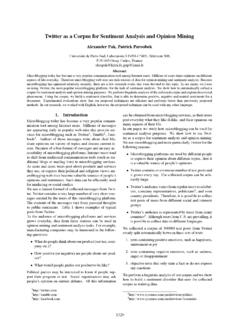 Analysis, Pruco, Sentiment, A corpus for sentiment analysis and