Remarks: This is an extended work of a previous project that had been presented in a poster in the European Paediatric Neurology Society (EPNS) Meeting in May 2011.

2 That patients with higher number of SMN2 copies have 15/18 started on Salbutamol before age 10 (mean milder phenotypes [1]. Salbutamol starting age: years) ( Figure1). Time 10 meter walk test is stable or with mild Salbutamol , a b 2-adrenoceptor agonist, has been shown to improvement trend for children with Salbutamol started significantly increase in SMN2 full length mRNA and at younger age (Figure2a and 2b). SMN protein in SMA fibroblasts [2] and SMN2 copy Figure 2a. Time 10 m walk for children with Salbutamol started SMA 3 scale shows similar trend (Figure 3). numbers also in the peripheral blood leucocytes of type II- before the age of 8. All patients but 3 tolerate well the recommended dose III patients taking oral Salbutamol for 6 months [3].

3 The 3 patients who temporary suspended the treatment Start Salbutamol (increased tremors in 1 patient, behavioural difficulties Previous open pilot studies had suggested that Salbutamol in another one, and transient prolonged QTc in the last may improve functional score and muscle strength in one) restarted on Salbutamol with no major side effects. children with SMA II and III without major side effect The reasons for stopping Salbutamol in 5/23 patients [4,5]. include significant tremor in 3 patients , poor appetite in 1 patient and significant allergic rash in 1 patient. Our centre offer daily oral Salbutamol to children with SMA II and III aged over 2 years. Routine ECG is performed before starting of Salbutamol and 3 months after. The physiotherapy assessment is conducted at Conclusion baseline, 3 months after starting Salbutamol and 6 months thereafter.

4 The Salbutamol maintenance dose is 2 mg tds Oral Salbutamol has been well tolerated and appears to Figure 2b. Time 10 m walk for children with Salbutamol started for children younger than 8 years, and 4 mg slow release maintain, and in some cases improve motor after the age of 8. bd for those older than 8 years. Side effect is monitored. performance in SMA III. Start Salbutamol Aim Our findings together with previous in vitro studies To evaluate the effect of Salbutamol in ambulant children that had proven Salbutamol was being able to with SMA type III. significantly improve SMN protein at SMN transcript level, and previous pilot studies suggested possible Patients and methods beneficial effects in SMA II and III patients, call for 23 SMA type III patients who have oral Salbutamol trial in further multi-centre randomised control trial as the our centre were included in this retrospective review. 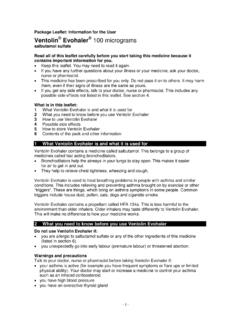 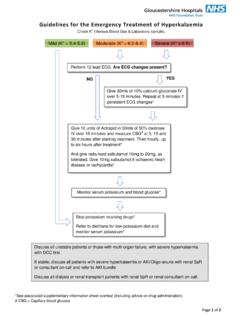 Guidelines for the Emergency Treatment of …

Page 1 of 2 Guidelines for the Emergency Treatment of Hyperkalaemia Check K+ (Venous Blood Gas & Laboratory sample). Discuss all dialysis or renal transplant patients with renal SpR or renal consultant on

Chronic Illness Benefit medicine list (formulary) 2018 Who we are LA Health Medical Scheme (referred to as 'the Scheme’), registration number 1145, is a non-profit 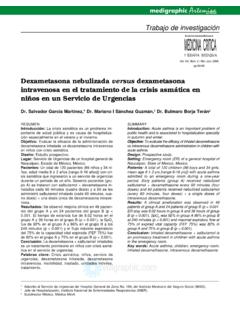