2 The HFA was conceived to give further impetus to the global work under the International Framework for Action for the International Decade for Natural Disaster Reduction of 1989, and the Yokohama Strategy for a Safer World : Guidelines for Natural Disaster Prevention, Preparedness and Mitigation and its Plan of Action, adopted in 1994 and the International Strategy for Disaster Reduction of 1999. The Sendai Framework is built on elements which ensure continuity with the work done by States and other stakeholders under the HFA and introduces a number of innovations as called for during the consultations and negotiations. Many commentators have identified the most significant shifts as a strong emphasis on Disaster risk management as opposed to Disaster management, the definition of seven global targets, the Reduction of Disaster risk as an expected outcome, a goal focused on preventing new risk, reducing existing risk and strengthening resilience, as well as a set of guiding principles, including primary responsibility of states to prevent and reduce Disaster risk, all-of-society and all-of-State institutions engagement.

3 In addition, the scope of Disaster risk Reduction has been broadened significantly to focus on both natural and man-made hazards and related environmental, technological and biological hazards and risks . Health resilience is strongly promoted Sendai Framework also articulates the following: the need for improved understanding of Disaster risk in all its dimensions of exposure, vulnerability and hazard characteristics; the strengthening of Disaster risk governance, including national platforms; accountability for Disaster risk management; preparedness to Build Back Better ; recognition of stakeholders and their roles; mobilization of risk-sensitive investment to avoid the creation of new risk; resilience of health infrastructure, cultural heritage and work-places.

4 Strengthening of international cooperation and global partnership, and risk-informed donor policies and programs, including financial support and loans from international financial institutions. There is also clear recognition of the Global Platform for Disaster Risk Reduction and the regional platforms for Disaster risk Reduction as mechanisms for coherence across agendas, monitoring and periodic reviews in support of UN Governance bodies. UNISDR has been tasked to support the implementation, follow-up and review of the Sendai Margareta Wahlstr m,United Nations Special Representative of the Secretary-General for Disaster Risk Reduction5 ContentsPreamble 9 Expected outcome and goal 12 Guiding principles 13 Priorities for action 14 Priority 1: Understanding Disaster risk 14 Priority 2: Strengthening Disaster risk governance to manage Disaster risk 17 Priority 3: Investing in Disaster risk Reduction for resilience 18 Priority 4.

7 Hyogo Framework for Action: lessons learned, gaps identified and future challenges3. Since the adoption of the Hyogo Framework for Action in 2005, as documented in national and regional progress reports on its implementation as well as in other global reports, progress has been achieved in reducing Disaster risk at local, national, regional and global levels by countries and other relevant stakeholders, leading to a decrease in mortality in the case of some Reducing Disaster risk is a cost-effective investment in preventing future losses. Effective Disaster risk management contributes to sustainable development. Countries have enhanced their capacities in Disaster risk management. International mechanisms for strategic advice, coordination and partnership development for Disaster risk Reduction , such as the Global Platform for Disaster Risk Reduction and the regional platforms for Disaster risk Reduction , as well as other relevant international and regional forums for cooperation, have been instrumental in the development of policies and strategies and the advancement of knowledge and mutual learning.

8 Overall, the Hyogo Framework for Action has been an important instrument for raising public and institutional awareness, generating political commitment and focusing and catalysing actions by a wide range of stakeholders at all and , chap. I, resolution Resilience is defined as: The ability of a system, community or society exposed to hazards to resist, absorb, accommodate to and recover from the effects of a hazard in a timely and efficient manner, including through the preservation and restoration of its essential basic structures and functions , United Nations Office for Disaster Risk Reduction (UNISDR), 2009 UNISDR Terminology on Disaster Risk Reduction , Geneva, May 2009 ( ).

9 Is defined in the Hyogo Framework for Action as: A potentially damaging physical event, phenomenon or human activity that may cause the loss of life or injury, property damage, social and economic disruption or environmental degradation. Hazards can include latent conditions that may represent future threats and can have different origins: natural (geological, hydrometeorological and biological) or induced by human processes (environmental degradation and technological hazards).104. Over the same 10 year time frame, however, disasters have continued to exact a heavy toll and, as a result, the well-being and safety of persons, communities and countries as a whole have been affected. Over 700 thousand people have lost their lives, over million have been injured and approximately 23 million have been made homeless as a result of disasters.

10 Overall, more than billion people have been affected by disasters in various ways, with women, children and people in vulnerable situations disproportionately affected. The total economic loss was more than $ trillion. In addition, between 2008 and 2012, 144 million people were displaced by disasters. Disasters, many of which are exacerbated by climate change and which are increasing in frequency and intensity, significantly impede progress towards sustainable development. Evidence indicates that exposure of persons and assets in all countries has increased faster than vulnerability4 has decreased, thus generating new risks and a steady rise in Disaster -related losses, with a significant economic, social, health, cultural and environmental impact in the short, medium and long term, especially at the local and community levels.

Handbook on Good Building, Design and … 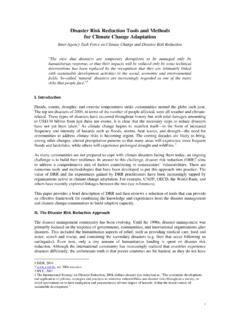 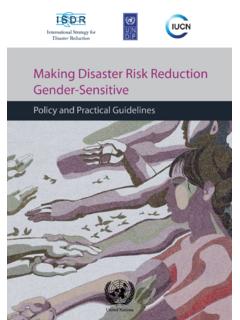 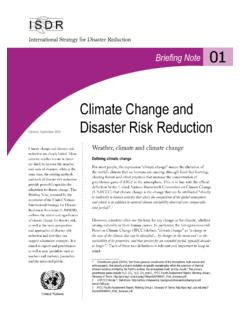 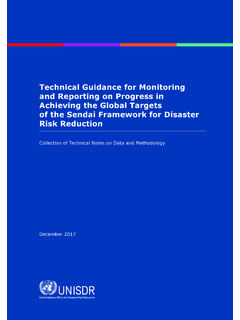 Technical Guidance for Monitoring and Reporting … 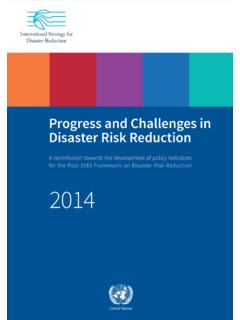 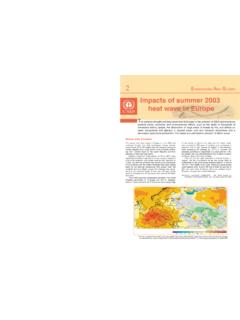 Europe heat wave The severe heat wave began in Europe in June 2003 and continued through July until mid-August, raising summer temperatures 20 to 30% higher than the seasonal average in 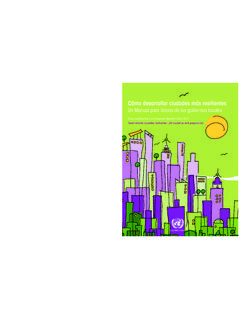 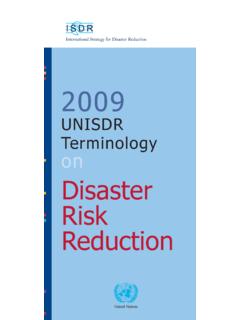 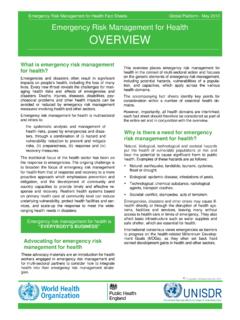 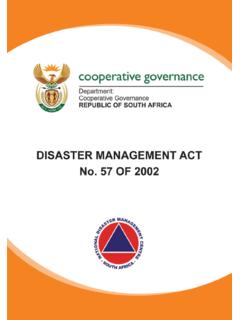 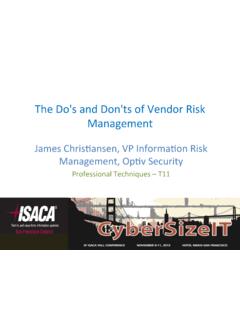 Risks, Vendor, The do s and don ts of vendor risk 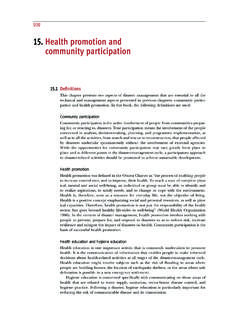 202 15. Health promotion and community participation 15.1 Deﬁnitions This chapter presents two aspects of disaster management that are essential to all the