Standards of Medical Care in Diabetes 2017: …

S4 Diabetes care Volume 40, Supplement 1, January 2017. SUMMARY OF REVISIONS. Standards of Medical care in Diabetesd2017: Summary of Revisions Diabetes care 2017;40(Suppl. 1):S4 S5 | DOI: GENERAL CHANGES approaches were described, and Fig. Medical evaluation based on emerging ev- In light of the American Diabetes Associa- was included to provide an example of a idence suggesting a relationship between tion's (ADA's) new position statement on validated tool to screen for prediabetes and sleep quality and glycemic control. psychosocial care in the treatment of di- previously undiagnosed type 2 Diabetes .

1 S4 Diabetes care Volume 40, Supplement 1, January 2017. SUMMARY OF REVISIONS. Standards of Medical care in Diabetesd2017: Summary of Revisions Diabetes care 2017;40(Suppl. 1):S4 S5 | DOI: GENERAL CHANGES approaches were described, and Fig. Medical evaluation based on emerging ev- In light of the American Diabetes Associa- was included to provide an example of a idence suggesting a relationship between tion's (ADA's) new position statement on validated tool to screen for prediabetes and sleep quality and glycemic control. psychosocial care in the treatment of di- previously undiagnosed type 2 Diabetes .

2 An expanded list of Diabetes comorbid- abetes, the Standards of Medical care in Due to recent data, delivering a baby ities now includes autoimmune diseases, Diabetes , referred to as the Standards of weighing 9 lb or more is no longer listed HIV, anxiety disorders, depression, disor- care , has been updated to address psy- as an independent risk factor for the dered eating behavior, and serious mental chosocial issues in all aspects of care in- development of prediabetes and type 2 illness. cluding self-management, mental health, Diabetes . Section 4. Lifestyle Management communication, complications, comorbid- A section was added that discusses This section, previously entitled Foun- ities, and life-stage considerations.

3 Recent evidence on screening for diabe- dations of care and Comprehensive Although levels of evidence for several tes in dental practices. Medical Evaluation, was refocused on recommendations have been updated, The recommendation to test women lifestyle management. these changes are not addressed below with gestational Diabetes mellitus for The recommendation for nutrition as the clinical recommendations have re- persistent Diabetes was changed from therapy in people prescribed exible in- mained the same. Changes in evidence 6 12 weeks' postpartum to 4 12 weeks' sulin therapy was updated to include fat level from, for example, E to C are not postpartum to allow the test to be sched- and protein counting in addition to car- noted below.

4 The 2017 Standards of uled just before the standard 6-week post- bohydrate counting for some patients to care contains, in addition to many minor partum obstetrical checkup so that the re ect evidence that these dietary fac- changes that clarify recommendations or results can be discussed with the patient tors in uence insulin dosing and blood re ect new evidence, the following more at that time of the visit or to allow the test glucose levels. substantive revisions. to be rescheduled at the visit if the patient Based on new evidence of glycemic did not get the test.

5 Bene ts, the Standards of care now SECTION CHANGES Additional detail was added to the recommends that prolonged sitting be Section 1. Promoting Health and section on monogenic Diabetes syn- interrupted every 30 min with short Reducing Disparities in Populations dromes, and a new table was added (Ta- bouts of physical activity. This section was renamed and now fo- ble ) describing the most common A recommendation was added to cuses on improving outcomes and re- forms of monogenic Diabetes . highlight the importance of balance ducing disparities in populations with A new section was added on post- and exibility training in older adults.

6 Diabetes . transplantation Diabetes mellitus. A new section and table provide infor- Recommendations were added to as- mation on situations that might warrant Section 3. Comprehensive Medical sess patients' social context as well as referral to a mental health provider. Evaluation and Assessment of refer to local community resources and Comorbidities Section 5. Prevention or Delay of provide self-management support. This new section, including components Type 2 Diabetes Section 2. Classi cation and Diagnosis of the 2016 section Foundations of To help providers identify those patients of Diabetes care and Comprehensive Medical Eval- who would bene t from prevention ef- The section was updated to include a uation, highlights the importance of forts, new text was added emphasizing new consensus on the staging of type 1 assessing comorbidities in the context the importance of screening for prediabe- Diabetes (Table )

7 And a discussion of a of a patient-centered comprehensive tes using an assessment tool or informal proposed unifying Diabetes classi cation Medical evaluation. assessment of risk factors and performing scheme that focuses on b-cell dysfunc- A new discussion of the goals of provider- a diagnostic test when appropriate. tion and disease stage as indicated by patient communication is included. To re ect new evidence showing an glucose status. The Standards of care now recom- association between B12 de ciency and Language was added to clarify screen- mends the assessment of sleep pattern long-term metformin use, a recommen- ing and testing for Diabetes .

8 Screening and duration as part of the comprehensive dation was added to consider periodic 2017 by the American Diabetes Association. Readers may use this article as long as the work is properly cited, the use is educational and not for pro t, and the work is not altered. More information is available at Summary of Revisions S5. measurement of B12 levels and supple- The algorithm for the use of combina- footwear for patients at high risk for mentation as needed. tion injectable therapy in patients with foot problems. type 2 Diabetes (Fig. ) has been changed Section 6.

9 Glycemic Targets Section 12. Children and Adolescents to re ect studies demonstrating the non- Based on recommendations from the In- Additional recommendations highlight inferiority of basal insulin plus glucagon- ternational Hypoglycaemia Study Group, the importance of assessment and re- like peptide 1 receptor agonist versus basal serious, clinically signi cant hypoglycemia ferral for psychosocial issues in youth. is now de ned as glucose ,54 mg/dL insulin plus rapid-acting insulin versus two daily injections of premixed insulin, as well Due to the risk of malformations asso- ( mmol/L), while the glucose alert value ciated with unplanned pregnancies and is de ned as #70 mg/dL ( mmol/L) (Ta- as studies demonstrating the noninferior- ity of multiple dose premixed insulin regi- poor metabolic control, a new recom- ble ).

10 Clinical implications are discussed. mendation was added encouraging pre- mens versus basal-bolus therapy. Section 7. Obesity Management for Due to concerns about the affordability conception counseling starting at puberty the Treatment of Type 2 Diabetes of antihyperglycemic agents, new tables for all girls of childbearing potential. To be consistent with other ADA position were added showing the median costs of To address diagnostic challenges asso- statements and to reinforce the role of noninsulin agents (Table ) and insulins ciated with the current obesity epidemic, surgery in the treatment of type 2 diabe- a discussion was added about distinguish- (Table ).

Standards of Medical Care in Diabetes 2017 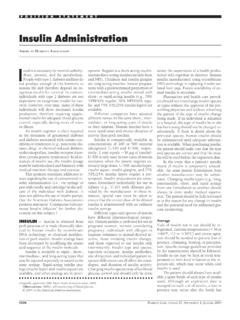 Insulin Administration AMERICAN DIABETES ASSOCIATION I nsulinisnecessaryfornormalcarbohy-drate, protein, and fat metabolism. Peoplewithtype1diabetesmellitusdo not produce enough of this hormone to 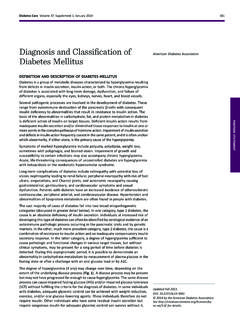 Diagnosis and Classiﬁcation of American Diabetes ...

present with this type of diabetes, the presence of obesity is not incompatible with the diagnosis. These patients are also prone to other autoimmune

Nutrition Therapy Recommendations for the Management of Adults With Diabetes A healthful eating pattern, regular physical activity, and often pharmacotherapy 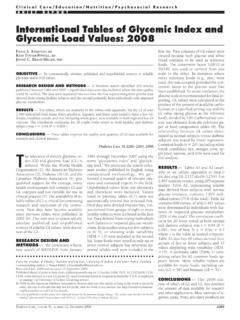 International Tables of Glycemic Index and … 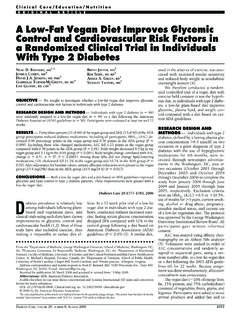 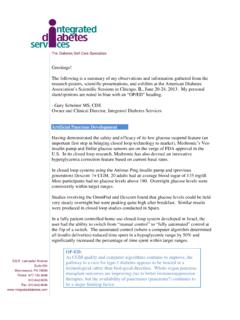 The Joslin Clinical Guideline for Inpatient …

is designed to assist primary care physicians and specialists to individualize the care and set goals for adult, non-pregnant patients with diabetes who are undergoing surgery.

SURGERY ALGORITHM FOR PATIENTS WITH …

Basal Insulin: 0.2 units x weight (kg) in the form of glargine (once daily at bedtime),or detemir (used in type 1 diabetes detemir is given as 50% of dose in the morning and 50% in the evening used in; type 2

Patients, With, Surgery, Diabetes, Algorithm, Surgery algorithm for patients with 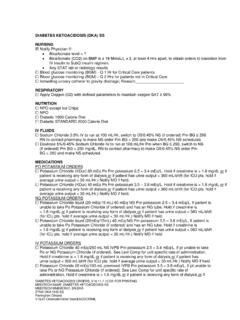 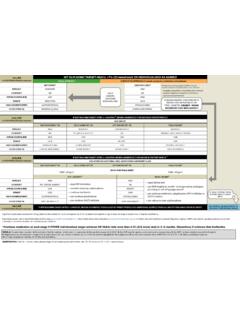 *Continue medication at each stage if EITHER ...