2 The strength and ductility of structural cold-formed Steel (CFS) Framing , along with the holding power of CFS connections, make it the ideal material for construction in high wind speed and seismic zones such as the U. S. eastern seaboard, the Gulf Coast states, California and Hawaii. Characteristics such as non-combustibility, termite resistance, and dimensional stability can lower construction and home ownership costs. CFS can provide the framework for a solid sustainable building program. Each piece of CFS shipped to the jobsite contains a minimum of 25% recycled content and is 100% recyclable at the end of its lifespan.

3 And a recent study, conducted by the NAHB Research Center, showed that the zinc coating on Steel Framing materials can protect against corrosion for hundreds of these reasons, and many others, the use of Steel Framing continues to grow every year with more than 40% of commercial structures now using Steel Framing and with nearly 500,000 homes built with Steel Framing over the past Builder s Guide answers the most commonly asked questions regarding CFS and describes the fundamental process for converting to Steel Framing . In addition, this document provides a Guide to where more detailed knowledge or resources are FAQ s1 oneWhAT IS COLD-FORMED Steel Framing ?

4 Cold-formed Steel Framing is sheet Steel that is formed into shapes and sizes that are similar to what builders are accustomed to seeing in dimensional lumber (2x4, 2x6, 2x8, 2x10, 2x12, and so forth). Steel Framing members are formed in a process called roll forming by passing sheet Steel through a series of rollers to form the bends that make the shape, the web, flanges, and lips of a stud or C-shape. Because this process is done without heat (also called cold forming ) the studs and joists are made stronger than the original sheet twoWhY ShOULD I CONSIDER BUILDING WITh COLD-FORMED Steel Framing ?

6 Discounts on builders risk insurance for Steel framed structures can result in significant cost savings for Framing is easier to handle because Steel studs weigh 1/3 less than wood studs, and can be installed at 24 on center. Steel Framing offers marketing advantages because consumers recognize Steel as a superior Framing product for its fundamental characteristics: Long term maintenance costs are reduced because Steel is resistant to rot, mold, termite and insect infestation. Good indoor air quality (IAQ) is promoted because Steel does not emit volatile organic compounds (VOCs).

7 Steel is Green because it contains a minimum of 25% recycled Steel and is 100% recyclable. Steel Framing has proven performance in high wind and seismic non-combustibility of Steel allows a significant density increase in commercial and multi-family structures, offering building owners with the potential for higher threehOW MUCh WILL COLD-FORMED Steel Framing COST COMpARED TO WOOD Framing ?The method of construction, stick Framing or panelization, and type of project will have a direct bearing on the cost of the Steel frame system. Stick Framing Stick Framing is the method most commonly used to build wood framed homes today, and involves assembling the floors and walls using individual studs and joists on the construction site.

8 This method often requires extensive cutting of individual Framing members, and requires a fairly high level of skill of framers who must know how to assemble the elements within the and trusses represent approximately 20% of the total cost of the house construction. If the conventional stick Framing method of construction is used, Steel Framing can add 3% to the total cost of a house. When only the Framing system is considered, studies have shown that a stick-framed Steel system can cost 15% more than wood Framing . However there are a number of savings that builders realize when they use Steel framing1, including; Warranty callbacks associated with the seasonal movement of Framing members are virtually eliminated ($400) Save on waste haul off ($210) Insurance savings ($60) Site culling of wood Framing ($100)PanelizationPanelization, or assembling the components of the house (walls, floors, roofs) in a controlled manufacturing environment, is increasingly being used in home building today.

10 The capability of delivering product to a large market allows fabricators to recognize economies of scale that keep CFS panel costs in check. The component (panels) approach will speed construction and reduce the number of skilled framers that are required on site. As a result, Steel Framing can cost the same or less than wood Framing in many parts of the country. 4 fourhOW DOES T hE DESIGN pROCESS WORk?Comprehensive provisions for Steel Framing are found in the International Code Council s (ICC) International Building Code (IBC) and International Residential Code (IRC), which are recognized as the governing building codes by most building departments in the United States. 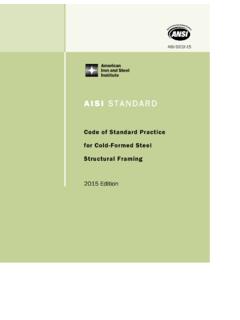 SPECIFICATION FOR THE DESIGN OF - STEEL FRAMING

The first edition of this Code of Standard Practice was published in 2005. The 2006 Edition The 2006 Edition included new provisions on revisions , the RFI process, contract price adjustment and scheduling. SPECIFICATION FOR THE DESIGN OF - STEEL FRAMING

Summary of Changes in the 2004 Edition Standards for Cold-Formed Steel Framing 3 B2 Box Headers: The safety factor in Section B2.3 on web crippling capacity of box headers 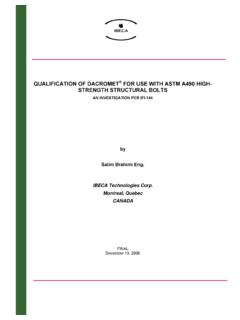 QUALIFICATION OF DACROMET FOR USE WITH …

IBECA QUALIFICATION OF DACROMET® FOR USE WITH ASTM A490 HIGH- STRENGTH STRUCTURAL BOLTS AN INVESTIGATION PER IFI-144 by Salim Brahimi Eng. IBECA Technologies Corp. ...