2 Until Mr. Sanchez has his first c up of coffee Until = subordinate conjunction; Mr. Sanchez = subject; has = verb. Who ate handfuls of Cheerios with his bare hands Who = relative pronoun; Who = subject; ate = verb. Remember this important point: A subordinate clause cannot stand alone as a sentence because it does not provide a complete thought. The reader is left wondering, "So what happened?" A word group that begins with a capital letter and ends with a period must contain at least one main clause. Otherwise, you will have written a fragment, a major error. After Amy sneez ed all over the tuna salad. So what happened? Did Amy throw it down the garbage disposal or serve it on toast to her friends? No complete thought = fragment. Once Adam smashed the spider. So what happened? Did Belinda cheer him for his bravery or lecture him on animal rights?

3 No complete thought = fragment. Until Mr. Sanchez has his first c up of coffee. So what happens? Is he too sleepy to work, or does he have a grumpy disposition? No complete thought = fragment. Who ate handfuls of Cheerios with his bare hands. So what happened? Were the roommates shocked, or did they ask him to pass the box so that they could do the same? No complete thought = fragment. Correctly attach a subordinate clause to a main clause. When you attach a subordinate clause in front of a main clause, use a comma, like this: SUBORDINATE CLAUSE + ,+ MAIN CLAUSE . Even though the broccoli was covered in cheddar cheese , Emily refused to eat it. Unless Christine finishes her calculus homework, she will have to suffer Mr. Nguyen's wrath in class tomorrow. While Bailey slept on the sofa in front of the television , Samson, the family dog, gnawed on the leg of the coffee table.

4 When you attach a subordinate clause at the end of a main clause, you will generally use no punctuation, like this: MAIN CLAUSE + + SUBORDINATE CLAUSE . Tanya did poorly on her history exam because her best friend Giselle insisted on gossiping during their study session the night before . Jonathon spent his c lass time reading comic books since his average was a 45 one week before final exams . Diane decided to plant tomatoes in the back of the yard where the sun blazed the longest during the day . Punctuate carefully when the subordinate clause begins with a relative pronoun. Subordinate clauses can begin with relative pronouns [and thus are called relative clauses, a type of subordinate clause]. When a subordinate clause starts with who, whose, or which, for example, punctuation gets a little bit trickier. Sometimes you will need a comma, and sometimes you won't, depending on whether the clause is essential or nonessential.

1 Name Date FRAGMENTS – EXERCISE 1 Directions: Read each short passage that follows. Determine which part is the fragment. Check your answers with the interactive version of the exercise.

1 RULES FOR USING IRREGULAR VERBS Understand the problem. All verbs, whether regular or irregular, have five forms [often called principal parts]. These forms are the infinitive, simple present, simple past, past participle, and 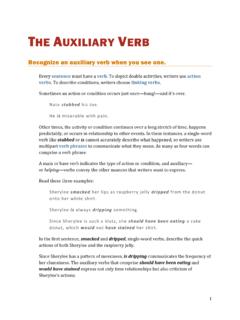 5 WILL +BE PRESENT PARTICIPLE Use the future progressive tense to indicate an action that will continue in the future. I will be growing broccoli in the backyard this spring. 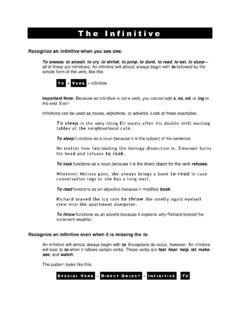 T he I nfi ni tive

T he I nfi ni tive Recognize an infinitive when you see one. To sneeze, to smash, to cry, to shriek, to jump, to dunk, to read, to eat, to slurp— all of these are infinitives.

Viet, He i nfi ni tive 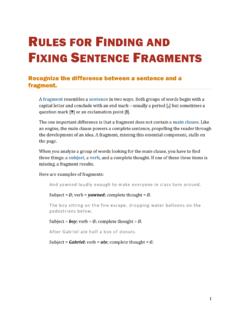 1 RULES FOR FINDING AND FIXING SENTENCE FRAGMENTS Recognize the difference between a sentence and a fragment. A fragment resembles a sentence in two ways. Both groups of words begin with a

1 Name Date WORD CHOICE – EXERCISE 1: THEIR, THERE, AND THEY’RE Directions: Fill in the blanks with the appropriate choice—their, there, or they're… 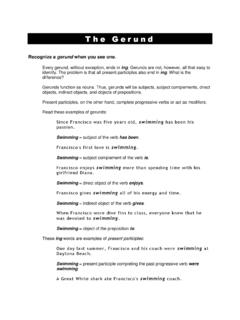 T he G er und Recognize a gerund when you see one. Every gerund, without exception, ends in ing.Gerunds are not, however, all that easy to identify. The problem is that all present participles also end in ing. 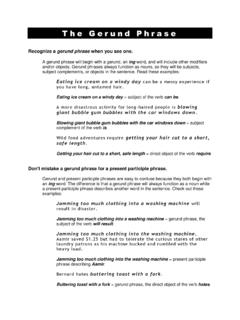 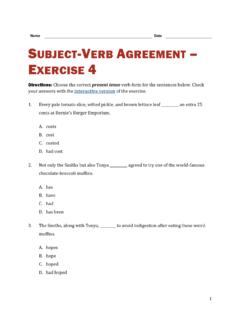 1 Name Date SUBJECT-VERB AGREEMENT – EXERCISE 4 Directions: Choose the correct present tense verb form for the sentences below. Check your answers with the interactive version of the exercise. 1. Every pale tomato slice, wilted pickle, and … 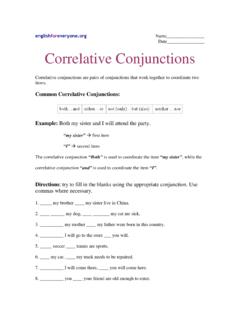 Correlative Conjunctions - English for Everyone 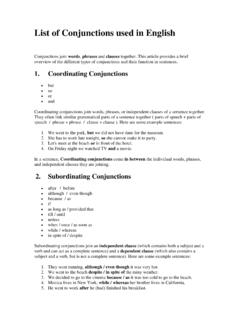 List of Conjunctions used in English Conjunctions join words, phrases and clauses together. This article provides a brief overview of the different types of conjunctions and their function in sentences. 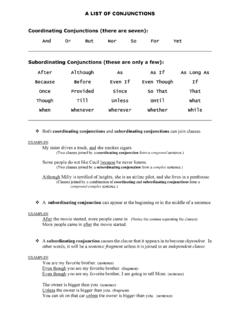 Coordinating Conjunctions (there are seven) 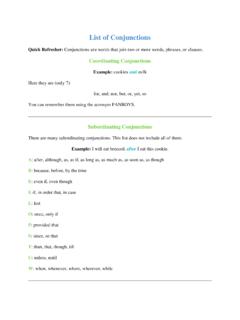 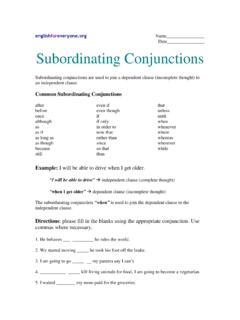 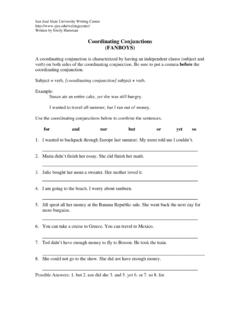 Conjunctions – Words That Join Sentences Use because to join these sentences. 1) John was happy. There was a holiday. 2) She did not drink her tea.It was cold.

CONJUNCTIONS PS-3 Revised Summer 2012 1 Definition: A conjunction is a word that joins words or groups of words. There are four kinds of conjunctions: coordinating conjunctions, correlative conjunctions, 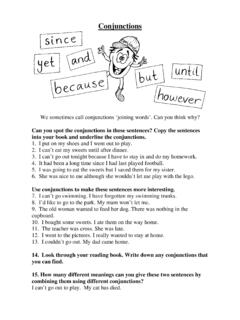