Acta Electrotechnica et Informatica, Vol. 12, No. 3, 2012, 23 26, DOI: AND LEARNING MATHEMATICS THROUGH GAMES AND ACTIVITIESE rika GY ONGY OSI WIERSUMC omenius College Faculty, University of Miskolc, S arospatak, Hungary, e-mail: this paper we first present a theoretical approach to study MATHEMATICS teacher knowledge and conditions for developing it. Thensome interesting activities and games are presented. As a result, this paper supplies teachers with information that may be useful inbetter understanding the nature of games, activities and their role in TEACHING and LEARNING the age of 10 pupils can concentrate less than 20 minutes during a lesson. However, a lesson in primary and secondary schoolslasts for 45 minutes and 50 at universities. What a contradiction! To solve this problem we try to attract their attention with differenttechniques. As children and adults enjoy playing games we can teach and learn MATHEMATICS through games and activities.

24 Teaching and Learning Mathematics through Games and Activities organisations. Mathematical organisation developed in the classroom depends on the didactic organisation, in particu-

1 Acta Electrotechnica et Informatica, Vol. 12, No. 3, 2012, 23 26, DOI: AND LEARNING MATHEMATICS THROUGH GAMES AND ACTIVITIESE rika GY ONGY OSI WIERSUMC omenius College Faculty, University of Miskolc, S arospatak, Hungary, e-mail: this paper we first present a theoretical approach to study MATHEMATICS teacher knowledge and conditions for developing it. Thensome interesting activities and games are presented. As a result, this paper supplies teachers with information that may be useful inbetter understanding the nature of games, activities and their role in TEACHING and LEARNING the age of 10 pupils can concentrate less than 20 minutes during a lesson. However, a lesson in primary and secondary schoolslasts for 45 minutes and 50 at universities. What a contradiction! To solve this problem we try to attract their attention with differenttechniques. As children and adults enjoy playing games we can teach and learn MATHEMATICS through games and activities.

2 Experiencereveals that games can be very productive LEARNING activities. Are some games better than others? What educational benefits are thereto be gained from games? How to integrate games in MATHEMATICS lessons? How to distinguish between activity and game ? How toteach students specialising in electrical engineering and informatics using such an approach?Keywords: TEACHING MATHEMATICS , LEARNING MATHEMATICS , mathematical games, mathematical activities1. INTRODUCTIONM athematics education researchers have recently givenan increasing attention to the knowledge and practices ofmathematics teachers (see Bromme, 1994 [3]; Chevallard,1997 [5]; Ball, 1997 [2]; Jaworski, 1998 [10]). In particu-lar, the ways this knowledge and practice aim of the paper is to study MATHEMATICS teacherknowledge and conditions for developing it in direct re-lation to TEACHING practice.

3 We discuss the wider didacticperspectives of integrating games and activities into mathe-matics is a MATHEMATICS Game? When considering theuse of games for TEACHING and LEARNING MATHEMATICS , educa-tors should distinguish between an activity and a game .Gough, 1999 [8] states that A game needs to have twoor more players, who take turns, each competing to achievea winning situation of some kind, each able to exercisesome choice about how to move at any time through theplaying . The key idea in this statement is that of choice .In this sense, something like Snakes and Ladders is not agame because winning relies totally on chance. The playersmake no decisions, nor have to think further than is also no interaction between players nothing thatone player does affect other players turns in any , 1991 [15] says that mathematical games are activities which: involve a challenge, usually against oneor more opponents; are governed by a set of rules and havea clear underlying structure; normally have a distinct finish-ing point; have specific mathematical cognitive purpose was to find generally useful mathematicsgames and activities for primary school students and teach-ers as I teach in a teacher training college.

4 However, even inhigher MATHEMATICS each topic can be made more interest-ing while students can play and they are motivated to task is to find the right games bringing abstractconcepts closer to the real world. Also if teachers sharetheir findings in papers then many other teacher can profitand improve their TEACHING methods to make TEACHING andlearning more BACKGROUNDT eachers are alone as teachers in the preparation andconduct their TEACHING , and consequently a significant partof their observational didactic knowledge remains leads to a question: What can teachers learn to-gether? Generally, the concept of professional learningcommunity (McLaughlin and Talbert, 2006 [13]) has be-come a main object of research and strategic interventionrelated to teacher development. A related question is thatof the resources on which educators may draw in collec-tive and individual efforts to develop their TEACHING (Guedetand Trouche, 2009 [9]; Winslow, 2011 [18]) for exam-ple, teacher networks organised in technology based plat-forms may enable collective development of resources ininstitutions and even countries.

5 These modalities of shar-ing and collectively develop resources appear indeed to beof increasing importance to many teachers. At the sametime, we face the question about conditions that permit thesharing of didactic knowledge across and beyond individualschools, if that knowledge should really be conceived of asknowledge linked to the profession (rather than to a particu-lar group or school (Stiegler and Hiebert, 1999 [17]; Ciradeand Chevallard, 2010 [4]). Both questions are explained inthis MATHEMATICS GAMES AND ACTIVITIESM athematics TEACHING and LEARNING situations are char-acterised by the construction and sharing of practice andknowledge of a mathematical type. An organisation ofpractice and knowledge is called a mathematical organisa-tion (Miyakawa and Winslow, 2012 [14]). Mathematical or-ganisations are often identified and declared in broad termslike arithmetic , logic , quadratics etc.)

7 It alsoimproves the logical thinking of students which is a gen-eral aim in the curriculum. In this situation the mathemat-ics organisation can be characterised by terms like logic , numbers , arithmetic . The didactic organisation can becharacterised by terms game , activities . The followinggame was invented by Petar Kenderov and Ivaylo Korte-zov [11].Example and John are playing the followinggame. First they both write the number 0. Then they startplaying in the following order. Ann is first and then John,Ann and John and etc. At each turning the player has toadd a one-digit positive number to the number written lastand then put down the sum. The player who first obtains athree-digit number wins. Is there a winning strategy for anyof the players?The Winning Strategy is as follows:Supposing that it is the first player s turn and the firstplayer has 90 to add to then he or she loses whatever num-ber he or she puts down.

8 In this case the second playerwins as the sum written is more than 90 and less than 100and it is his or her turn to add and to exceed 99 obtaininga three-digit number first. Thinking in this way the secondplayer has the winning strategy if he or she adds numberschosen by the first player to 10 or its the following game we represent the abstract con-cept of matrices in a form of a game. A game similar tothe one mentioned in Example was invented by AttilaM ader [12]. I generalised his problem and translated it intoEnglish in this players play the following game. Theyare given a bar of chocolate m n which has m rows andn columns. The players have to break up the bar along thelines representing the rows and columns. The player whocan break off the last piece of the chocolate bar along oneof the lines last wins. Which player has the winning strat-egy?

9 It depends on m and n. If m n is an even number thenthe game is over in the(m n 1)thstep. As m n 1is anodd number the first player wins. If m n is an odd numberthen the second player two games mentioned in the first two examples canbe programmed and with the help of computers studentsare challenged to find the winning strategy playing. Whileplaying and guessing they can try many possibilities in arelatively short time as computers carry out calculationsfast. After finding the main patterns they can get closer andcloser to the solution and their problem solving strategiesand logical thinking is improving during the games. Alsoit is very important to find balance between the traditionalpen and paper methods and using technology while teach-ing and LEARNING my TEACHING practice at Comenius College be-longing to the University of Miskolc, where we also trainprimary school teachers I often experienced that most stu-dents always use calculators to calculate.

10 However, whenthey were asked to calculate without any help of calculatorsthey often calculated incorrectly and some of them werenot capable to carry out simple operations. Therefore theyobviously need to practice their calculation skill which issubstantial as they are going to teach how to calculate inprimary schools. In order to make tedious calculations lessboring I found some mathematical activities to make calcu-lations more enjoyable. Surprisingly while I was studyingFrench I found the following example in a French textbook:Learn French Easily and Fastwritten by Ferenc Somor-jai [16] on page 284. I translated the French version you carry out the following operationscorrectly and tell me the final result I can tell you how oldyou are and the number you live Put down the number where you live at;2. Double this number;3. Add 5 to it;4. 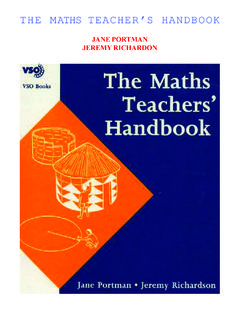 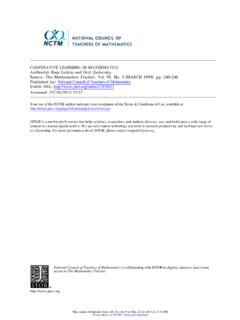 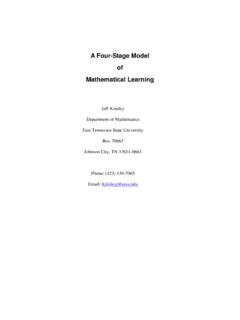 A Four-Stage Model of Mathematical Learning 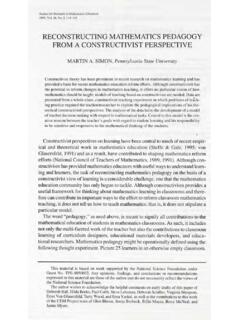 Martin A. Simon 115 The ingredient necessary in order to initiate mathematics learning is pedagogy. This paper describes data from a classroom teaching … 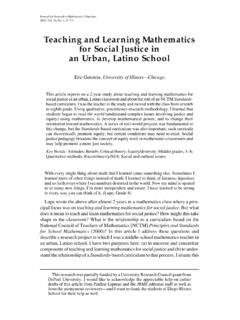 Teaching and Learning Mathematics for Social …

Teaching and Learning Mathematics for Social Justice in an Urban, Latino School Eric Gutstein, University of Illinois—Chicago This article reports on a 2-year study about teaching and learning mathematics for

knowledge, strategies and methodologies in areas including teaching and learning of numeracy; formative, ... Learning to Teach Primary School Mathematics 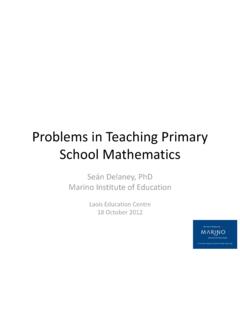 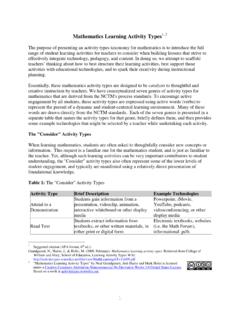 1 Mathematics Learning Activity Types 1, 2 The purpose of presenting an activity types taxonomy for mathematics is to introduce the full range of student learning activities for teachers to consider when building lessons that strive to 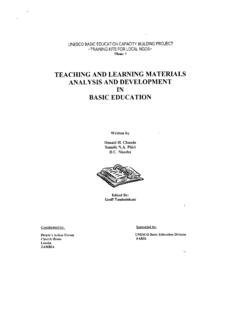