Texas Population Projections 2010 to 2050. The Texas Demographic Center produces Population Projections for 40 years beyond the most recent Census to help planners and policymakers anticipate future demand for services and pressures on infrastructure. In our most recent set of In this Brief: Projections , one migration scenario is employed in which the migration patterns observed in Texas between 2010 and 2015 are The latest Population assumed throughout the Projections horizon. Additionally, this Projections include more updated set of Projections includes a new race/ethnicity category, recent migration trends, a non-Hispanic Asian, and expands the age distribution to 95 years new race/ethnicity category, and older. and expand the age distribution to 95 years plus.

1 Texas Population Projections 2010 to 2050. The Texas Demographic Center produces Population Projections for 40 years beyond the most recent Census to help planners and policymakers anticipate future demand for services and pressures on infrastructure. In our most recent set of In this Brief: Projections , one migration scenario is employed in which the migration patterns observed in Texas between 2010 and 2015 are The latest Population assumed throughout the Projections horizon. Additionally, this Projections include more updated set of Projections includes a new race/ethnicity category, recent migration trends, a non-Hispanic Asian, and expands the age distribution to 95 years new race/ethnicity category, and older. and expand the age distribution to 95 years plus.

2 This document provides a brief overview of the statewide Population Projections for 2010 to 2050 using the migration trends The newly added non- observed in Texas between 2010-2015. This scenario represents Hispanic Asian group is our recommended scenario as it most closely reflects the most projected to grow at the recent migration trends. Projections using the previous migration fastest rate, growing five-fold scenarios can be accessed by contacting our office. Our full by 2050. methodology can be found on our website. The Hispanic Population will likely surpass the non- Migration rates between 2010 and 2015 were somewhat Hispanic white Population by lower than migration rates observed in Texas between 2000 and 2022 but is not projected to 2010.

3 This updated scenario yields a state Population approaching make up the majority of the million by 2050, which represents an percent increase state Population during the over that period. Projections horizon. Projected Geographic Distribution of the Population Much of the Population growth in Texas is projected Our Population Projections suggest the majority of Texas to come from the large urban counties will experience continued steady Population growth counties of Harris, Bexar, between 2010 and 2050. This is especially the case for suburban Dallas, and Tarrant and neighboring suburban counties. The fastest growth is projected to occur in these suburban counties as well as in the Permian Basin area. The Texas Demographic Center is responsible for interpreting and communicating information on demographic and socioeconomic issues for the State of Texas and the general public and through robust and quality Projections , inform planning and policy-making related to the demand and provision of services across the State.

7 These Projections , like all Projections , are beholden to their underlying assumptions, which may or may not occur. One such key assumption is the migration scenario. Migration trends to Texas between 2010 and 2015 represent a high migration period, particularly domestic migration of non- Hispanic Whites. More recent data, yet to be incorporated into the Population Estimates and Projections Program, indicate slower and more diversified migration rates to Texas . As we continue to diligently observe emerging demographic trends in Texas and incorporate new data, we will update our Projections . counties surrounding the large urban centers of East Texas , and parts of South Texas . Dallas-Fort Worth, Houston, San Antonio, and Austin. All of these suburban counties are projected Projections by Age, Sex, and Race/Ethnicity to experience a growth rate greater than that of the State as a whole, with 27 of these counties projected Age to double their populations by 2050.

8 Additionally, a The current Population Projections expand the number of counties in the Permian Basin and age distribution to include the Population aged 95. surrounding the Midland-Odessa area will also see years and older. This age group is captured in Tables continued growth. Although many of the large urban 1 and 2 below in the 85 plus age category. When counties are also projected to experience high compared to the other age categories, the age growth rates, only Harris, Bexar, and Travis Counties category including Texans over 85 years of age is are expected to grow faster than the State. These projected to grow at the fastest rate. The eldest Projections also indicate slower growth in areas of seniors, those 85 years of age and older, are the rio grande valley and El Paso County.

9 Lastly, projected to nearly quadruple in size between 2010. our Projections suggest continued Population decline and 2050, approaching million. The age category in 99 counties, located mostly in West Texas , parts of including those 65 to 84 years of age is projected to 2. be the second fastest growing age group, nearly throughout the Projections horizon and ends with doubling in size by 2050 to a Population of over slightly more females than males. million. The younger age categories are projected to continue a slower but steady growth, with children, Race/Ethnicity ages 0 to 4 and 5 to 17, projected to be the slowest This most recent set of Projections includes growing age groups. the addition of the non-Hispanic Asian race/ethnicity category.

10 In previous Projections , the non-Hispanic Sex Asian group was part of the non-Hispanic Other The 2010 Census showed nearly equal racial/ethnic category. Projections indicate this new proportions of males and females in the State, with race/ethnicity group, non-Hispanic Asians, will grow slightly more females than males. Both groups are at the fastest rate, when compared to other racial/. projected to approach 24 million by 2050. The sex ethnic categories. The non-Hispanic Asian Population ratio is projected to remain about the same is projected to near 6 million by 2050, with a Projected Percent Population Change in Texas Counties, 2010 to 2050. 2010-2015 Migration Scenario Less than 0% (99). 0% to < 25% (76). 25% to < 50% (20). 50% to < 75% (18). 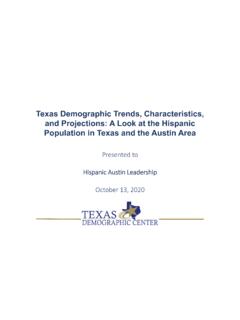 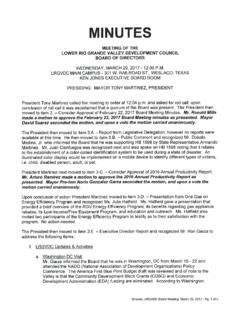 The Lower Rio Grande Valley EDD is in the last year of its three-year grant (2015-2017). In order to obtain these funds, the EDA has requested that staff prepare a Grant Amendment package and an SF-424A Budget Information for Non-Construction Programs. Staff requests Board approval to submit the 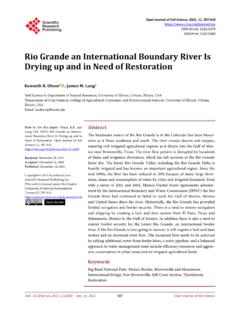 Rio Grande an International Boundary River Is Drying up ...

Rio Grande River east of El Paso and Matamoros and reduce the use of soil tun-nels under the 1600 km long Lower Rio Grande River. 2. Site Location The Rio Grande is the 20th longest river in the world and the fifth longest in North America. The total length is 3051 km with a 3700 m elevation change as it