The Atomic Cannon It was fired only once, but it helped end a war by James Lamont The picture below was taken on the morning of May 25, 1953, at the Atomic energy Commission's Nevada Proving Ground (now the Nevada Test Site). It shows the scene less than a minute after the Army's gigantic Atomic Cannon . made its first and only firing of a nuclear-tipped artillery round. The gun itself was a conventional Cannon , but it had to be extraordinarily big and built with unique features to accommodate its special projectile. The Atomic Cannon shortly after firing, May 25, 1953. The explosion is seven miles away. (NATIONAL OF PETER KURAN). The Cannon was anchored at the south end of Frenchman Flat, about 75 miles northwest of Las Vegas.

…the gun crew runs away after loading… (U.S. DEPARTMENT OF ENERGY, COURTESY OF ATOMIC VETERANS HISTORY PROJECT) …observers look away from the blast.

1 The Atomic Cannon It was fired only once, but it helped end a war by James Lamont The picture below was taken on the morning of May 25, 1953, at the Atomic energy Commission's Nevada Proving Ground (now the Nevada Test Site). It shows the scene less than a minute after the Army's gigantic Atomic Cannon . made its first and only firing of a nuclear-tipped artillery round. The gun itself was a conventional Cannon , but it had to be extraordinarily big and built with unique features to accommodate its special projectile. The Atomic Cannon shortly after firing, May 25, 1953. The explosion is seven miles away. (NATIONAL OF PETER KURAN). The Cannon was anchored at the south end of Frenchman Flat, about 75 miles northwest of Las Vegas.

2 It launched the projectile 7 miles to the north, where it detonated 524 feet above the desert floor with a force of 15 kilotons, the same as the bomb that had devastated Hiroshima. A crowd of 575 official guests witnessed the test, as did about 2,500 soldiers huddled in trenches in the shadow of the blast, some as close as miles to ground zero, the dry bed of Frenchman Lake. As a tactical exercise, the soldiers charged toward the explosion a few minutes later, with the mushroom cloud still rising above them. Units became disoriented in the swirling dust churned up by winds created by the tremendous pressures of the nuclear explosion. The Atomic Cannon first got rolling in 1949 as the result of a turf war between the Army and the Air Force.

3 Since becoming a separate branch of the military two years before, the Air Force had been lobbying for exclusive rights over delivery of nuclear weapons. But the Army already had its own nuclear weapon: the T-124. Atomic shell, a gun-barrel device that was a compact version of Little Boy, the Hiroshima bomb, and packed the same wallop. Unfortunately, the Army had no means to deliver it. Fearful of losing its weapon to the upstart flyboys, the Army quickly set about finding a delivery method. The urgency of the program ruled out taking the time to develop a new system, so the Army searched its existing arsenal. Since missiles and rockets were in too early a stage of development, attention turned to artillery. The T-124 shell required a 280-mm (11-inch) Cannon , but the Army had none with a muzzle that large.

4 So the Army turned to a Cannon project that had been under development since the end of World War II. It was based on a giant 280-mm German gun that traveled on railroad tracks. The Germans called that gun Schlanke Bertha (Slim Bertha), while the Allies nicknamed it Anzio Annie for the drubbing it gave that Italian beachhead in 1944. The new 280-mm Atomic Cannon was, and remains, the largest and heaviest artillery piece the Army ever ordered inches shy of 85 feet long (longer than a railway passenger coach) and weighing a ton per foot. It was too heavy and cumbersome to be maneuvered by a single tractor, so two identical tractors, called transporters, were developed to move it. For long-distance moves, the Cannon could be suspended on a platform between them.

5 The two transporters had separate operators, who coordinated their actions via radiotelephone. This arrangement allowed the Cannon to be turned as much as 90 degrees in either direction. The Cannon was so heavy that it required a paved road, or at least a surface prepared by packing the dirt, to support it. The gun had its own electrical generator, which powered a remote electrical firing system and a hydraulic system. The hydraulics helped handle and chamber the 803-pound nuclear round and could rotate the gun up to 360 degrees on its mount. The effective range of the new Cannon , 20 miles, exceeded that of all other land-based guns of the time. Other than its size and the electrical firing system, not much about the Cannon was new.

6 Even the transporters were based on existing wheeled tractor units. The Army ordered 20 of the guns, and the first two to emerge from its Watervliet, New York, arsenal were immediately subjected to extensive testing. Over 18. months, first at the Aberdeen Proving Ground in Maryland and then at the Army's artillery center in Fort Sill, Oklahoma, nearly a thousand conventional rounds were fired from each gun. One purpose of the tests was to measure the flight time of each round from firing to burst point, 7 miles distant and 500 feet above the target. Since this was decades before computerized telemetry, the problem had to be solved mechanically. This was done using a high-speed motion-picture camera borrowed from the Army's signal school.

7 The camera had a built-in clock whose dial was superimposed in each frame. The camera was focused on the target area, and the clock began running when the primer ignited. Seconds later the camera started. Developed footage gave the firing-to-burst time down to tenths of a second. The only problem and it proved to be a major one was that there were far too many misfires. Technicians knew the trouble lay with the electrical firing apparatus, for the guns operated according to standard when they were fired using the mechanical backup system, by pulling a lanyard to trigger a hammer, which strikes a firing pin on the shell primers. In the electrical system, no firing pin was involved; the primers were ignited electrically. Difficulties with the system continued to vex the project on-site in Nevada.

8 Just days before the scheduled firing of the nuclear round, the problem was finally traced to the wiring of the primers. The electrical firing system was made necessary by the nature of the payload. No nuclear device had ever been instantly accelerated to 2,060 feet per second before, so there was some question whether the sudden jolt might cause the device to attain critical mass prematurely. A larger question was what might occur in the highly unlikely event of a catastrophic metal fatigue failure at the ignition point in other words, if the barrel blew apart at the instant of firing. Such catastrophes were uncommon, but they could not be ruled out, especially with a Cannon and payload that went so far beyond anything previously tried.

9 Thus the big central worry: Would a nuclear detonation occur at the firing point? A true nuclear explosion with supercriticality was extremely unlikely because successful detonation of a nuclear device involves a precise sequence of events with timing measured in picoseconds, and any sudden, violent disruption of this process would almost certainly derail it. Yet while the device would not create a nuclear explosion or a mushroom cloud, it might still spread lethal radioactivity across the immediate blast area. That's why the electrical firing system was developed: to let the gun crew be away from the gun when it was fired. Unfortunately, standard artillery procedure requires a gun crew's presence to quickly clear the weapon (by opening up the breech and pulling out the shell) in the event of a misfire.

10 These conflicting requirements were the subject of some back-and-forth among officers. In the end, the only time the Cannon was fired with a live nuclear payload, the Army decided to rely upon the basic soundness of the Cannon , and a gun crew was present. The 280-mm Cannon was, and remains, the largest and heaviest artillery piece the army ever ordered inches shy of 85 feet long. In late summer 1952 one of the guns being tested was selected to deliver the nuclear round. It was nicknamed Atomic Annie and was scheduled to be part of a series of tests of nuclear devices to be held in the spring of 1953. The series was called Operation Upshot-Knothole, and the specific test that would involve the Atomic Cannon was named Grable, apparently after Betty Grable, the favorite GI. 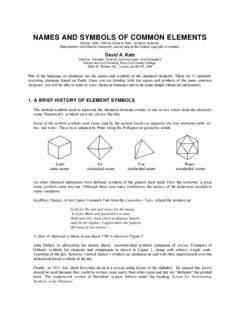 5 2. MODERN CHEMICAL SYMBOLS Listed below are the atomic numbers, names, and symbols of the most common elements. The atomic number is used to determine the place of the element in the periodic table, it also has other meaning as you

FORMULA WRITING AND NOMENCLATURE OF … 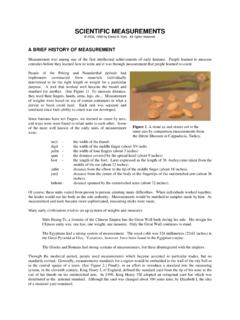 A BRIEF HISTORY OF MEASUREMENT - chymist.com 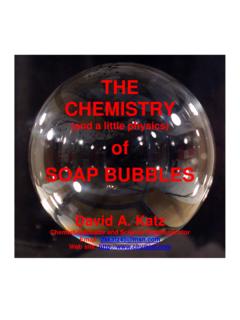 3 Introduction I have been playing with soap bubbles for most of my life. My studies turned from simple amusement to semi-serious study in about 1978, when I started investigating the chemistry of 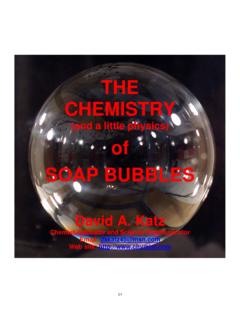 16 The Behavior of Soap Bubbles One reason a bubble breaks is that it hits something dry. The other reason is a result of the water in the walls of the bubble draining to the bottom of the bubble.

CHEMICAL FORMULAS AND FORMULA WEIGHT CALCULATIONS 1. THE MEANING OF A CHEMICAL FORMULA A chemical formula is a shorthand method of representing the elements in a compound. 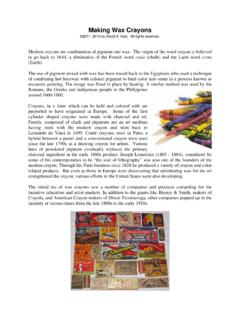 Add 0.25 g of pigment to the melted wax. Stir to obtain a uniform color. If the color is too light, additional pigment can be added. Remove the aluminum pan from the heat. 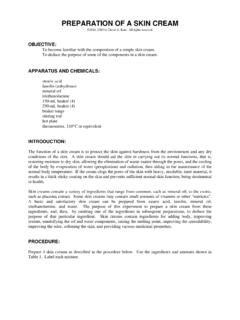 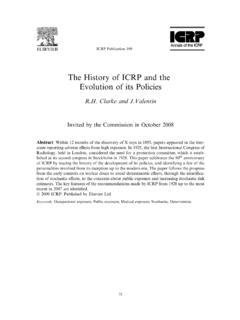 The History of ICRP and the Evolution of its Policies

The History of ICRP and the Evolution of its Policies R.H. Clarke and J.Valentin Invited by the Commission in October 2008 Abstract–Within 12 months of the discovery of X rays in 1895, papers appeared in the liter-

Commission, Policies, History, Evolution, History of icrp and the evolution of its policies, Icrp 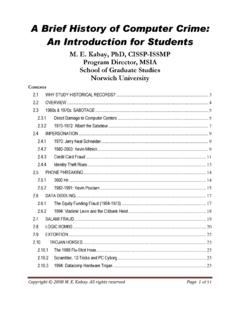 A Brief History of Computer Crime Copyright © 2008 M. E. Kabay. All rights reserved Page 7 of 51 By the mid-2000s, concerns over the physical security of electronic voting systems had risen to 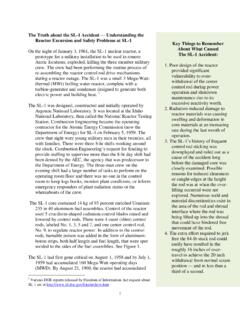 The Truth about the SL-1 Accident Understanding …

1 The Truth about the SL-1 Accident — Understanding the Reactor Excursion and Safety Problems at SL-1 On the night of January 3, 1961, the SL-1 nuclear reactor, a