The Epistle Of James Introduction To The Epistle INTRODUCTION 1. Not everybody who grows old, grows up; there is a vast difference between age and maturity 2. Ideally, the older we are, the more mature we should be; but too often the ideal does not become

The epistle of james, Epistle, James

2 Copeland. Visit the web site to browse or download additional material for church or personal use. The Outlines were developed in the course of my ministry as a preacher of the gospel. Feel free to use them as they are, or adapt them to suit your own personal style. To God be the glory! Executable Outlines , Copyright Mark A. Copeland, 2002. Sermons From James 2. Mark A. Copeland The Epistle Of James Introduction To The Epistle INTRODUCTION. 1. Not everybody who grows old, grows up; there is a vast difference between age and maturity 2. Ideally, the older we are, the more mature we should be; but too often the ideal does not become the real! 3. The result is problems -- problems in personal lives, in homes, and in a. Problems in these areas are caused by immaturity more than by anything else b. If Christians would just grow up, they would become victors instead of victims 4. The Epistle of James was written to help us understand and attain spiritual a.

3 That ye may be perfect and entire, wanting nothing. (Ja 1:4). b. Or as translated by J. B. Phillips: ..any you find you have become men of mature character, men of integrity with no weak spots.. 5. With this lesson, we shall begin a series of expository lessons based upon The Epistle of James , which I hope will help us all to reach this goal of spiritual maturity! 6. Beginning a study of a book of the Bible is something like preparing for a like to know ahead of time: a. Where you are going b. What you can expect to see -- So perhaps the best way to launch a study of The Epistle of James is to answer some important questions [The first question ]. I. WHO WAS James ? A. SEVERAL MEN BORE THIS NAME IN NEW TESTAMENT 1. James , son of Zebedee and brother of John a. A fisherman, he was called by Christ - Mt 4:17-22. b. Together with John, they were nicknamed Sons of Thunder because of their impulsiveness - cf.

5 B) He played an important role in the conference at Jerusalem - Ac 15:13-33. c) When Paul visited Jerusalem, it was to James that he brought greetings - Ac 21: 18-19. B. WHAT KIND OF MAN WAS 1. He must have been a deeply spiritual man to gain such prominence in the church at Jerusalem 2. Tradition tells us that he was a man of prayer a. This may explain the emphasis on prayer in his letter b. It was said that he prayed so much, his knees were as hard as a camel's! 3. Again, tradition tells us that James was martyred in 62 a. That he was cast down from the temple, and then beaten to death with clubs b. That as he died, he likewise prayed Father, forgive them, for they know not what they do.. [It most likely this man who wrote the Epistle bearing his name. The next question ]. II. TO WHOM DID James WRITE THIS Epistle ? A. TO THE TWELVE TRIBES WHICH ARE SCATTERED (Ja 1:1). 1. James wrote to Jews living outside the land of Palestine a.

6 Twelve tribes most probably refers to people of Israel, the Jewish nation - Ac 26:6-7. b. Since the Assyrian and Babylonian captivities, many of the Jews were scattered throughout different nations - cf. Ac 2:5-11. 2. James wrote his letter to Christian Jews a. At least nineteen times he addresses them as brethren . b. That these were brethren in the Lord and not just brethren in the flesh is evident from Ja 2:1. B. IT IS LIKELY THAT MANY OF THESE CHRISTIAN JEWS WERE POOR AND. 1. Being Jews, they would often be rejected by Gentiles 2. Being Christian Jews, they would also be rejected by many of their own countrymen Sermons From James 4. Mark A. Copeland 3. The letter indicates that most of these believers were poor, and some were being oppressed by the rich - Ja 2:6-7. [Another question ]. III. WHY DID James WRITE THIS Epistle ? A. THE Epistle SUGGESTS THAT PEOPLE WERE HAVING PROBLEMS IN. THEIR PERSONAL LIVES AND IN THE 1.

7 They were going through difficult trials 2. They were facing temptations to sin 3. They were hearers, but not necessarily doers 4. Some were catering to the rich, others were oppressed by the rich 5. Some were competing for positions in the church 6. Improper use of the tongue was a problem, as was worldliness 7. Some were straying from the faith B. THESE PROBLEMS ARE NOT MUCH DIFFERENT FROM THOSE OFTEN. BESETTING CONGREGATIONS ! 1. Are there not in churches people who are suffering for one reason or another? 2. Are there not members who talk one way, but walk another? 3. Is not worldliness a serious problem? 4. Are there not Christians who cannot control their tongues? -- It appears that James is dealing with very up-to-date problems! C. BUT James WAS NOT DISCUSSING AN ARRAY OF UNRELATED. 1. All of these problems had a common cause: spiritual immaturity a. These Christians were in need of growing up.

8 B. Look again at some the problems dealt with and you can see that each one of them is characteristic of little children: 1) Impatience in difficulties - Ja 1:1-4. 2) Talking but not living the truth - Ja 2:14ff 3) Lack of control over the tongue - Ja 3:1ff 4) Fighting and coveting - Ja 4:1ff 5) Collecting material toys - Ja 5:1ff 2. This gives us a strong hint as to the basic theme of this Epistle : Marks Of Maturity In The Christian Life a. In fact, James uses the word perfect several times, a word that means mature, complete . b. By the expression a perfect man (3:2), James did not mean a sinless man, but rather one who is mature, balanced, one who is grown-up . D. AND SO James WRITES TO FULFILL A GREAT NEED: THAT OF SPIRITUAL. 1. Spiritual maturity is one of the greatest needs in churches today Sermons From James 5. Mark A. Copeland a. God is looking for mature men and women to carry on His work, and sometimes all He can find are little children who cannot even get along with each other!

9 B. As one person said, Too many churches are playpens for babies instead of workshops for adults.. 2. James wrote to meet this need, so his Epistle is very relevant today! [Finally, the last question to ]. IV. HOW CAN WE GET THE MOST OUT OF THIS Epistle ? A. FIRST, WE MUST BE BORN AGAIN .. 1. Apart from spiritual birth there can be no spiritual maturity 2. James writes with assumption his readers have been born again - Ja 1:18. 3. This rebirth is brought about by obedience to the Word of God - 1 Pe 1:22-23. 4. It involves being born again of water and Spirit - Jn 3:5 (traditionally understood to refer to baptism, cf. Mk 16:16; Ti 3:5). 5. So to benefit the most of this study, we must have been born again through obedience to the truth - cf. Ac 2:38-39. B. SECOND, WE MUST HONESTLY EXAMINE OURSELVES IN THE LIGHT OF. GOD'S 1. James compares the Word of God to a mirror - Ja 1:22ff 2. As we study the a.

10 We are looking into the divine mirror b. And seeing ourselves as we really are 3. We must be honest about what we see and not merely glance at the image and walk away C. THIRD, WE MUST OBEY WHAT GOD TEACHES, NO MATTER THE 1. We must be doers of the Word, and not hearers only 2. The blessing does not come in studying the Word, but in doing the Word - Ja 1:25. D. FOURTH, WE MUST BE PREPARED FOR SOME EXTRA TRIALS AND. 1. Whenever we are serious about spiritual growth, the enemy gets serious about opposing us! 2. But if you wish to develop patience, you should expect some trials - Ja 1:3. 3. However, in the end it will be worth it! - Ja 1:12. E. FINALLY, WE MUST MEASURE OUR SPIRITUAL GROWTH BY THE WORD. OF 1. We should not measure ourselves by comparing ourselves to others - cf. 2 Co 10:12. 2. But by the Word of God, and by the Son of God! CONCLUSION. 1. Remember, not everyone who grows old, grows a.

The First Epistle To The Corinthians - Executable …

Mark A. Copeland The First Epistle To The Corinthians 4 w An incident before Gallio, proconsul of Achaia (Ac 18:12-18) It appears from reading the epistle that the church was adversely affected by the immoral environment

Epistle, Corinthians, Epistle to the corinthians

The Book Of Isaiah - Executable Outlines

The Parables Of Jesus - Executable Outlines

Jesus, The parables of jesus, Parables 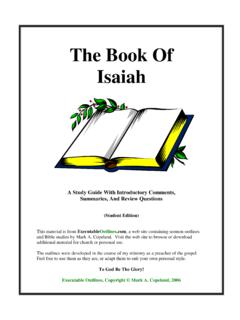 The Book Of Isaiah - Executable Outlines

Book, Isaiah, The book of isaiah 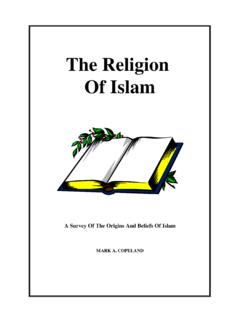 The Religion Of Islam - Executable Outlines

The Religion Of Islam The Origins Of Islam INTRODUCTION 1. Recent events in the Middle East and the U.S. has brought the religion of Islam to the public eye 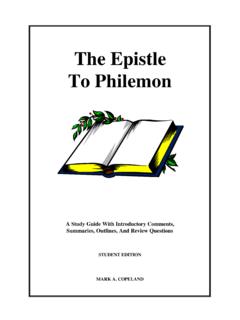 The Epistle To Philemon - Executable Outlines 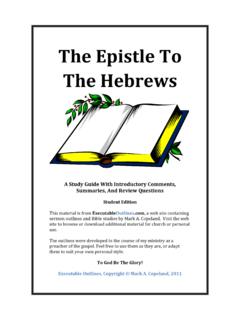 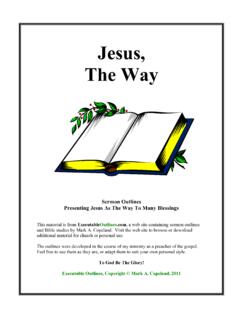 Jesus, The Way 7 3. What has Jesus done to remove this problem? - cf. Ti 3:3-7 a. Out of kindness, love, mercy and grace, God through Jesus Christ has saved us and made us righteous in His sight! b. This took place when we experienced the “washing of regeneration and renewing of the 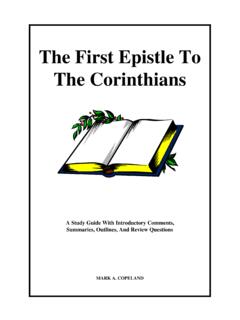 The First Epistle To The Corinthians - Executable Outlines

The First Epistle To The Corinthians Introduction AUTHOR Paul, the apostle (1:1; 16:21), joined by Sosthenes, who some think may be the same as mentioned in Ac 18:17.The authorship of this epistle is attributed to Paul by Clement of Rome in 95 A.D. 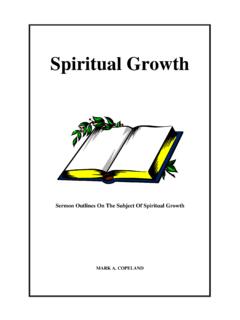 WHAT I NEED: WHAT GOD HAS FOR ME God as Creator (Father) A Bible Study for Teens © 2009, Sharon Kay Chatwell www.SundaySchoolCenter.com Lesson #1 God Created Everything (Seen and Unseen)

What, Bible, Sunday, Sundayschoolcenter, Lesson, Needs, What i need, What god has for 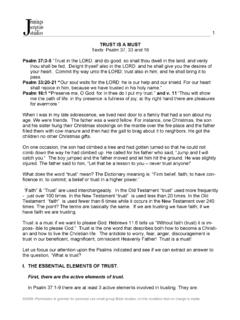 Him, because we have trusted in His holy name. Let Your mercy, O LORD, be upon us, Just as we hope in You.” Notice the attitude that the writer evidences in these verses:

Name, Trust, Must, Trust is a must 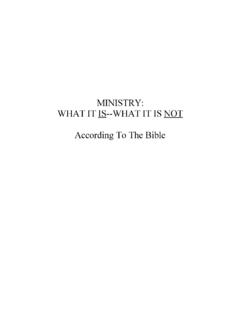 MINISTRY: WHAT IT IS--WHAT IT IS NOT According …

MINISTRY: WHAT IT IS--WHAT IT IS NOT According To The Bible Ask any Christian what “ministry” is. The answers will vary, slightly, but for almost anyone who has been in church a while, the

Solemnity of the Ascension of Our Lord - Cycle B

1 Solemnity of the Ascension – Cycle B Note: Where a Scripture text is underlined in the body of this discussion, it is recommended …

Solemnity, Ascension, Solemnity of the ascension 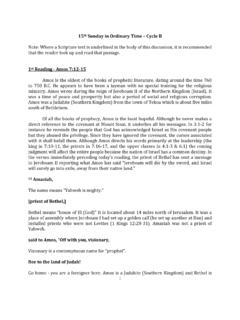 1 15 th Sunday in Ordinary Time – Cycle B Note: Where a Scripture text is underlined in the body of this discussion, it is recommended that …