2 Hemodialysis is an ex-tracorporeal procedure, or procedure outside the body, for filtering uremic substances from the blood of patients. This is the preferred treatment for almost 90% of all DIALYSIS patients. The alternative is PERITONEAL DIALYSIS , which most patients carry out themselves either at home or at work. This type of treatment uses the peritoneum as a DIALYSIS first significant progress with PERITONEAL DIALYSIS was made during the 1920s, but it would take a number of subsequent discoveries in the following decades to make it acces-sible for a larger number of patients with chronic kidney disease. The following pages provide an insight into the fascinating history of PERITONEAL DIALYSIS ENABLES DIALYSIS PATIENTS TO CARRY ON WITH THEIR LIVES AS NORMAL DESPITE CHRONIC KIDNEY MEDICAL CAREPERITONEAL DIALYSIS PERITONEAL DIALYSIS The peritoneum is the lining of the abdomen. With a surface area of as much as two square meters, this thin, shiny membrane covers the abdominal cavity and its internal organs.

3 The peritoneum s very good blood circulation makes it an excellent natural filter membrane. In addition, it has similar attributes to the artificial filter used in hemodialysis its pores allow the passage of certain substances while retaining others. PERITONEAL DIALYSIS (PD) exploits these unique traits. A sterile DIALYSIS solution is introduced at regular intervals into the abdominal cavity through a permanent catheter. It initially remains here to absorb waste products such as urea or creatinine from the blood. Excess water is also removed from the body. After a time, this fluid is drained into a bag and replaced by fresh the lining of the abdomen it is used as a natural filter in PERITONEAL DIALYSIS is the preferred treatment for over 10% of all DIALYSIS MEDICAL CAREPERITONEAL DIALYSIS There are various types of PERITONEAL DIALYSIS . With continuous ambulant perito-neal DIALYSIS (CAPD), patients change the DIALYSIS solution themselves four to five times a day.

4 No machine is needed to change the PERITONEAL DIALYSIS (APD) uses a programmable machine, or cycler, that controls the volume, filling, dwell time and drainage of the solution. Thanks to automated DIALYSIS , patients can now be dialyzed while asleep at bagDrainage bagCatheterPERITONEAL DIALYSISP eritoneumPeritoneal DIALYSIS solution* thin, shiny membrane * surface area of 1 2 m 6 Fresenius MEDICAL CAREFIRST STEPS THE FIRST STEPS TOWARD PERITONEAL DIALYSISThe term peritoneum comes from the Greek word peritonaion and means to stretch . The famous Greek physician Galen and other medical scholars of ancient Greece were the first to study the abdominal cavity. Early anatomists and surgeons described the size and features of the PERITONEAL membrane but failed to discover its detailed structure or function. 1744, physiologist and physicist Stephen Hales joined forces with surgeon and fellow Englishman Christopher Warrick to lay the founda-tion for PERITONEAL DIALYSIS in humans.

5 They attempted to treat a 50-year-old patient with ascites by first removing the excess abdominal fluid from the woman before using a leather tube to introduce a solution consisting of 50% water and 50% wine into her abdomen. In 1862, Friedrich Daniel von Recklinghausen gave the first scientific descrip-tion of the peritoneum s cellular composition. In 1877, the German Georg Wegner performed the first animal experiments to observe the metabolic transport processes occurring through the peritoneum. In do-ing so, he discovered that a concentrated sugar solution would lead to an increased amount of fluid in the abdominal cavity the basis for using the peritoneum for fluid removal, or PERITONEAL ultrafiltration. In 1894, two Englishmen Ernest Henry Starling and Alfred Herbert Tubby discovered that fluid removal through the peritoneum was effected by its blood water from the abdomen in the 17th centuryStephen Hales7 Fresenius MEDICAL CAREFIRST TREATMENTS FIRST TREATMENTS OF HUMAN BEINGS It took until 1923 for Georg Ganter at the University of W rzburg to perform the first PERITONEAL DIALYSIS for patients with chronic kidney disease.

6 He introduced liters of a physiological saline solution one with the same salt concentration as the human blood into the abdomen of a woman who was suffer-ing from a blocked ureter. Although the treatment alleviated the symptoms temporarily, the patient died a short time 1924 and 1938, a number of medical teams in the and Germany performed the first regularly repeated or intermittent PERITONEAL DIALYSIS treatments, thereby proving that this form of treatment can be a short-term replacement for the kidneys natural the following years, the careful selection of materials that were easy to sterilize such as porcelain, metal, latex and glass for the first time made it possible to ensure reasonably hygienic conditions during PERITONEAL DIALYSIS . The main reason why this did not result in more widespread use of the procedure was the lack of a safe method of accessing the patient s abdomen. 8 Fresenius MEDICAL CAREPERITONEAL DIALYSIS CATHETERPERITONEAL DIALYSIS CATHETERSafe access to the abdomen for PERITONEAL DIALYSIS is provided by a catheter.

7 Metal cannulae were originally used to gain access to the abdominal cavity, but these were replaced by stomach and oxygen tubes later on. In 1952, Arthur Grollman from Southwestern Medical School in Dallas developed a catheter that would make PERITONEAL DIALYSIS treatments accessible for patients with chronic kidney failure. Grollman used a one-liter container with a cap to which a plastic tube was attached. This tube was in turn connected to a polyeth-ylene catheter. His revolutionary idea was to use a flexible cath-eter rather than a stiff tube, as had been the case in the past. In addition, the tip of the catheter remaining in the abdominal cavity had several small holes to allow an optimal inflow and outflow of DIALYSIS 1959, the American Paul Doolan designed a catheter for long-term use that could remain in the patient s abdominal cavity. Richard Ruben, another American, used this Doolan catheter to perform the first PERITONEAL DIALYSIS over a period of seven months.

8 9 Fresenius MEDICAL CAREPERITONEAL DIALYSIS CATHETERIn 1968, the American Henry Tenckhoff developed the cathe-ter named after him. Up until then, the widely used stylet catheter had already made it possible to treat patients with chronic kidney failure using PERITONEAL DIALYSIS . However, this meant placing a new catheter in the abdominal cavity for each treatment a time-consuming process for patient and medical staff alike. The permanent catheter developed by Tenckhoff, which proved instru-mental in the wide acceptance of PERITONEAL DIALYSIS , is still in use today. Made from silicone, it has one or two cuffs, which help the catheter to grow into the peritoneum as well as into deeper layers of connective Tenckhoff catheter, which was instrumental in the acceptance of PERITONEAL dialysisEpidermisAbdomial wallParietal peritoneumOmentumBowel loopsCatheterSubcutaneous cuffDeep cuffTENCKHOFF CATHETER10 Fresenius MEDICAL CAREBAGS AND TUBESBAGS AND TUBESIn addition to improvement of the catheters, the development of bags and tubes also played a decisive role in the long-term success of PERITONEAL DIALYSIS .

9 As the most common complication, peritonitis prevented PERITONEAL DIALYSIS from becoming more widely the fall of 1978, PERITONEAL DIALYSIS solution (PD solution) was only available in glass containers connected to the permanent catheter with plastic tubes. Patients had to attach the tubes to the catheter every time they added or removed solution. Because of the repeated connections and disconnections, the risk of infection and thus the peritonitis rate was extremely high. Dimitrios Oreopoulos from Toronto finally made PERITONEAL DIALYSIS practical by introducing disposable plastic bags. The new technique significantly lowered the peritonitis rate while also giving patients far greater freedom of movement. Once the DIALYSIS solution had been introduced into the abdomi-nal cavity, the bag could simply be rolled up and remained connected to the patient s body. To remove the solution, the patient unrolled the bag and allowed the used solution to drain into it.

10 The bag was then disconnected from the catheter and replaced by a new one. Several Italian research teams also made a valuable contribution to the prevention of peritonitis most notably Umberto Buoncristiani, who invented the Y-System. This system consists of an initially empty drainage bag, a Y-shaped tube system and a bag filled with DIALYSIS solution. The used solution initially runs into the drainage bag, also removing any bacteria from the catheter connector. The fresh DIALYSIS solution is then flushed through the tube system into the almost completely filled Sterilization of PERITONEAL DIALYSIS solutions in large glass containersPERITONITIS inflammation of the abdominal lining11 Fresenius MEDICAL CAREBAGS AND TUBES drainage bag for about three seconds in order to remove air from the feed tube. The connection to the abdominal cavity remains closed during this procedure. Only after this flushing is fresh DIALYSIS solution introduced (flush-before-fill principle). 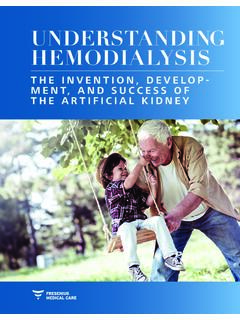 4 FRESENIUS MEDICA CARE HISTORICAL BASIS OF HEMODIALYSIS Acute and chronic kidney failure, which can lead to death if untreated for several days … 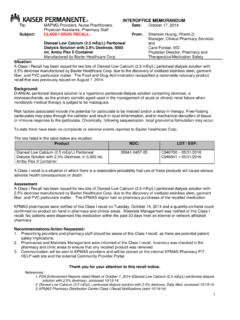 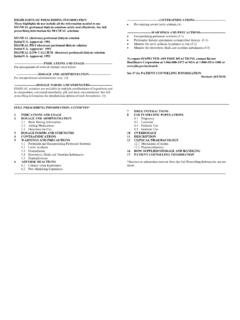 ervation of the peritoneal membrane by reduction of ... Glucose Peritoneal Dialysis Solution for ... with an AA-based PD solution (Nutrineal) mixed with Dianeal in a ... 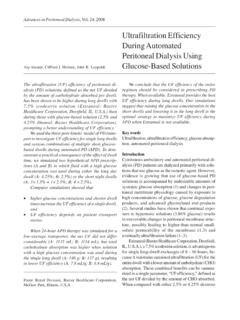 Advances in Peritoneal Dialysis, Vol ... during those with glucose-based solution (2.5% and 4.25% Dianeal: ... the dextrose concentration in the dialysis solution. 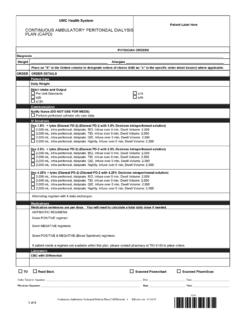 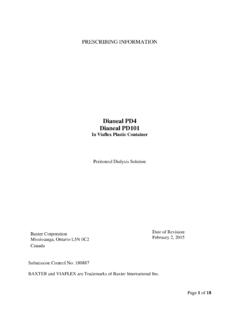 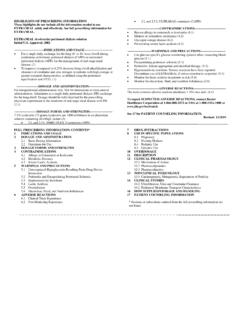 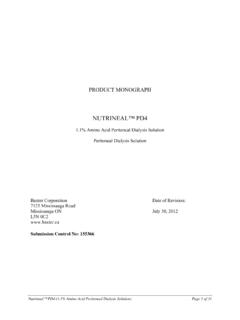 Nutrineal PD4 (1.1% Amino Acid Peritoneal Dialysis Solution) Page 5 of 31 Potassium is omitted from Nutrineal PD4 solutions due to the risk of hyperkalemia. In ... 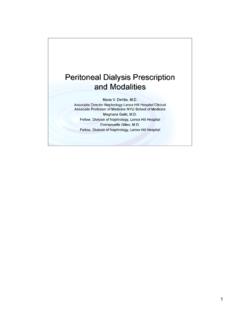