VirtualDJ 8 - User’s Guide 4 A. BASIC FEATURES Before beginning to use VirtualDJ, it is important to familiarize yourself with the controls and the available sections of the default GUI (Graphical User Interface) or Skin.

3 On the right side a Close button to shut- down the application, along with minimize and maximize buttons are offered. The layout of these buttons is reversed on Mac OS computers. The maximize buttons offer 3 states: Fully maximized: Application covers the whole screen Semi-maximized: Application covers the whole screen, but leaves the bottom taskbar visible. Windowed: Application is displayed in a smaller resizable and movable window Click on the button to open the Settings of VirtualDJ . VirtualDJ logo Settings & Applications buttons System Information On the top left side a Clock is available along with some information about the CPU. usage. Click on the Time text to toggle between 12 and 24h Clock & CPU usage time format. The progress bar of the CPU indicates the CPU usage for all applications running at that time on your computer. Hover mouse to see information about the Sound card interface usage.

4 VirtualDJ 8 - User's Guide 6. Layout & Mode Click on the button to select how many decks you wish VirtualDJ to display. Toggle between the Keyboard and the Tablet Mode using the 2 MODE buttons. A special Tablet skin is offered with similar features but with much large buttons, mainly for touch-screen users (2 Decks only). Keyboard / Tablet Mode Decks Layout Master VU meter & Limiter The VU Meter on the top shows the Volume Level of the Master Output*. The Limiter* indicator shows if the signal of the Master Output is Master Volume Level & Limiter compressed or not. * Note. Both Master VU and Limiter indicator will not be available if an External Mixer Audio setup is selected (see Audio Setup). Waveform Display This area tracks the waveform of each song loaded or playing on a deck. It also features a Computer Beat Grid (CBG) used for visual mixing and beat-matching. The waveform posts curves corresponding to the two rates/rhythms of the music, allowing you to see your music.

5 The peaks in the curve represent beats. In order to synchronize the music, these peaks should occur at the same time. The present is represented by the feature in the middle of the screen. All on the left as already played, while what is on the right represents the next few seconds of the track. Below the curves there are small squares, named CBG (Computed Beat Grid), which represent the position of measures. The large squares represent the beginning of a measure 4:4 time. The CBG is particularly useful, for example, when mixing a track at the time of an intro where the beat is not yet present. Waveform - Rhythm & CBG. In the picture above, you can see that the beats are completely synchronized. It is easy to see that the peaks (beats) of the music are lined up. However, some music does not have VirtualDJ 8 - User's Guide 7. the very obvious single beat peaks that most house and techno music has.

8 Different Scratchwaves can be selected from Options (ColoredWaveforms setting), where the detected frequencies of the track are differently colored. Zoom slider & preset buttons Use the slider to zoom in/out and adjust the visible area of the wave in the waveform. Click on the D button to get the default zooming value. Use the S button to save your custom zooming value and the R button to recall it. Zoom Slider Zoom buttons Beat keeper & phrase indicator The Beat keeper indicates on which beat of the 4 beat bar the track is on. On the sides, extra beat counters are 4 Decks offered based on the 16 beat phrase of each track 2 & 6 Decks Deck Controls Drag and drop a track from the Browser into a VIRTUAL Deck dropzone area. Once the track is loaded the track info will be displayed and all deck controls will be available. Press the button to start playing the track. Track Info Display 2 DECKS 6 DECKS.

9 Once a track is loaded to a deck, the track's Info such as Artist, Title, Time (Remain, Elapsed and Total), Cover, BPM, Key and Gain will be displayed in this area. The track will be analyzed and the song-position (progress) will be displayed. VirtualDJ 8 - User's Guide 10. Click on the Remain/Elapsed/Total Time display to get the desired Time View Use the button to manually calculate the BPM of the track. Right-click on the button to open the BPM Editor to perform more advanced and precise Tempo and Beat/Phase corrections if required. (See BPM Editor). Click on the Cover of the track to open the Tag Editor to view and edit all the available info of the track Key Control Click on the Key text to get its value into 3 different views. Press the button right next to the Key value to reveal/hide the Key Control panel in order to adjust or reset the Key of the track. Use the buttons to move the Key one semitone up/down and the button to bring the track back to its original Key value.

10 Key Control Panel Turn on/off the Master Tempo (Key Lock) with the button. If Master Tempo is enabled the Key of the track will retain its value if the Pitch is changed. 6 DECKS. All 6 Decks are offered as Mini Decks below the Left and the Right ones. Mini Decks 1, 3. and 5 can become Left (A) and Mini decks 2, 4 and 6 can become Right (B) Deck if you click on the header of each Mini Deck. Artist, title and song position is offered for each one of the Mini Decks. Each time one of the Mini Decks is set as Left or Right the Mini Deck gets the corresponding color (blue for Left, red for Right) The M buttons indicates the Master Deck (all other decks will sync to the Master Deck if SYNC is pressed). VirtualDJ 8 - User's Guide 11. Mini Decks - Deck 3 assigned as Left (A). 4 DECKS. Once a track is loaded to a deck, the track's Info such as Artist, Title, Elapsed and Remain Time, Cover, BPM, Key and Gain will be displayed in this area.

VirtualDJ 8 – Quick Setup Guide 3 Welcome to VirtualDJ 8! Overview VirtualDJ 8 is the new, highly anticipated flagship product that will take your audio and video mixing to 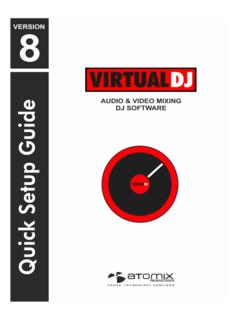 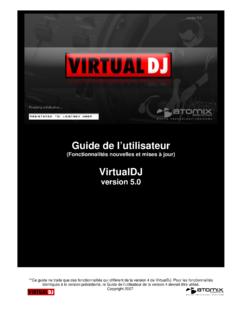 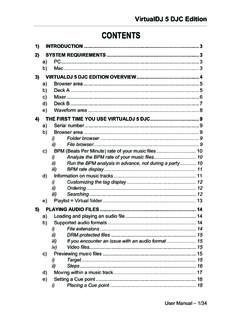 VirtualDJ 8 – Quick Setup Guide 3 Welcome to VirtualDJ 8! Overview VirtualDJ 8 is the new, highly anticipated flagship product that will take your audio and video mixing to