3 (Available for purchase at: ). SLIDE # 5. The Voltage Surge Test Method This presentation provides an overview of IEC 61000-4-5, including some of the standard waveforms, and the circuits that are used to produce those waveforms Voltage Surge testing is typically done with commercially available Surge test equipment The test equipment typically has a Surge generator and a coupling/decoupling network (CDN). Combination wave generators produce a specified open circuit Voltage waveform and a specified short-circuit current waveform Coupling/decoupling networks couple a Surge generator to the equipment being tested and prevent dangerous voltages from being sent back into the ac Power system SLIDE # 6. IEC 61000-4-5. Combination Wave Generator (CWG).

7 [8] IEC 61000-4-4 (2004) Testing and measurement techniques Electrical fast transient/burst Immunity test [9] IEEE/ANSI Recommended Practice on Characterization of Surges in Low- Voltage (1000 V and Less) AC Power Circuits SLIDE # 15. Part 2 Simulating Surge Testing It would be great to be able to design equipment that passes the Surge tests without having to be re-designed Performing circuit simulations of Surge testing during the design phase can help you to understand component stress levels, and prevent costly re-design efforts. IEC 61000-4-5 provides schematic diagrams of standard Surge generator circuits, circuits and describes what waveforms they should produce, but no component values are given. The next part of the presentation reviews a Mathcad file that derives a suitable set of component values for the s Voltage , 8/20 s current combination wave generator The presentation concludes with a review of an LT Spice circuit simulation of the combination wave generator coupled to the input section of a Power supply SLIDE # 16.

9 IEC 61000-4-5 shows this circuit in Figure 1 on page 25, but it does not give any component values [1]. Instead, Table 2 on page 27 presents two sets of waveform characteristics. The first set is based on IEC 60060-1. It defines each waveform in terms of the front time and time to half value. The definition for the front time makes it awkward to use for circuit synthesis. The second set of characteristics is based on IEC 60469-1, and it specifies the 10%-90% rise times and the 50%-50%. duration times. It appears that it is easier to derive component values from the IEC 60469-1 definitions, so this document takes that approach. SLIDE # 18. Table 1. Waveform Definitions 10%-90% Rise Time 50%-50% Duration Time s Open-circuit Voltage Waveform 1 s 50 s 8/20 s Short-circuit Current Waveform s 16 s Figures 2 and 3 on page 29 of IEC 61000-4-5 provide graphical definitions of the waveforms.

10 These figures also specify that the undershoot of the Surge waveforms be limited to 30% of the peak value. The circuit is first analyzed in the Laplace domain, after which time domain equations are derived. Functions for the waveforms and functions for computing the time to reach a specified level are then derived. The component values are derived using a solve block which seeks to meet the specified waveform characteristics. SLIDE # 19. Derive Laplace domain equations for open-circuit Voltage Write Laplace equations for the three currents in Figure 1 for the time after the switch is closed at time t = 0. Assume that the capacitor is fully charged to Vdc , and that the initial inductor current is zero. Also, assume that the effects of the charging resistor Rc can be neglected.

How to use isolation to improve ESD, EFT and … 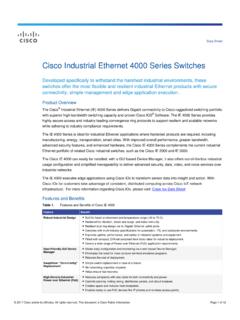 2017 Cisco and/or its affiliates© Industrial Ethernet 1 ® 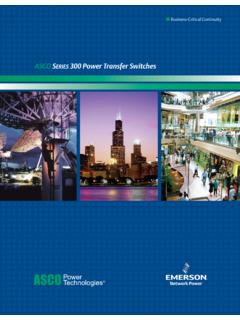 SERIES 300 Power Transfer Switches for Power Outage Protection. ASCO< 2 It’s for this reason that many businesses and other entities have invested in