Water To Fill (And Top-up) Your Aquaponic System

Water To Fill (And Top-up) your Aquaponic System : Chlorinated Water City Water is potable Water by definition. It is relatively expensive, but you can safely use it for washing babies and drinking. Even filling up a big commercial aquaponics System for the first time only uses ten or twenty dollars worth of our chlorinated "city" Water at current prices. However, you want to be careful of adding large amounts of chlorinated Water to a System that has fish or vegetables or both in it. You may want to put the Water in a holding tank for a couple days to burn off the chlorine before putting it in the System .

Water To Fill (And Top-up) Your Aquaponic System: Chlorinated Water City water is potable water by definition. It is relatively expensive, but you can safely use it for ...

System, Your, Aquaponic, And top up, Your aquaponic system

1 Water To Fill (And Top-up) your Aquaponic System : Chlorinated Water City Water is potable Water by definition. It is relatively expensive, but you can safely use it for washing babies and drinking. Even filling up a big commercial aquaponics System for the first time only uses ten or twenty dollars worth of our chlorinated "city" Water at current prices. However, you want to be careful of adding large amounts of chlorinated Water to a System that has fish or vegetables or both in it. You may want to put the Water in a holding tank for a couple days to burn off the chlorine before putting it in the System .

2 We dribble 50 to 100 gallons a day of chlorinated Water into our systems with no ill effect, as our chlorine level is quite low or unmeasurable. Measure your chlorine levels to be sure with test strips. ChlorAminated Water IMPORTANT! This is NEW! You must also test for chloramines (NH2CL)in your city Water . A. simple chlorine-only test will not show the presence of chloramine; you can't smell it like you can smell chlorine, and so you must use chloramine test strips to tell whether or not you have chloramines in your Water . Chloramine is increasingly being used to chlorinate Water because it is less expensive, and does not dissipate as quickly as chlorine.

3 Get test strips that test for both chlorine and chloramine, and test for both before you fill up your System so you know what you're getting into. When testing for chloramines, make sure your test kit tests for "total chlorine" or "combined chlorine" or for chloramine and chlorine , not just for "free chlorine". A test for "free chlorine" would misleadingly read zero in chloraminated Water . You can buy a swimming pool test kit which tests for both chloramine and chlorine, which is the same but usually far less expensive than aquarium test is caustic: there are lawsuits all over Southern California from builders who had to replace all the piping in subdivisions they'd built because chloramines had eaten pinholes in the copper pipe they'd used.

4 Total Chlorine test strips test for both chlorine and chloramines in your incoming Water . This is critical, because you may have Water with toxic amounts of chloramines in it that won't show when tested with a chlorine-only . test strip! Such Water will kill your fish and plants! There's another tricky thing to watch out for here: many municipalities now use chloramine for chlorinating Water with, because it's much cheaper and longer lasting than plain chlorine. But unless you have a "total chlorine" test strip, or a test strip that tests for "chlorine AND chloramines" you can't detect chloramine at all.

5 Here's a trick to use if you can't find Total Chlorine test strips, and you have ammonia test strips: test for ammonia. If you see ammonia levels of to 3 ppm in Water that shows no chlorine (when tested with a chlorine-only test strip), you can be almost certain that your incoming city Water has chloramines in it. This is because the ammonia strip responds to the "'amine" portion of the chloramine, and presents a positive ammonia reading, making it look like you have high ammonia levels in your System . You don't; you simply need to get a total chlorine test strip and try again.

6 Chloramine does not out-gas as chlorine will with aeration and sunlight, so you have to actively remove it from your Water , or wait days or weeks for it to dissipate on its own. Here's what we recommend for active removal, if you find that you have chloramine in your Water :Many sources cite ascorbic acid(Vitamin C) as a neutralizing agent for chloramine (see Wikipedia article here: ). Here's a source for the NSF-certified chemical (National Sanitation Foundation certification) in quantity from the Integra Chemical Company: ). Do not use the Vita-D-Chlor Neutral , as it is sodium ascorbate.

7 The sodium atom in this compound will break away in Water , and recombine with a free chlorine atom to form salt; that's bad for your plants! Do use the Vita-D-Chlor Granular ; it is ascorbic acid, and will neutralize chloramines if used according to their instructions for concentration and then mixed with your System Water (or makeup Water ).You can neutralize all the chloramine in your System Water easily with a one-time application of ascorbic acid when you start up your System , then simply wait two days before you add bacteria and fish for the ascorbic acid will neutralize all by itself (test for chloramines to make sure you're done!)

8 After you initially fill and dechloraminate your System ,and are now operating a live aquaponics System , you will need to add Water at irregular intervals to make up for Water usage. Normally you would fill your makeup Water tank with tap Water , mix in ascorbic acid, and wait a couple of days for the ascorbic acid to self-neutralize. Yes, you need a separate tank for this if your Water has chloramines in it, because you cannot put either chloraminated Water or ascorbic acid into your live aquaponics System ! If you can't waita couple of days to add the makeup Water to your System , neutralize the ascorbic acid in the makeup Water tankwith a couple handfuls of calcium carbonate thrown in with the new Water and stirred around thoroughly, and you should be able to safely add it right away.

9 Calcium carbonate is coral sand or crushed oyster shell, which we use in our systems anyway to balance pH. Why do you need to neutralize the ascorbic acid if you're going to add the Water right away? Because ascorbic acid acts as a herbicide in your System ; it will sicken or kill the plants and turn their roots black if you add Water with high enough quantities in it. Some of our students say they have successfully used Kordon AmQuel Ammonia/Chloramine Remover in their Micro Systems. Proceed carefully with this kind of product, as Water conditioners made for aquarium use (as the Kordon product is)do not have certification for use in a food production System .

10 Brominated Water IMPORTANT! (As If That Wasn't Enough!) Instead of Chlorine or Chloramine, Some Water Systems now use Bromine to sanitize their Water ! You should check with your Water department to make certain exactly what they're using to sanitize your potable Water , and also check with them on the best way to de- brominate it, if you find that yours uses bromine. Bromine is toxic, just as chlorine and chloramines are, or else it wouldn't be able to kill the microorganisms in Water that it is designed to get rid of. This means it is also toxic to you, your fish, and plants, even though it may be a small amount and only slightly toxic. 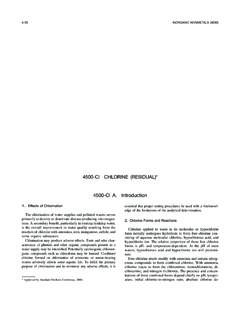 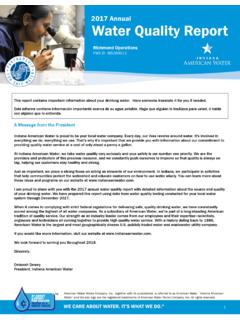 American Water Works Company, Inc., together with its subsidiaries, is referred to as American Water. “Indiana American

Basic Chemistry of Chlorination Chlorine (Cl 2) is a gas, heavier than air, toxic, non-flammable and an economically available oxidizing agent that