Why Does the Minimum Wage Have No Discernible Effect on ...

CEPR Why Does the Minimum Wage Have No Discernible Effect on Employment? i About the Authors John Schmitt is a Senior Economist at the Center for Economic and Policy Research in Washington,

2 17. 5. Higher prices ..18. 6. Improvements in efficiency ..18. 7. "Efficiency wage " responses from workers ..19. 8. wage 9. Reduction in profits ..20. 10. Increases in demand ( Minimum wage as stimulus) ..20. 11. Reduced turnover ..21. Discussion ..22. Conclusion ..22. References ..24. About the Authors John Schmitt is a Senior Economist at the Center for Economic and Policy Research in Washington, Acknowledgements Acknowledgments: CEPR thanks the Ford Foundation for financial support. The author thanks Eileen Appelbaum, Dean Baker, Heather Boushey, Janelle Jones, and Michael Reich for many helpful comments; and Chris Doucouliagos and Tom Stanley for kindly supplying the data for Figure 1. CEPR Why Does the Minimum wage Have No Discernible Effect on Employment? 1. Executive Summary The employment Effect of the Minimum wage is one of the most studied topics in all of economics. This report examines the most recent wave of this research roughly since 2000 to determine the best current estimates of the impact of increases in the Minimum wage on the employment prospects of low- wage workers.

3 The weight of that evidence points to little or no employment response to modest increases in the Minimum wage . The report reviews evidence on eleven possible adjustments to Minimum - wage increases that may help to explain why the measured employment effects are so consistently small. The strongest evidence suggests that the most important channels of adjustment are: reductions in labor turnover;. improvements in organizational efficiency; reductions in wages of higher earners (" wage compression"); and small price increases. Given the relatively small cost to employers of modest increases in the Minimum wage , these adjustment mechanisms appear to be more than sufficient to avoid employment losses, even for employers with a large share of low- wage workers. CEPR Why Does the Minimum wage Have No Discernible Effect on Employment? 2. Introduction The employment Effect of the Minimum wage is one of the most studied topics in all of economics.

5 Four years and $17 million later, the MWSC released a 250-page summary report1 and six additional volumes of related research In their independent summary of the research reviewed in the MWSC, Brown, Gilroy, and Kohen, three economists involved in producing the report, distinguished between employment effects on: teenagers (ages 16-19), where they concluded that a 10 percent increase in the Minimum wage reduced teen employment, most plausibly, from between zero and percent; young adults (ages 20-24), where they believed the employment impact is negative and smaller than that for teenagers ; and adults, where the direction of the uncertain in the empirical work as it is in the theory. 3, 4 Their summary of the theoretical and empirical research through the late 1970s suggested that any "disemployment". effects of the Minimum wage were small and almost exclusively limited to teenagers and possibly other younger workers.

6 For a decade, the MWSC's conclusions remained the dominant view in the economics profession. By the early 1990s, however, several researchers had begun to take a fresh look at the Minimum wage . The principal innovations of what came to be known as "the new Minimum wage research". were the use of "natural experiments" and cross-state variation in the "bite" of the Minimum wage . 1 Minimum wage Study Commission (1981). 2 For an overview of the workings of MWSC and a review of its main findings, see Eccles and Freeman (1982). For a lengthy review of the MWSC's finding, prepared by three economists involved in preparation of the MWSC report, see Brown, Gilroy, and Kohen (1982). 3 Brown, Gilroy, and Kohen (1982), p. 524. 4 The employment impact on adults is uncertain in theory because an increase in the Minimum wage might encourage employers to replace some (presumably lower productivity) teenagers with more (presumably higher productivity).

7 Adults. CEPR Why Does the Minimum wage Have No Discernible Effect on Employment? 3. Natural experiments sought to reproduce in the real world some of the features of a laboratory experiment. In the context of the Minimum wage , these natural experiments typically measured the employment impact of a single instance of a policy change (an increase in a state or the federal Minimum wage ) by comparing a group of workers directly affected by the change (teenagers in a state where the Minimum wage increased, for example) with a similar group that was not affected (teenagers in a neighboring state where the Minimum did not change). Without a doubt, the most influential of the studies using a natural experiment was David Card and Alan Krueger's (1994) paper on the impact on fast-food employment of the 1992 increase in the New Jersey state Minimum In advance of the 1992 increase in the New Jersey state Minimum wage , Card and Krueger conducted their own telephone survey of fast-food restaurants in New Jersey and neighboring Pennsylvania.

8 They repeated the survey after the increase had gone into Effect and then compared the change in employment in New Jersey's restaurants (the Minimum wage treatment group) with what happened in Pennsylvania (the control group). They found "no evidence that the rise in New Jersey's Minimum wage reduced employment at fast-food restaurants in the state."6, 7. The "New Minimum wage " research also emphasized research methods based on important differences in the "bite" of the federal Minimum across the states. Any given increase in the federal Minimum , the thinking went, should have more impact in low- wage states, where many workers would be eligible for an increase, than it would in high- wage states, where a smaller share of the workforce would be affected. Card, for example, divided the states into three groups low- impact, medium-impact, and high-impact according to the share of their teenage workforce that would be affected by the 1990 and 1991 increases in the federal Minimum wage .

9 His analysis concluded: "Comparisons of grouped and individual state data confirm that the rise in the Minimum wage raised average teenage On the other hand, there is no evidence that the rise in the Minimum wage significantly lowered teenage employment "8. Card and Krueger's book Myth and Measurement: The New Economics of the Minimum wage is the best (though early) summary of these two strands of the "new Minimum wage " research. Their detailed review of studies using a variety of methods and datasets to examine restaurant workers, retail employment, and teenagers, concludes: "The weight of this evidence suggests that it is very unlikely that the Minimum wage has a large, negative employment Effect ."9. Myth and Measurement also inspired a considerable response from economists more critical of the Minimum wage . David Neumark and William Wascher's book Minimum Wages brings together much of this critique, with an emphasis on their own work.

10 In Neumark and Wascher's assessment, the most reliable recent research on the Minimum wage has built on the earlier time-series analysis that informed the main conclusions of the MWSC. This new generation of time-series analysis typically 5 Other important studies along these lines include Card's (1992a) analysis of the impact of the 1988 increase in California's state Minimum wage and Katz and Krueger's (1992) study of the impact of the 1990 and 1991 increases in the federal Minimum wage . 6 Card and Krueger (1994), p. 792. 7 Economists David Neumark and William Wascher (2000) criticized Card and Krueger's study, arguing that the survey was poorly designed and implemented. Card and Krueger (2000) responded by confirming their original results using payroll records from a virtual census of fast-food restaurants in New Jersey and eastern Pennsylvania. 8 Card (1992b), p. 36. 9 Card and Krueger (1995), pp. 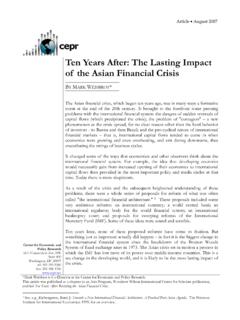 Ten Years After: The Lasting Impact of the Asian …

The Asian financial crisis, which began ten years ago, was in many ways a formative event at the end of the 20th century. It brought to the forefront some pressing 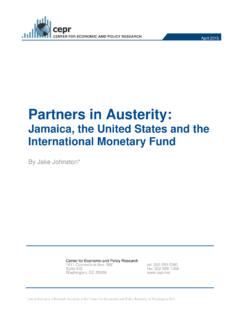 CEPR The Changing Face of Labor, 1983-2008 1 Executive Summary Over the last quarter century, the unionized workforce has changed dramatically. 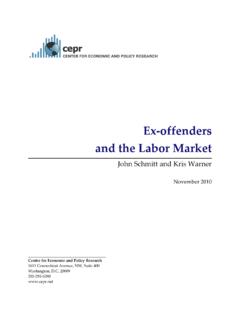 John Schmitt is a Senior Economist and Kris Warner is a Program Assistant at the Center for Economic and Policy Research, in Washington, D.C. private equity buyout funds will find that PE’s promise of superior performance is elusive: for most investors, PE returns now more or less match the market. Moreover, the negative impact of private 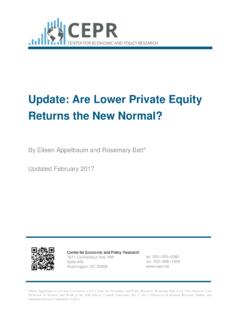 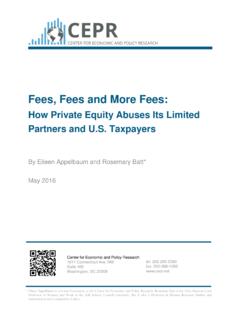 Fees, Fees and More Fees: How Private Equity Abuses Its Limited Partners and U.S. Taxpayers 1 “One nice thing about running a private equity firm is that you get to sit between investors who have money and companies who need it, and send both of them bills.

Bolivia’s foreign-denominated public debt, it does not pose a short- or medium-term risk, mainly because it is very long-term and also concessional (i.e., at well below market interest rates). Bolivian authorities are promoting important investments in food sovereignty and are striving to For example, if a commissioned employee earns $200 in a 40-hour workweek (including all commissions) and the current minimum wage is $10 per hour, Arizona’s minimum wage laws PLEASE POST NEXT TO YOUR IWC OR INDUSTRY OCCUPATION ORDER OFFICIAL NOTICE California Minimum Wage MW-2017 Minimum Wage — Every employer shall pay to each employee hourly wages not less than the following.

The Effects of a Minimum-Wage Increase on Employment and ...

CBO Notes Estimates of the effect on employment of the options to increase the minimum wage are rounded to the nearest 100,000 workers. Numbers in the text, tables, and figures may not add up to totals because of rounding. 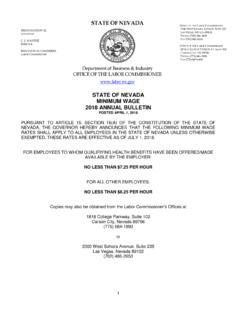 Service or Tipped Employees – “A service or tipped employee” means an employee of a hotel, motel, tourist place, or restaurant who customarily and regularly receives Examples. Minimum Wage and Overtime. The calculations and examples below are based on . the minimum wage rate of $11.25 per hour, and the applicable minimum overtime rate (1.5 times the