3 Define three sums of squares and cross products matrices, ST, SW, and SA, as follows ()()SXMXMT kikiiNkKk= == 11' ()()SXMXMW kikkikiNkKk= == 11' SSSATW= Next, define two degrees of freedom values, df1 and df2: dfK11= dfNK2= A Discriminant function is a weighted average of the values of the independent variables. The weights are selected so that the resulting weighted average separates the observations into the groups. High values of the average come from one group, low values of the average come from another group. The problem reduces to one of finding the weights which, when applied to the data, best discriminate among groups according to some criterion. The NCSS Statistical Software Discriminant Analysis 440-2 NCSS, LLC. All Rights Reserved. solution reduces to finding the eigenvectors, V, of SSWA 1. The canonical coefficients are the elements of these eigenvectors.

4 A goodness-of-fit parameter, Wilks lambda, is defined as follows: =|S||S|=11 +WTj =1mj where j is the jth eigenvalue corresponding to the eigenvector described above and m is the minimum of K-1 and p. The canonical correlation between the jth Discriminant function and the independent variables is related to these eigenvalues as follows: jcjjr=1+ Various other matrices are often considered during a Discriminant Analysis . The overall covariance matrix, T, is given by: T =1N- 1ST The within-group covariance matrix, W, is given by: W=1N- KSW The among-group (or between-group) covariance matrix, A, is given by: A=1K-1SA The linear Discriminant functions are defined as: k-1kLDF=WM The standardized canonical coefficients are given by: ijijvw where vij a re the elements of V and wij are the elements of W. The correlations between the independent variables and the canonical variates are given by: jkjji =1pikjiCorr=1wvw NCSS Statistical Software Discriminant Analysis 440-3 NCSS, LLC.

5 All Rights Reserved. Discriminant Analysis Checklist Tabachnick (1989) provides the following checklist for conducting a Discriminant Analysis . We suggest that you consider these issues and guidelines carefully. Unequal Group Size and Missing Data You should begin by screening your data. Pay particular attention to patterns of missing values. When using Discriminant Analysis , you should have more observations per group than you have independent variables. If you do not, there is a good chance that your results cannot be generalized, and future classifications based on your Analysis will be inaccurate. Unequal group size does not influence the direct solution of the Discriminant Analysis problem. However, unequal group size can cause subtle changes during the classification phase. Normally, the sampling frequency of each group (the proportion of the total sample that belongs to a particular group) is used during the classification stage.

6 If the relative group sample sizes are not representative of their sizes in the overall population, the classification procedure will be erroneous. (You can make appropriate adjustments to prevent these erroneous classifications by adjusting the prior probabilities.) NCSS ignores rows with missing values. If it appears that most missing values occur in one or two variables, you might want to leave these out of the Analysis in order to obtain more data and hence more accuracy. Multivariate Normality and Outliers Discriminant Analysis does not make the strong normality assumptions that MANOVA does because the emphasis is on classification. A sample size of at least twenty observations in the smallest group is usually adequate to ensure robustness of any inferential tests that may be made. Outliers can cause severe problems that even the robustness of Discriminant Analysis will not overcome.

7 You should screen your data carefully for outliers using the various univariate and multivariate normality tests and plots to determine if the normality assumption is reasonable. You should perform these tests on one group at a time. Homogeneity of Covariance Matrices Discriminant Analysis makes the assumption that the group covariance matrices are equal. This assumption may be tested with Box s M test in the Equality of Covariances procedure or looking for equal slopes in the Probability Plots. If the covariance matrices appear to be grossly different, you should take some corrective action. Although the inferential part of the Analysis is robust, the classification of new individuals is not. These will tend to be classified into the groups with larger covariances. Corrective action usually includes the close screening for outliers and the use of variance-stabilizing transformations such as the logarithm.

8 Linearity Discriminant Analysis assumes linear relations among the independent variables. You should study scatter plots of each pair of independent variables, using a different color for each group. Look carefully for curvilinear patterns and for outliers. The occurrence of a curvilinear relationship will reduce the power and the discriminating ability of the Discriminant equation. NCSS Statistical Software Discriminant Analysis 440-4 NCSS, LLC. All Rights Reserved. Multicollinearity and Singularity Multicollinearity occurs when one predictor variable is almost a weighted average of the others. This collinearity will only show up when the data are considered one group at a time. Forms of multicollinearity may show up when you have very small group sample sizes (when the number of observations is less than the number of variables). In this case, you must reduce the number of independent variables.

9 Multicollinearity is easily controlled for during the variable selection phase. You should only include variables that show an R with other X s of less than See the Chapter on Multiple Regression for a more complete discussion of multicollinearity. Data Structure The data given in the table below are the first eight rows (out of the 150 in the database) of the famous iris data published by Fisher (1936). These data are measurements in millimeters of sepal length, sepal width, petal length, and petal width of fifty plants for each of three varieties of iris: (1) Iris setosa, (2) Iris versicolor, and (3) Iris virginica. Note that Iris versicolor is a polyplid hybrid of the two other species. Iris setosa is a diploid species with 38 chromosomes, Iris virginica is a tetraploid, and Iris versicolor is a hexaploid with 108 chromosomes. Discriminant Analysis finds a set of prediction equations, based on sepal and petal measurements, that classify additional irises into one of these three varieties.

10 Here Iris is the dependent variable, while SepalLength, SepalWidth, PetalLength, and PetalWidth are the independent variables. Fisher dataset (subset) SepalLength SepalWidth PetalLength PetalWidth Iris 50 33 14 2 1 64 28 56 22 3 65 28 46 15 2 67 31 56 24 3 63 28 51 15 3 46 34 14 3 1 69 31 51 23 3 62 22 45 15 2 Missing Values If missing values are found in any of the independent variables being used, the row is omitted. If they occur only in the dependent (categorical) variable, the row is not used during the calculation of the prediction equations, but a predicted group (and scores) is calculated. This allows you to classify new observations. NCSS Statistical Software Discriminant Analysis 440-5 NCSS, LLC. All Rights Reserved. Example 1 Discriminant Analysis This section presents an example of how to run a Discriminant Analysis . The data used are shown in the table above and found in the Fisher dataset. 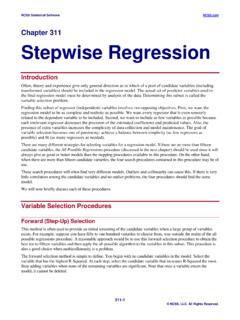 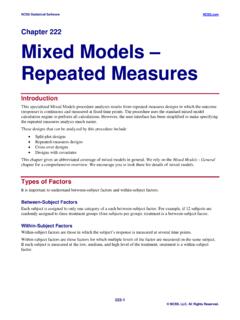 Mixed Models – Repeated Measures Introduction ... analysis, and the amount of data available for the analysis. When more than one fixed factor may influence the 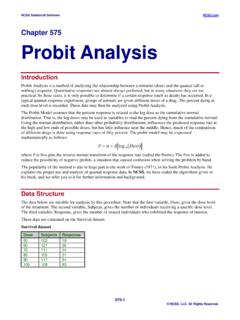 Chapter 575 Probit Analysis Introduction Probit Analysis is a method of analyzing the relationship between a stimulus (dose) and the quantal (all or nothing) response. Quantitative responses are almost always preferred, but in many situations they are not practical. In these cases, it is only possible to determine if a certain response (such as ... 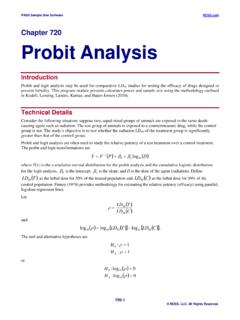 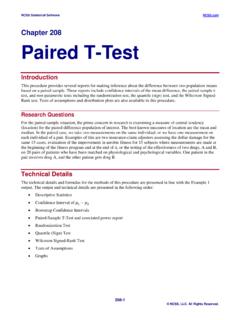 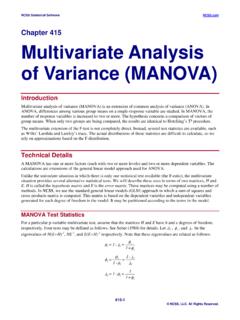 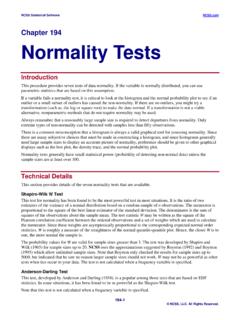 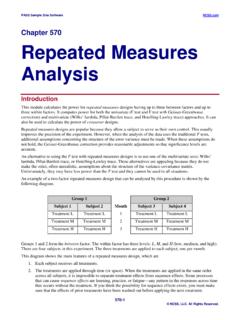 This section provides the technical details of the repeated measures designs that can be analyzed by PASS. Earlier ... Repeated Measures Analysis ... 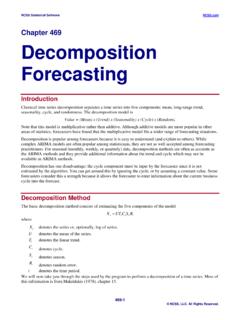 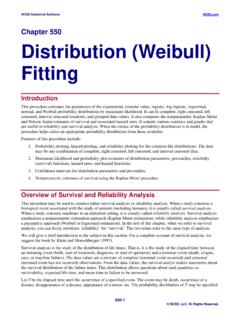 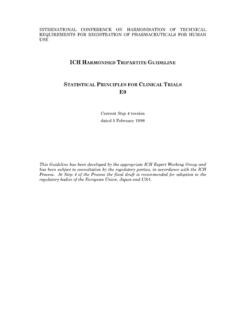 specific statistical procedures or methods. Specific procedural steps to ensure that principles are implemented properly are the responsibility of the sponsor. Integration of data across clinical trials is discussed, but is not a primary focus of this guidance. Selected principles and procedures related to data management or clinical trial 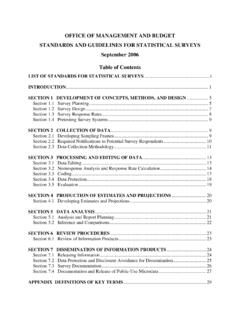 Standards and Guidelines for Statistical Surveys

SECTION 6 REVIEW PROCEDURES Review of Information Products Standard 6.1: Agencies are responsible for the quality of information that they disseminate and must institute appropriate content/subject matter, statistical, and methodological review procedures to comply with OMB and agency Information Quality Guidelines. 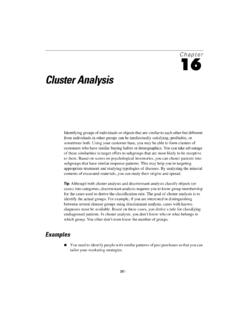 SPSS has three different procedures that can be used to cluster data: hierarchical cluster analysis, k-means cluster, and two-step cluster. They are all described in this chapter. If you have a large data file (even 1,000 cases is large for clustering) or a mixture of continuous and categorical variables, you should use the SPSS two-step procedure. 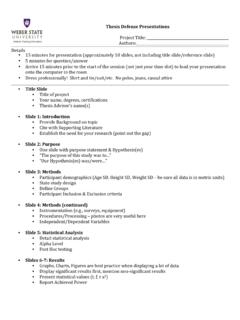