1. Chapter 7: Anger and Aggression Introduction An Overview of Anger Statistics o Definition of terms o Recognizing Anger Hidden Anger passive-aggressiveness How angry are you? o A case of jealous Anger Understanding Anger : Theories and facts o How much hatred is there in the world? The 2002 WHO Report o How do we get so angry? Sternberg's theory o How Anger interacts with other emotions and factors o Are some people just evil ? o The control of emotions Society tries to control meanness with punishment Society doesn't try prevention o Innate, genetic, hormonal and physical factors o The Frustration- Aggression Hypothesis Displacement of Anger My conclusions about catharsis Historical overview: Frustration- Aggression Theory o Social Learning Theory o Aggression and child rearing practices o Self-hatred and self-reports describing Anger o Mental processes that generate Anger / Aggression Disliking people who are different Hating people for "no reason".

1 1. Chapter 7: Anger and Aggression Introduction An Overview of Anger Statistics o Definition of terms o Recognizing Anger Hidden Anger passive-aggressiveness How angry are you? o A case of jealous Anger Understanding Anger : Theories and facts o How much hatred is there in the world? The 2002 WHO Report o How do we get so angry? Sternberg's theory o How Anger interacts with other emotions and factors o Are some people just evil ? o The control of emotions Society tries to control meanness with punishment Society doesn't try prevention o Innate, genetic, hormonal and physical factors o The Frustration- Aggression Hypothesis Displacement of Anger My conclusions about catharsis Historical overview: Frustration- Aggression Theory o Social Learning Theory o Aggression and child rearing practices o Self-hatred and self-reports describing Anger o Mental processes that generate Anger / Aggression Disliking people who are different Hating people for "no reason".

2 Pain leads to Aggression o Internal dynamics of Aggression Psychoanalysis Anger -generating thoughts Put-down games & Psychological put-downs Anger , anxiety, guilt, depression, dependency and sex The effects of gender roles and cultural differences Psychological excuses for Aggression ; Anger may pay off Anger in intimate relationships o Marital conflict Dealing with the intimate enemy . Trying to get our way 2. Finding better ways to resolve Anger Psychological abuse in intimate relationships o Physical abuse of spouses and children How do we start being physical? Statistics about abuse of loved ones . How common is wife rape? Abuse within the family Why do women stay? Can abusers change? Long-term effects of abuse within the family Books and websites about domestic violence o Child abuse The consequences of child abuse or severe punishment Sources of information: Dealing with problem children Anger is usually a two-way street o Parent-teenager conflicts Getting closer again o Jealousy Distrusting others o How to become more trusting Disliking others without valid reasons: Prejudice o Unconscious prejudice o Understanding our own prejudices Allport and DuBois o Prejudice can take many forms o Extreme prejudice o You don't think you are prejudiced any more?

4 An angry situation is dangerous Dealing with an aggressive person o Coping with rape--a horrible crime o Dealing with a stalker o Recommended readings about aggressive people o Reducing the other person's Anger o The angry child or violent teen If you are a victim of violence or bullying Social-educational solutions to violence 4. Anger and Aggression This Chapter will provide (1) signs of Anger , (2) theories about how and why Aggression develops, and (3) means of preventing or coping with Anger (in yourself and in others). Introduction An Overview of Anger How we deal with stress, disappointments, and frustration determines the essence of our personality. In this Chapter we consider frustration and Aggression . Anger may do more harm than any other emotion.

5 First of all it is very common and, secondly, it upsets at least two people--the aggressor and the aggressed against. There are two problems: how to prevent or control your own Anger and how to handle someone aggressing against you. This Chapter attends more to self-control. The overall effects of Anger are enormous (Nay, 1996). Frustration tells us "I'm not getting what I want" and eventually Anger is related to violence, crime, spouse and child abuse, divorce, stormy relationships, poor working conditions, poor physical health (headaches, hypertension, GI disturbances, heart attacks), emotional disorders, and so on. Just how widespread is hostility? Very! Psychology Today (1983) asked, "If you could secretly push a button and thereby eliminate any person with no repercussions to yourself, would you press that button?

6 " 69% of responding males said yes, 56% of women. Men would most often kill the U. S. president or some public figure; women would kill bosses, ex-husbands or ex- boyfriends and former partners of current lovers. Another survey of college students during the 80's indicated that 15% agreed that "if we could wipe out the Soviet Union, and be sure they wouldn't be able to retaliate, we should do it." That action could result in over 100 million deaths! The respondents seemed to realize the great loss of life because 26% said, "the United States should be willing to accept 25 million to 50 million casualties in order to engage in nuclear war." What an interesting combination of intelligence and mass violence in the same species. In light of the subsequent disintegration of the Soviet Union, this kind of pugnacious, arrogant, uncaring thinking is really scary.

7 The problem was an unwillingness to carefully consider the atrocities of nuclear warfare plus a macho toughness engendered by the 1980's Cold War rhetoric. For reasons I hope to soon make clearer, Americans are amazingly violent compared to people in other countries. In 2002, approximately 290 million Americans suffered 23 million crimes. 23% of those crimes were crimes of violence. For every 1000. people over 12, there was one rape or sexual assault, another assault resulting in an injury, and two robberies. Yet, criminal violence is fairly predictable (not at some specific time but in general) in the sense that 50% of males convicted of a crime between 10 and 16-years-of-age will be convicted of more crimes as adults. Also, being exposed to violence in childhood (at home, in their community, & in the 5.)

8 Media) is associated with the child having poor health (Graham- Bermann & Seng, 2005) and with them being violent as an adult. We could do something about these things but we don't, perhaps because we believe Aggression is just human nature . and/or because we are angry and thus indifferent to stressed kids, especially if they are of another race or a different economic or ethnic group. Also, our society is far more insistent on punishing rather than preventing adolescent violence/crime/misbehavior (another reflection of our own Anger ?). Great atrocities are attributed to crazed men--Hitler, Stalin, terrorists, etc. But, several Psychological studies cited in this and the next Chapter suggest that ordinary people can rather easily become evil enough to discriminate against, hurt, and brutalize others.

9 Likewise, Goldhagen (1995) has documented that ordinary Germans by the thousands rounded up and executed millions of Jews. It isn't just the prejudiced and deranged that brutalize. There is scary evidence that almost all of us might, under the right conditions, develop a tolerance or a rationalization for injustice. Even the most moral among us may look the other way (certainly the many murderers in Germany and Russia talked to priests, ministers, town officials, etc.). German doctors performed atrocious experiments in concentration camps. Each of us strongly resist thinking of ourselves as potentially mean or bad, yet there is evidence we can be persuaded to do awful things by leaders and governments. Interestingly, we have little trouble believing that others are bad and immoral.

10 Storr (1994) attempts to explain intense human hatred and cruelty to others, such as genocide and racial or religious conflict. Concerning hatred, we are psychologically still in the dark ages. The crime rate soars in the and our prisons overflow; infidelity and spouse abuse are high; 1 in 5 women has been raped, 683,000 women were raped in 1990 (30% were younger than 11!); our murder rate is several times higher than most other countries. We are prejudiced. We distrust and dislike others. Even within the family--supposedly our refuge, our safe place, our source of love--there is much violence. Between 1/4 and 1/2 of all wives have been physically battered which causes great Psychological trauma too (Goodman, Koss, & Russo, 1993). Physical fights have occurred within 12- 16% of all marriages during the last year. 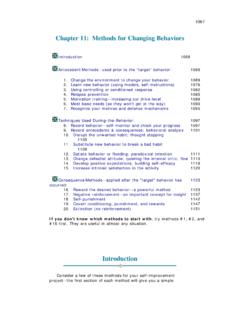 1068 introduction to the procedure. You only need one or two methods to start with. For basic information about changing your behavior, it is best to

1 Chapter 4: Behavior, Motivation and Self-Control In chapter 2, we considered the general steps in self-help and what specifically we would like to change about ourselves.

Control, Chapter, Self, Motivation, Behavior, Motivation and self control

Methods for Gaining Insight into Ourselves

1491 Chapter 15: Methods for Gaining Insight into Ourselves Page Introduction to Insight 1492 1. Becoming open-minded: to consider the possibility that 1496

Methods, Into, Insights, Ourselves, Gaining, Methods for gaining insight into ourselves 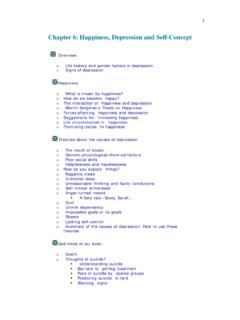 Chapter 6: Happiness, Depression and Self-Concept Overview o Life history and gender factors in depression o Signs of depression Happiness o What is meant by happiness? ... and could use self-help. Overall, depression costs the country more in treatment and lost work than heart disease. Are some people just naturally happy?

Concept, Help, Self, Depression, Happiness, Depression and self concept 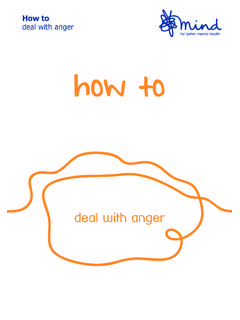 How to deal with anger how to - Mind

4 5 Not everyone expresses anger in the same way. For example, some unhelpful ways you may have learned to express anger include: • Outward aggression and violence – such as shouting, swearing,

With, Ranges, Deal, Aggression, How to deal with anger 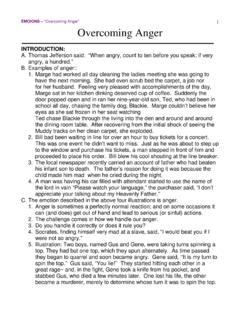 Creative Strategies for the Treatment of Anger

Creative Strategies for the Treatment of Anger Diane E Frey, Ph.D, RPT‐S Probably the most common underlying emotion many clients experience is one of anger. 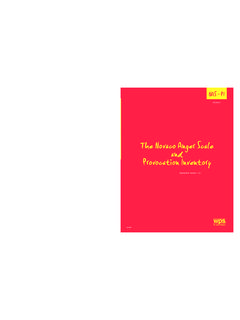 Understanding Anger is adapted in part from a core set of materials developed by Matrix, Inc. (at UCLA) and NDRI for relapse prevention group work. 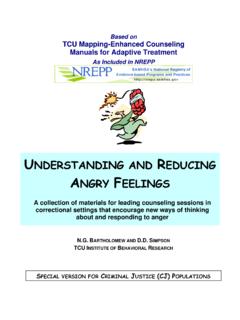 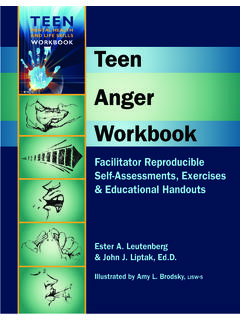 Layout of the Book The Teen Anger Workbook is designed to be used either independently or as part of an integrated curriculum. You may administer one of the assessments and the journaling 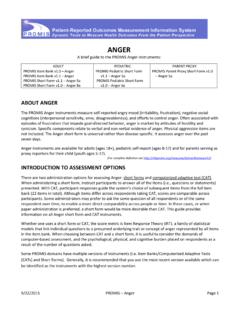