2 Rule 22e-4 also requires principal underwriters and depositors of unit Investment trusts ( UITs ) to engage in a limited Liquidity review. The Commission is also adopting amendments to Form N-1A regarding the disclosure of fund policies concerning the redemption of fund shares. The Commission also is adopting new rule 30b1-10 and Form N-LIQUID that generally will require a fund to confidentially notify the Commission when the fund's level of illiquid investments that are assets exceeds 15% of its net assets or when its highly liquid investments that are assets fall below its minimum for more than a specified period of time. The Commission also is adopting certain sections of Forms N-PORT and N-CEN that will require disclosure of 1. certain information regarding the Liquidity of a fund's holdings and the fund's Liquidity risk Management practices. DATES: Effective Dates: This rule is effective January 17, 2017 except for the amendments to Form N-CEN (referenced in 17 CFR ) which are effective June 1, 2018.

4 ( Securities Act ) [15 77a et seq.]; and adopting sections to Form N-PORT [referenced in 2. 17 CFR ] and Form N-CEN [referenced in 17 CFR ] under the Investment Company Act. 1. TABLE OF CONTENTS: I. 5. II. BACKGROUND .. 11. A. OPEN-END 11. B. THE ROLE OF Liquidity IN OPEN-END FUNDS .. 14. C. RECENT DEVELOPMENTS IN THE OPEN-END FUND INDUSTRY .. 34. D. OVERVIEW OF CURRENT PRACTICES .. 39. E. RULEMAKING ADOPTION OVERVIEW .. 41. III. DISCUSSION .. 46. A. PROGRAM REQUIREMENT AND SCOPE OF RULE 22E-4 .. 46. B. ASSESSMENT, Management , AND REVIEW OF Liquidity RISK .. 54. C. CLASSIFYING THE Liquidity OF A FUND'S PORTFOLIO INVESTMENTS, AND DISCLOSURE AND. REPORTING REQUIREMENTS REGARDING PORTFOLIO INVESTMENTS' Liquidity . CLASSIFICATIONS .. 89. D. HIGHLY LIQUID Investment 195. E. LIMITATION ON FUNDS' ILLIQUID INVESTMENTS .. 230. F. POLICIES AND PROCEDURES REGARDING REDEMPTIONS IN KIND.

5 239. G. CROSS-TRADES .. 243. H. BOARD APPROVAL AND DESIGNATION OF PROGRAM ADMINISTRATIVE RESPONSIBILITIES 249. I. RECORDKEEPING REQUIREMENTS .. 259. 1. Unless otherwise noted, all references to statutory sections are to the Investment Company Act, and all references to rules under the Investment Company Act are to Title 17, Part 270 of the Code of Federal Regulations [17 CFR 270]. 3. J. 260. K. LIMITATION ON UNIT Investment TRUSTS' INVESTMENTS IN ILLIQUID INVESTMENTS .. 279. L. DISCLOSURE AND REPORTING REQUIREMENTS REGARDING Liquidity RISK AND Liquidity . RISK Management .. 282. M. EFFECTIVE AND COMPLIANCE DATES .. 307. IV. ECONOMIC ANALYSIS .. 310. A. INTRODUCTION AND PRIMARY GOALS OF REGULATION .. 310. B. ECONOMIC BASELINE .. 315. C. BENEFITS AND COSTS, AND EFFECTS ON EFFICIENCY, COMPETITION, AND CAPITAL. FORMATION .. 328. V. PAPERWORK REDUCTION ACT ANALYSIS .. 396. A. INTRODUCTION.

6 396. B. RULE 397. C. FORM N-PORT .. 409. D. FORM N-LIQUID AND RULE 30B1-10 .. 418. E. FORM N-CEN .. 421. F. FORM N-1A .. 423. VI. Final REGULATORY FLEXIBILITY ACT ANALYSIS .. 428. A. NEED FOR THE RULE .. 429. B. SIGNIFICANT ISSUES RAISED BY PUBLIC COMMENT .. 430. C. SMALL ENTITIES SUBJECT TO THE RULE .. 431. D. PROJECTED REPORTING, RECORDKEEPING, AND OTHER COMPLIANCE REQUIREMENTS .. 431. E. AGENCY ACTION TO MINIMIZE EFFECT ON SMALL ENTITIES .. 435. VII. STATUTORY AUTHORITY AND TEXT OF 436. TEXT OF RULES AND FORMS .. 437. 4. I. INTRODUCTION. Redeemability is a defining feature of open-end Investment companies. 2 At the time the Act was adopted, this feature was recognized as unique to open-end Investment companies, 3 and the Act's classification of Management Investment companies as either open-end ( open-end funds or funds ) 4 or closed-end, upon which several of the Act's other provisions depend, turns on whether the Investment Company 's shareholders have the right to redeem their shares on demand.

8 3. See Investment Trusts and Investment Companies: Hearings on S. 3580 before a Subcomm. of the Senate Comm. on Banking and Currency, 76th Cong., 3d Sess. (1940) ( 1940 Senate Hearings Transcript ), at 453. (Statement of Mahlon E. Traylor) ( Open-end companies are unlike any other type of Investment Company , principally because of the highly important distinguishing feature that their shareholders can, by contract right, withdraw their proportionate interest at will simply by surrendering their shares to the Company for redemption at liquidating value. ). 4. In-Kind ETFs (as defined below) are included when we refer to funds or open-end funds throughout this Release, except in the sections discussing classifying the Liquidity of a fund's portfolio positions and the highly liquid Investment minimum requirement, from which In-Kind ETFs are excepted. We have done this for conciseness and we recognize that these naming conventions differ from the text of rule 22e-4.

9 Additionally, while a money market fund is an open-end Management Investment Company , money market funds are not subject to the rules and amendments we are adopting (except certain amendments to Form N- CEN and Form N-1A) and thus are not included when we refer to funds or open-end funds in this Release except where specified. 5. See Investment Trusts and Investment Companies: Hearings on 10065 before a Subcomm. of the House Comm. on Interstate and Foreign Commerce, 76th Cong., 3d Sess. 112 (1940), at 57 (Statement of Robert E. Healy) ( due to the right of the stockholder to come in and demand a redemption, the [open-end fund] has to keep itself in a very liquid position. That is, it has to be able to turn its securities into money on very short notice. ). 5. may limit their ability to participate in certain transactions in the capital markets. 6 Section 22(e). of the Act enforces the shareholder's right of prompt redemption in open-end funds by compelling such funds to make payment on shareholder redemption requests within seven days of receiving the request.

10 Potential dilution of shareholders' interests in open-end funds also was a significant concern of Congress when drafting the Act and was among the noted abuses that led to the enactment of the Act, as reflected in sections 22(a) and (c). 7. Although the Investment Company Act provides funds with a seven-day window to pay proceeds upon an investor's redemption, the settlement period for open-end fund redemptions has shortened considerably over the years. There are several reasons for shorter settlement periods, including broker-dealer settlement cycle requirements, 8 evolving industry standards, and technological advances in the settlement infrastructure. 9 In addition, many funds state in their prospectuses that investors can ordinarily expect to receive redemption proceeds in shorter 6. See Investment Trusts and Investment Companies: Report of the Securities and Exchange Commission (1942), at 76 ( Open-end Investment companies, because of their security holders' right to compel redemption of their shares by the Company at any time, are compelled to invest their funds predominantly in readily marketable securities.)

A Plain English Handbook How to create clear SEC disclosure documents By the Office of Investor Education and Assistance . U.S. Securities and Exchange Commission

Compliance Date: Issuers must comply with the final rule for the calendar year beginning January 1, 2013 with the first reports due May 31, 2014.

XIII. Final Regulatory Flexibility Analysis A. Reasons for, and Objectives of, the New Rules and Amendments B. Significant Issues Raised by Commenters 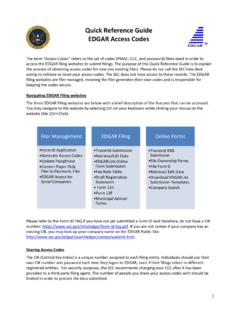 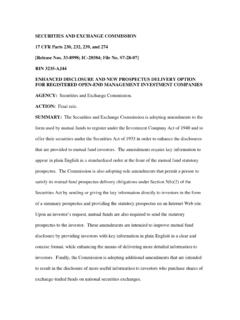 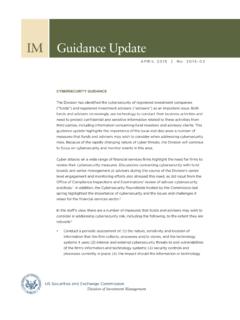 IM GUIDANCE UPDATE 2 systems become compromised; and (5) the effectiveness of the governance structure for the management of cybersecurity risk. 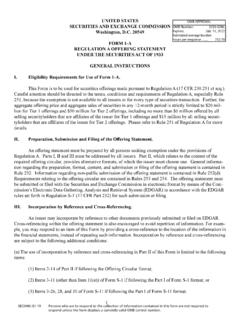 united states securities and exchange commission washington, d.c. 20549 . form 1-a regulation a offering statement under the securities act of 1933 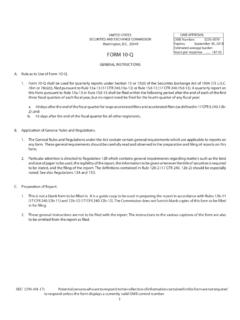