, ~ .. :' ilizarov Technology DROR PALEY, , . ' HARRY F. KOVELMAN, ; j:OHN E. HERZENBERG, , .' '. ':::'}' n 1951, Professor Gavriil Abramovich ilizarov from Kurgan in the 80- '/,;, :viet Union developed a circular external flxator forthe treatment of . fractures (Fig 1); Dilling the next decade, ilizarov discovered the tech- , , -niques 'of physeal distraction, corticotomy lengthening, bone transport, and many others. The common basis for all of these methods he called "the, theory of tension stress?" Z Through controlled, mechanically applied tension stress, ilizarov was able to show that bone and soft tissue can be made to regenerate in a reliable and reproducible manner.

1 , ~ .. :' ilizarov Technology DROR PALEY, , . ' HARRY F. KOVELMAN, ; j:OHN E. HERZENBERG, , .' '. ':::'}' n 1951, Professor Gavriil Abramovich ilizarov from Kurgan in the 80- '/,;, :viet Union developed a circular external flxator forthe treatment of . fractures (Fig 1); Dilling the next decade, ilizarov discovered the tech- , , -niques 'of physeal distraction, corticotomy lengthening, bone transport, and many others. The common basis for all of these methods he called "the, theory of tension stress?" Z Through controlled, mechanically applied tension stress, ilizarov was able to show that bone and soft tissue can be made to regenerate in a reliable and reproducible manner.

2 Over the next ,Ai years until his death in 1992 at the age of71,he developed countless 'clinical applications .of bone and soft tissue regeneration. In North America, experience with the technique dates back to 1986. Currently, the most common indications for the ilizarov technique are as Iollows: (1) limb lengthening; (2) treatment of nonunlons, bone and soft- .*suedefects, and osteomyelitis; (3) correction of bony deformities, joint contracture deformities, and even contour deformities of-the, limbs; (4). aitlITodesis; and (5) treatment of 'fractures anddislocatiOIis. ':tLIZAROV APPARAtUS. The ilizarov apparatus is a circular external fixator that gains fixation to hone through smooth or beaded Kirschner wires of or rnm in di- ameter (Fig 2).

3 3 These are placed under tension and are oriented in mul- tiple direcitiOlis and multiple planes. More recently, h~lf-pins' together with wires are used as a hybrid system, or half-pins are used. alone, re- placing wires altogether>The key element appears to be the ring and not .-the wires. In addition to the rings arid wires, the ilizarov system consists of multiple parts with niuitipurpose designations, such as hinges, plates, andthreaded rods. The frame can 'be assembled in an almost unlimited number of variations and combinations, depending on the task at hand. H is not surprising that this system. has been labeled a human "erector [meeliario) 'set.]

4 " With the appropriate construct; li:inb 'segments can be moved around in space in any ,diredion to correct problems of length, rotation, translation, and angulation: One level can be placed under com- , ,pressiOn while another is placed under distraction. In the treatment of bone defects, intercalary segments of bone can be moved independently ofthe proximal and distal extremities of the bone without changing the Adval)ces in Operative Orthopaedics. vol 1. <91993, Mosby-Year Book. Inc. 243. 244 D. Paley, Kovelman, and Herzenberg FIGURE l. Professor Gavriil Abramovich ilizarov , 1921-1992. bone length. The latter maneuver is called bone transport, and is a tech.

5 Nique used to treat bone and soft-tissue defects. DISTRACTION OSTEOGENESIS. Under controlled mechanical conditions, an osteotomy that is distracted: apart will produce bone between the distracted bone ends. ilizarov showed that there is a variety of factors that will affect this new bone formation. These include the following: 1. The stability of fixation. 2. The type of osteotomy used. 3. The location of the osteotomy in the bone. 4. The presence of a diastasis between the bone ends. 5 .. The latency period prior to distraction. ilizarov Technology 245. FIGURE 2. ilizarov apparatus with multilevel, multiplanar, multidirectional wire fixation.

6 (From Paley D, Rumley TO, Kovelman H: Advances in Plastic and Reconstruc- tive Surgery, vol. 7. 1991, pp 1-40. Used by permission.). 6. The rate of distraction. 7. 'The rhythm of distraction. Comparing distraction osteogenesis under different frame stability 'conditions, ilizarov showed that more stable fixation produced better bone regeneration? In the same. experiment, he also varied the type of osteotomy performed. He (:;ompared an open osteotomy that transected the periosteum, cortex, and endosteum, to a percutaneous osteotomy that preservediUost of the periosteum and endosteum, to a completely closed osteoclasis in which there was no damage to the periosteum and the end- intact.)

7 The'preservation of these soft tis- 246 D. Paley, Kovelman, and Herzenberg sues decreased the time required for consolidation of the distraction and osteogenesis of new bone (regeneration). The completely closed osteocla- sis consolidated only slightly faster than did the percutaneous osteotomy. Based on these results, ilizarov 's recommendations are to use a percuta- neous subperiosteal cortical osteotomy called a "corticotomy.". Numerous authors have questioned the relative importance of endos- teal vs. periosteal preservation. Kojimoto and coworkers performed se- lective damage to the periosteum or endosteum." Transection of the peri- osteum delayed regenerate bone formation, whereas endosteal damage did not.

8 Zemba andcolleaglies compared corticotomy with endosteal sparing with osteotomy with endosteal transection in dogs and found no difference in consolidation time." Weiner and Paley (unpublished data). compared percutaneous subperiosteal osteotome corticotomy with percu- taneous subperiosteal Gigli saw corticotomy in 100 patients undergoing tibial metaphyseal proximal lengthening? In the former, endosteal pres- ervation is attempted; in the latter, the endosteum is transectedby the saw. No significant differences were found in bone consolidation time. The level of the bone cut also is a factor. The metaphyseal region is. known to have a very high osteogenetic potential compared to the dia- physeal region.

10 A latency period of 7 to 10 days has been shown to be optimal in a dog experimental model" In general, the two factors that relate to the latency of distraction are the age of the patient and the qual- ity of the corticotomy. the patient, the longer the latency pe- riod should be prior to distraction. The latency period allows the inflam- matory phase of fracture healing to subside, thereby enabling the distrac- tion to begin during the reparative phase when early osteogenesis normally is seen. Distraction of this newly formed callus has been termed "callotasis" (callus distraction).9 In a young child, 3 days is a sufficient latency period, whereas in an older child or a young adult, 5 to 7 days is preferable. 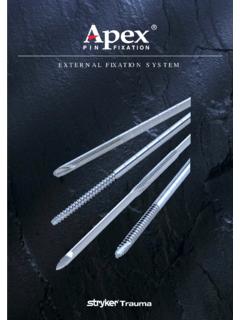 3 Cancellous Apex® Pins Designed for use in metaphyseal / epiphyseal areas i.e. in cancellous areas to ensure a higher pin stability and therefore a higher frame stability. 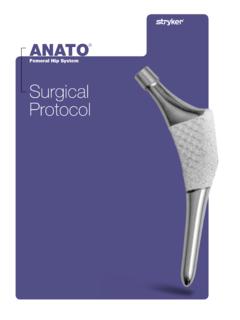 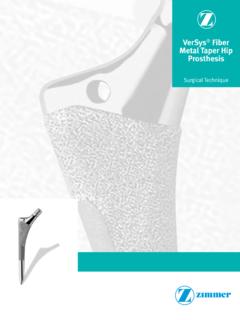