DNV GL 2014 SAFER, SMARTER, GREENERDNV GL 2014 Improving API 1104 for theTwenty-second Edition1 API-AGA Joint Committee on Oil and Gas Pipeline Field Welding PracticesBill Bruce SecretaryJanuary 17-19, 2017 JW Marriott Austin Austin, TexasDNV GL 2014 Introduction Twenty-second Edition of API 1104 is nominally scheduled for 2018 September 2013 (Twenty-first Edition ) plus five years Incremental improvements to the standard are developed at annual meeting and throughout the year by various subcommittees and task groups Important to occasionally step back and think about where we want to go with the standard in the long term , are we addressing emerging trends?

1 DNV GL 2014 SAFER, SMARTER, GREENERDNV GL 2014 Improving API 1104 for theTwenty-second Edition1 API-AGA Joint Committee on Oil and Gas Pipeline Field Welding PracticesBill Bruce SecretaryJanuary 17-19, 2017 JW Marriott Austin Austin, TexasDNV GL 2014 Introduction Twenty-second Edition of API 1104 is nominally scheduled for 2018 September 2013 (Twenty-first Edition ) plus five years Incremental improvements to the standard are developed at annual meeting and throughout the year by various subcommittees and task groups Important to occasionally step back and think about where we want to go with the standard in the long term , are we addressing emerging trends?

2 Opportunities for improvement to address two emerging trends will be level of ambiguity discussed at January 2016 weld strength matching Weld metal strength vs. strength of pipe material in axial direction Heat-affected zone (HAZ) softening Open discussion pertaining to other opportunities2 DNV GL in API 1104 discussed at January 2016 meeting API 1104 contains quite a bit of ambiguity For welding procedure qualification (and welder qualification) in particular , contains no guidance on what to specify on a welding procedure specification (WPS)

3 In relation to what was used to make the test weld Two schools of thought on this Allows flexibility for the user Creates confusion during audits Regulatory oversight has increased significantly in recent years Operators continue to reported issues as the result of ambiguity and differences in opinion it creates with regard to the intent of some of the requirements Violations of and (Welding Procedures) are often cited in notice of probable violations (NOPVs) ..must be recorded in in above and.

5 And its existence is unknown to mostusers of API 1104 We should use interpretations process anddatabase as basis for improvements4 DNV GL 2014 New ITG Ground Rules Requests for interpretation (particularly multiple requests about the same issue) are often a good indicator of an opportunity for improvement New ITG ground rules include a requirement to provide feedback to the relevant responses to the request must be developed with respect to what the standard currently saysand not what was intended . Note that intent may be a driver to forming a response only if the document language is not clear or the standard should (or meant to) saycan also be discussed, but this must not influence the response.

6 This discussion can be used as a basis for future improvements/revisions to the standard. A record of these potential improvements/revisions shall be provided to the relevant subcommittee chairs. ITG is now comprised of subcommittee chairs (since 2013) Formerly Modifications, Interpretation, and Policy Subcommittee5 DNV GL 2014 Previous Request for Interpretation and Response Question Paragraph states that "A change in the range for speed of travel constitutes an essential variable." and requires that the procedure be requalified if this range is changed.

7 How is the range of travel speed for each pass established? A) By measuring the travel speed of each pass during procedure qualification and listing the exact speeds employed by the welder for each pass. B) By establishing a reasonable range of travel speeds based on experience and/or experimentation at the filler metal manufacturers recommended amperage and voltage ranges and welding the procedure qualification coupon within that specified range. C) By some other method (Please explain). Answer The Company establishes the range that they feel is appropriate and one way is as you have suggested in B.

8 6 DNV GL 2014 What Can We Do to Convey Intent? These interpretation responses represent the intent of the committee A certain degree of flexibility is required in API 1104 Some pipelines are more high risk than others Generic procedures qualified to go in a welding manual Project specific procedures API 1104 needs to be scalable What can we do to convey the intent of the committee in the standard? Clarify the requirement in the standard itself? Use a tiered approach? Leave as-is for less-critical applications?

9 Supplemental essential variables and tighter allowable ranges for more-critical applications ( , for project specific applications)? Provide guidance note(s) after the requirement? Provide guidance in a commentary section or companion document?7 DNV GL 2014 How Do We Reduce Ambiguity? What improvements can we make toreduce ambiguity? , travel speed is an essential variable forprocedure qualification, yet ironically, whatAPI 1104 provides as an example procedurequalification record (PQR) does not even havea place to record travel speed Figure 2 Sample Coupon Test Report The lack of guidance on what to specify on aWPS with regard to what was used to makethe test weld, combined with the ability tospecify a very wide range (and the thought ofincreased regulatory oversight)

10 Encouragesusers to specify very wide ranges May be allowed May prevent welding outside the qualified range May not be technically sound for some applications8 DNV GL 2014 Additional Opportunities for Improvement Travel speed is an essential variable for procedure ..but amps and volts are not (can be changed to any value without requalification Main body of API 1104 does not consider the concept of heat input, whichtakes into account the collective effect of amps, volts, and travel speed ofthe resulting thermal cycle of the weld It is time to recognize heat input as optional essential variable to travel speed Preheat temperature only says the preheat temperature at the start of the weld shall be specified What is the start of the weld ?) 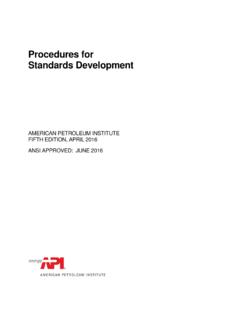 1 API Procedures for Standards Development 1 Scope 1.1 API Standards Committees The procedures established in this document govern the development of standards published by the American 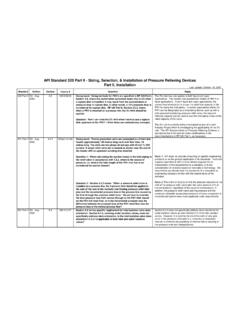 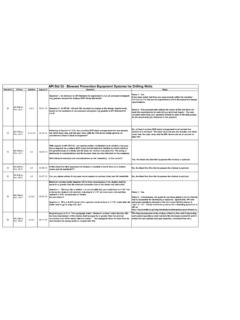 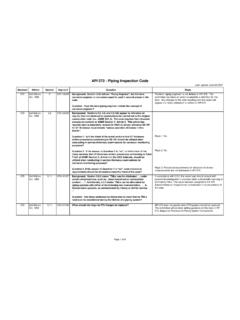 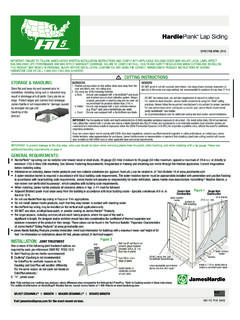 IMPORTANT: To prevent damage to the drip edge, extra care should be taken when removing planks from the pallet, while handling, and when installing with a lap gauge. A MESSAGE FROM . THE ACTING DIRECTOR OF THE U.S. OFFICE OF PERSONNEL MANAGEMENT. I am pleased to transmit the U.S. Office of Personnel Management’s (OPM’s) annual report to Congress on agencies’ use of student loan repayments as a strategic tool for the purposes of