7512 J. Org. Chem. 1997, 62, 7512-7515. NMR Chemical Shifts of Common Laboratory Solvents as Trace Impurities Hugo E. Gottlieb,* Vadim Kotlyar, and Abraham Nudelman*. Department of Chemistry, Bar-Ilan University, Ramat-Gan 52900, Israel Received June 27, 1997. In the course of the routine use of NMR as an aid for organic chemistry, a day-to-day problem is the identifica- tion of signals deriving from common contaminants (water, solvents, stabilizers, oils) in less-than-analyti- cally-pure samples. This data may be available in the literature, but the time involved in searching for it may be considerable. Another issue is the concentration dependence of chemical shifts (especially 1H); results obtained two or three decades ago usually refer to much Figure 1.

1 7512 J. Org. Chem. 1997, 62, 7512-7515. NMR Chemical Shifts of Common Laboratory Solvents as Trace Impurities Hugo E. Gottlieb,* Vadim Kotlyar, and Abraham Nudelman*. Department of Chemistry, Bar-Ilan University, Ramat-Gan 52900, Israel Received June 27, 1997. In the course of the routine use of NMR as an aid for organic chemistry, a day-to-day problem is the identifica- tion of signals deriving from common contaminants (water, solvents, stabilizers, oils) in less-than-analyti- cally-pure samples. This data may be available in the literature, but the time involved in searching for it may be considerable. Another issue is the concentration dependence of chemical shifts (especially 1H); results obtained two or three decades ago usually refer to much Figure 1.

2 Chemical shift of HDO as a function of tempera- more concentrated samples, and run at lower magnetic ture. fields, than today's practice. We therefore decided to collect 1H and 13C chemical dependent (vide infra). Also, any potential hydrogen- Published on October 17, 1997 on | doi: shifts of what are, in our experience, the most popular bond acceptor will tend to shift the water signal down- extra peaks in a variety of commonly used NMR field; this is particularly true for nonpolar solvents. In solvents, in the hope that this will be of assistance to contrast, in DMSO the water is already strongly the practicing chemist. hydrogen-bonded to the solvent, and solutes have only a Downloaded by UNIV OF PENN on August 4, 2009.

3 Negligible effect on its chemical shift. This is also true Experimental Section for D2O; the chemical shift of the residual HDO is very NMR spectra were taken in a Bruker DPX-300 instrument temperature-dependent (vide infra) but, maybe counter- ( and MHz for 1H and 13C, respectively). Unless intuitively, remarkably solute (and pH) independent. otherwise indicated, all were run at room temperature (24 ( 1 We then added 3 L of one of our stock solutions to C). For the experiments in the last section of this paper, probe the NMR tube. The chemical shifts were read and are temperatures were measured with a calibrated Eurotherm 840/T presented in Table 1. Except where indicated, the digital thermometer, connected to a thermocouple which was introduced into an NMR tube filled with mineral oil to ap- coupling constants, and therefore the peak shapes, are proximately the same level as a typical sample.)

4 At each essentially solvent-independent and are presented only temperature, the D2O samples were left to equilibrate for at least once. 10 min before the data were collected. For D2O as a solvent, the accepted reference peak ( . In order to avoid having to obtain hundreds of spectra, we ) 0) is the methyl signal of the sodium salt of 3-(trimeth- prepared seven stock solutions containing approximately equal ylsilyl)propanesulfonic acid; one crystal of this was added amounts of several of our entries, chosen in such a way as to prevent intermolecular interactions and possible ambiguities in to each NMR tube. This material has several disadvan- assignment. Solution 1: acetone, tert-butyl methyl ether, di- tages, however: it is not volatile, so it cannot be readily methylformamide, ethanol, toluene.

7 In D2O and respectively). CD3OD nitromethane was run separately, as the protons Carbon Spectra (Table 2). To each tube, 50 L of exchanged with deuterium in presence of triethylamine. the stock solution and 3 L of TMS1 were added. The solvent chemical shifts3 were obtained from the spectra Results containing the solutes, and the ranges of chemical shifts Proton Spectra (Table 1). A sample of mL of the solvent, containing 1 L of TMS,1 was first run on its (2) , the signal of the proton for the isotopomer with one less deuterium than the perdeuterated material, , CHCl3 in CDCl3 or own. From this spectrum we determined the chemical C6D5H in C6D6. Except for CHCl3, the splitting due to JHD is typically shifts of the solvent residual peak2 and the water peak. 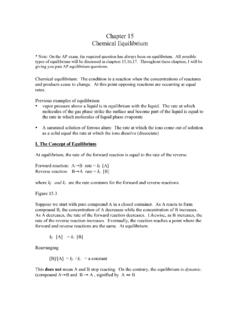 Chapter 15 Chemical Equilibrium * Note: On the AP exam, the required question has always been on equilibrium. All possible types of equilibrium will be discussed in chapters 15,16,17. 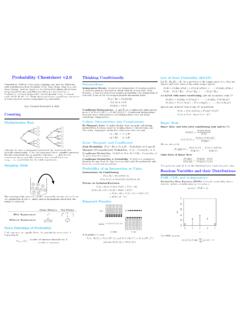 Moment Generating Functions MGF For any random variable X, the function M X(t) = E(e tX) is the moment generating function (MGF) of X, if it exists for all tin some open interval containing 0. 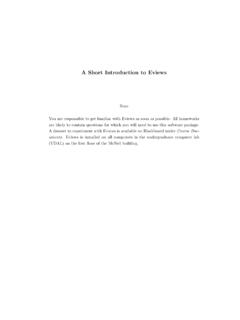 A Short Introduction to Eviews - sas.upenn.edu

A Short Introduction to Eviews 2 1 Getting help Please refer to the Eviews handbooks, which are very comprehensive. Of the two handbooks that accompany Eviews, the User’s Guide will be the more useful for you. 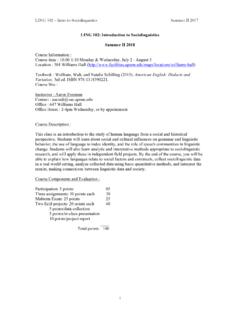 This class is an introduction to the study of human language from a social and historical perspective. Students will learn about social and cultural influences on grammar and linguistic 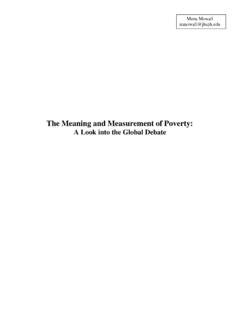 The Meaning and Measurement of Poverty

Rather than accepting national poverty lines that would treat poverty as a relative concept, the Bank adopted a method whereby all persons could be evaluated equally based on a single threshold of real consumption (Ravallion 2002).

Measurement, Poverty, Meaning, Thresholds, The meaning and measurement of poverty 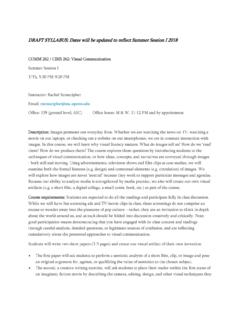 DRAFT SYLLABUS: Dates will be updated to reflect Summer ...

techniques of visual communication, or how ideas, concepts, and narratives are conveyed through images ... “The Rhetoric of Visual Arguments” in Defining Visual Rhetorics (eds. Charles Hill and Marguerite Helmers); and skim this classic (mostly for helpful 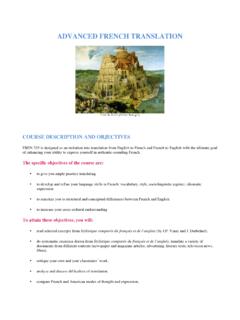 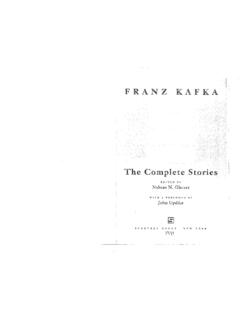 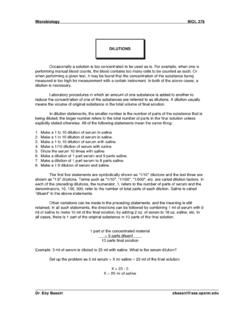 X = 20 ml of saline . Microbiology BIOL 275 Dr. Eby Bassiri ebassiri@sas.upenn.edu The serum dilution is the amount of serum in the amount of total solution; hence, this is a 5/25 serum dilution which would equal a 1/5 dilution. Titer The titer is the smallest amount … 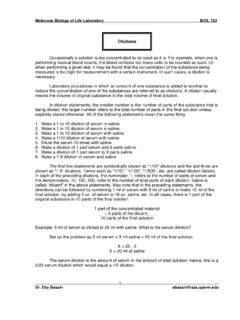 Molecular Biology of Life Laboratory BIOL 123 Dr. Eby Bassiri ebassiri@sas.upenn.edu 3 1. To make the first dilution, place 1 part serum in a vessel and bring the total volume up to 10 parts total. This is a 1 to 10 dilution of serum in buffer. The "parts" can mean any multiple or fraction of any unit of measurement.

The 1H spectra of the residual protons and 13C spectra were obtained on a Varian Gemini 200 spectrometer at 295°K. The NMR solvents used to acquirethese 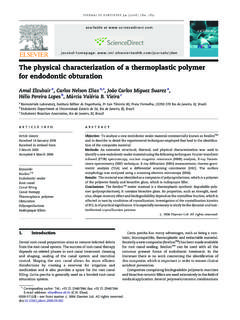 The physical characterization of a thermoplastic … 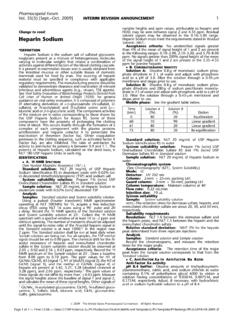 Antithrombin solution: Reconstitute a vial of anti- thrombin (see Reagents, Indicators, and Solutions—Reagent Specifications) as directed by the manufacturer, and further ... 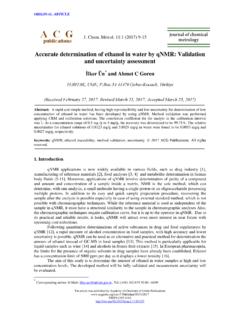 Accurate determination of ethanol in water by …