Normal range values for thromboelastography in …

2 It has characteristics of an ideal coagulation test for trauma, but is not frequently used, partially due to lack of both standardized techniques and Normal values . We determined Normal values for our population, compared them to those of the manufacturer and evaluated the effect of gender, age, blood type, and ethnicity. The technique was standardized using citrated blood, kaolin and was performed on a Haemoscope 5000. device. Volunteers were interviewed and excluded if pregnant, on anticoagulants or having a bleeding disorder. The TEG . parameters analyzed were R, K, , MA, LY30, and coagulation index. All volunteers outside the manufacturer's Normal range underwent extensive coagulation investigations. Reference ranges for 95% for 118 healthy volunteers were R: min, K: min, : degrees, MA: mm, LY30: , coagulation index: Most values were significantly different from those of the manufacturer, which would have diagnosed coagulopathy in 10 volunteers, for whom additional investigation revealed no disease (81% specificity).

3 Healthy women were significantly more hypercoagulable than men. Aging was not associated with hypercoagulability and East Asian ethnicity was not associated with hypocoagulability. In our population, the manufacturer's Normal values for citrated blood-kaolin had a specificity of 81% and would incorrectly identify of the healthy volunteers as coagulopathic. This study supports the manufacturer's recommendation that each institution should determine its own Normal values before adopting TEG , a procedure which may be impractical. Consideration should be given to a multi-institutional study to establish wide standard values for TEG . Key words: Coagulation; thromboelastography ; Normal values Introduction thromboelastography (TEG ; Haemoscope, USA) is a cardiac surgery and liver transplantation, TEG -based point-of-care global hemostasis system used by anesthetists transfusion guidelines reduce the use of blood and blood largely to monitor perioperative changes in coagulation products transfused by up to 50% and minimize inappropri- in surgical patients (1,2).

4 By measuring the viscoelastic ate blood product use and overall costs (5,13). changes that occur during the hemostatic process, TEG In theory, TEG has many of the properties of an ideal provides a real-time functional evaluation of the coagula- coagulation test. It provides a comprehensive assessment tion cascade, beginning with initial platelet-fibrin interac- of coagulation instead of evaluating only discrete portions. It tion, through platelet aggregation, clot strengthening and can be performed at the bedside as a point-of-care testing, fibrin cross-linkage and eventually clot lysis (3). TEG was provides immediate results, is simple to perform, easy to first described over 50 years ago but has been proven interpret, and can account for the effects of hypothermia clinically useful for only the last 20 (1,4-9).

5 TEG has a and acidemia if carried out soon after sampling, without an- well-established role in cardiopulmonary bypass and liver ticoagulants and at the patient's temperature. Furthermore, surgery (10) and there is growing interest in expanding its it may assist with the decision of which and how much of clinical use outside the operating room, particularly for the a blood product to transfuse, and potentially reduce inap- management of trauma-induced coagulopathy (11,12). In propriate transfusions. Correspondence: Rizoli, Sunnybrook Health Sciences Centre, 2075 Bayview Avenue H1-71, Toronto, Ontario, M4N 3M5, Canada. Fax: +1-416-480-5499. E-mail: Received May 15, 2009. Accepted October 8, 2009. Available online November 3, 2009. Published December 4, 2009. Braz J Med Biol Res 42(12) 2009 Normal TEG values in healthy volunteers 1211.

6 There are several reasons why TEG has not been ad- any recent illness including common cold. opted in mainstream clinical practice (14-16). One reason is Four TEG 5000 Hemostasis Analyzers (Haemoscope its excessive dependence on manual procedures compared Inc., USA) with 8 independent channels were used and to other standard coagulation testing devices, a source of connected to computers with the TEG Analytical Software, criticism by laboratory societies (8,17-23). The remarkable version Maintenance and quality controls were versatility of TEG allows the same instrument to analyze performed daily in strict accordance with manufacturer fresh whole blood, citrated blood, platelet-poor plasma, or recommendations. even platelet-rich plasma, using different initiators such as Briefly, blood samples were collected by venipuncture contact proteins or tissue factor.

7 However, such versatility using 20-gauge needles, into Vacutainer tubes results in TEG being done in many different ways, making (Becton Dickinson, USA) with sodium citrate ( it difficult to establish standards and reference values for M trisodium citrate), and gently inverted six times. In accor- each different technique. dance with manufacturer recommendation, samples were The manufacturer's manual provides Normal reference kept at room temperature for 40 min and gently inverted five values for most but not all different techniques (9,17). For times and 1 mL was transferred to a vial containing buffered some techniques, the values in the accompanying software stabilizers and Kaolin (phospholipids). Kaolin was chosen differ from the owners' manual (24). The manual does not due to unavailability of tissue factor alone, which would contain relevant information such as reproducibility, vari- more closely mimic in vivo coagulation.

8 The sample was ability and the effects of age, gender, and ethnic background mixed by inversion five times, 340 L was transferred to a (24,25). Scrutiny of the supporting evidence in the owner's 37 C pre-warmed disposable cup containing 20 L calcium manual reveals that studies with small numbers of volun- chloride and measurements were made for no less than 40. teers or hospitalized patients were used to establish some min. TEG was performed by two operators (SS and HH). of the Normal values . In addressing the reference Normal Normal values were determined using six parameters: R. values , the manufacturer suggests that each new user test (time to initial fibrin formation), K (time to clot formation), . 20 healthy volunteers and generate his own Normal values (alpha angle, rate of clot formation), MA (maximum amplitude, prior to clinical use (24).)

9 The consequence is that TEG absolute clot strength), LY30 (fibrinolysis at 30 min after MA), currently lacks universal recognition as a reliable routine and coagulation index, linear combination of 4 parameters: laboratory test (10,26). R, K, , and MA (Figure 1) (10,28,29). Nevertheless, TEG has become part of clinical practice The reference Normal value obtained for our healthy in cardiac and liver transplant where Normal standard values population was initially compared to that of the manufac- are less relevant and the patient's own baseline preoperative test result is the standard (10). Such a model, however, is not feasible for many other uses, particularly in trauma. Therefore, in preparation for clinical studies on the role of TEG in trauma, we deemed it necessary to establish Normal range values for our population.

10 Considering the Clinical Laboratory Improvement Amendment (CLIA) requirement of a minimum of 30-40 subjects for special coagulation tests when determining in-house Normal values (27), we decided to exceed this minimum by at least 3-fold. We planned to compare our results to those of the manufacturer and to evaluate the impact of gender, age, blood type, and ethnic background. Material and Methods The study was conducted at the Sunnybrook Health Sci- ences Centre and at Defence Research and Development Canada. The Research Ethics Board of both institutions approved the study. Informed written consent was obtained from all participants that consisted of employees, residents and medical students from both institutions. A focused medi- Figure 1. thromboelastography tracings. A, Normal TEG ; B, ex- cal history was taken from each volunteer, with emphasis on amples of hyper- and hypocoagulable tracings. 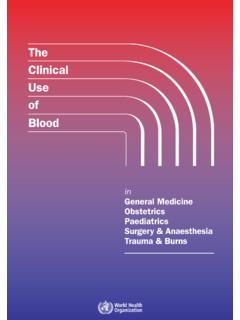 The Clinical of - WHO

Acknowledgements Introduction 1 PArt 1: PrIncIPles, Products And Procedures 1 the appropriate use of blood and blood products 7 1.1 Appropriate and inappropriate transfusion 9

Blood, Clinical, Transfusion, The clinical of