State of Ohio Nutrient Mass Balance Study 1 Executive Summary Since 2011, more than $3.6 billion has been allocated statewide to address both point source and nonpoint source nutrient

3 The strategy was submitted to EPA Region 5 in 2013. Ohio EPA recently updated the strategy to address gaps identified through EPA's review. The strategy and more information about the effort are available at 2. Water Quality Bill: Senate Bill 1 became effective July 3, 2015, requires major publicly owned treatment works (POTWs) to conduct technical and financial capability studies to achieve mg/L total phosphorus; establishes regulations for fertilizer or manure application for persons in the western basin 1; designates the director of Ohio EPA as coordinator of harmful algae management and response and requires the director to implement actions that protect against cyanobacteria in the western basin and public water supplies; prohibits the director of Ohio EPA from issuing permits for sludge management that allow placement of sewage sludge on frozen ground; and prohibits the deposit of dredged material in Lake Erie on or after July 1, 2020, with some exceptions.

4 3. Agriculture Water Quality Bill: SB 150, effective August 21, 2014, requires that beginning September 31, 2017, fertilizer applicators must be certified and educated on the handling and application of fertilizer and authorizes a person who owns or operates agricultural land to develop a voluntary Nutrient management plan or request that one be developed for him or her. 4. State Budget Bill: HB 64, effective June 30, 2015, requires the development of a biennial report on mass loading of nutrients delivered to Lake Erie and the Ohio River from Ohio's point and nonpoint sources. A summary of the bill is available at This report fulfills this requirement for 2016. 5. Great Lakes Restoration Initiative Demonstration and Nutrient Reduction Projects: Nine grants totaling over $12. million were awarded to Ohio. Highlights include: first saturated buffer installed in Ohio; 53 controlled drainage structures installed; 52 whole farm conservation plans developed; 7,500 acres of cover crops planted; and 29.

6 1. State of Ohio Nutrient mass Balance Study 7. Healthy Lake Erie Fund: In 2014 the Ohio General Assembly, provided $10 million to the Healthy Lake Erie Fund to reduce the open lake placement of dredge material into Lake Erie. These sediments often contain high levels of nutrients or other contaminants so finding alternative use or disposal options is a priority. 8. Western Basin of Lake Erie Collaborative Plan: This agreement between Ohio, Michigan and Ontario will serve as a precursor to the Great Lakes Water Quality Agreement Domestic Action Plan. The Collaborative establishes an implementation plan with the goal to achieve a 40% reduction for total and dissolved reactive phosphorus from entering Lake Erie by 2025. 9. Targeted Funding to Ohio Drinking Water and WWTPs: More than $150 million was made available starting in 2014 to help public water systems keep drinking water safe and to help wastewater treatment plants reduce the amount of phosphorus they discharge into the Lake Erie watershed.

7 As of June 2016, more than $61 million had been awarded for this work and most of the remainder has been allocated for specific projects. 10. Directors' Agricultural Nutrients and Water Quality Working Group: A collaborative working group consisting of experts from Ohio EPA, ODA and ODNR developed the group's 2012 report, which contains a number of recommendations to be implemented during the next several years. For example, the report recommends ways for farmers to better manage fertilizers and animal manure and also provides the state with the means to assist farmers in the development of Nutrient management plans and to exert more regulatory authority over the farmers who are not following the rules. The report is available at 11. Ohio Lake Erie Phosphorus Task Force 2: The Task Force, which includes participants from Ohio EPA, ODA and ODNR, came together in 2012 to build on its previous work and make recommendations for improving water quality in the Lake Erie watershed.

8 The task force finalized a report in 2014 recommending a 40% reduction for total and dissolved reactive phosphorus. The report is available at 12. Ohio Point Source and Urban Runoff Workgroup: Businesses, municipalities and Ohio EPA came together to initiate the Point Source and Urban Runoff Workgroup in 2012 to identify actions that can be taken immediately to reduce phosphorus loadings from WWTPs, industrial discharges and urban storm water. The group's full report is available at Background and Purpose Excess nutrients (nitrogen and phosphorus) stimulate algal growth affecting water quality in both the near and far field. This Study computes annual total nitrogen (N) and phosphorus (P) loads originating from Ohio watersheds draining to Lake Erie and the Ohio River. The watersheds covered in this Study include the Maumee, Portage, Sandusky, Cuyahoga, Great Miami, Scioto and Muskingum watersheds.

9 Loads were allocated to major contributor groups, for example, municipal wastewater, combined sewer overflows (CSO), home sewage treatment systems (HSTS) and nonpoint sources. The Study was prompted by the need to identify the most environmentally beneficial and cost-effective mechanisms for Nutrient reduction. The Nutrient mass Balance will serve as a baseline and will aid in tracking progress to goals established by the 2012 Great Lakes Water Quality Agreement and the Gulf of Mexico Hypoxia Task Force 2008 Action Plan. Finally, Ohio EPA is required by Ohio law [ORC ] to complete this Nutrient accounting on a two-year basis. Methods/Approach The current (2016) edition computes loading totals on a water-year (WY) basis for each of water years 2013 and 2014. Data from water years 2013 -14 are the most recent and complete data sets available and is the reason they are used in this initial baseline report.

10 Watersheds selected for analysis were limited to those with daily water quality monitoring needed for an accurate estimate of annual load. These watersheds include the Maumee, Portage, Sandusky and Cuyahoga of the 2. State of Ohio Nutrient mass Balance Study Lake Erie system and the Great Miami, Scioto and Muskingum of the Ohio system seven in total and comprising 63. percent of Ohio's land area. Total load at a pour point' was computed from water chemistry and flow by the National Center for Water Quality Research and the Geological Survey, respectively. A pour point is a location on a river or stream where the total load is known. Loads from sources permitted by the National Pollutant Discharge Elimination System (NDPES) were estimated using self-monitoring data for wastewater and combined sewer overflows, referred to as NPDES loads. 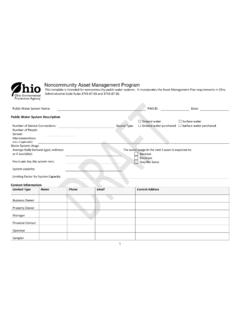 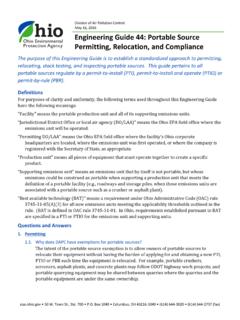 Engineering Guide 44: Portable Source Permitting, Relocation, and Compliance Page|3 specifically with the portable source, the permittee must first apply for and obtain a permit 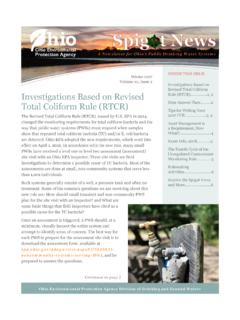 Investigations Based on Revised Total Coliform … 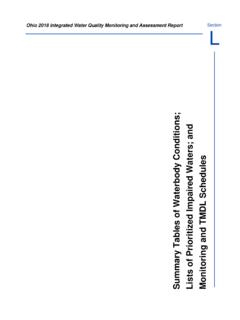 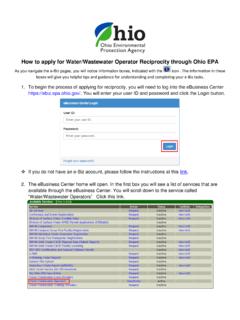 How to apply for Water/Wastewater Operator …

How to apply for Water/Wastewater Operator Reciprocity through Ohio EPA As you navigate the e-Biz pages, you will notice Information boxes, indicated with the icon . The information in these 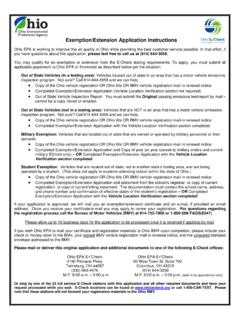 Exemption/Extension Application The top portion of the form must be filled out by the owner or operator of the vehicle. The Vehicle Verification section of 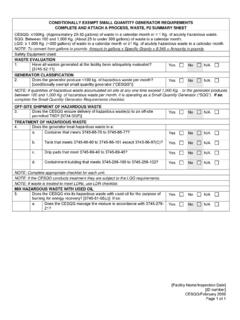 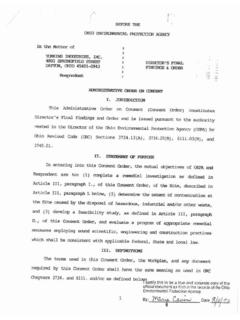 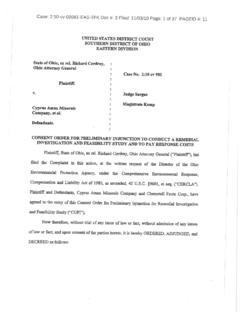 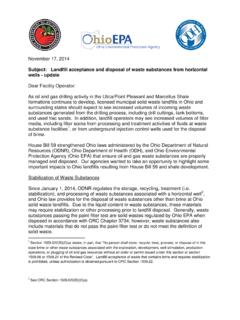 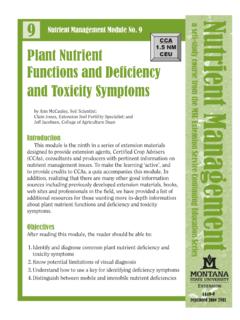 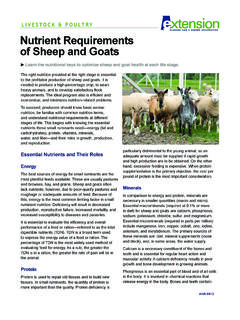 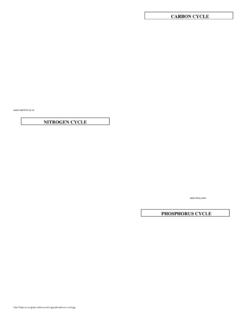 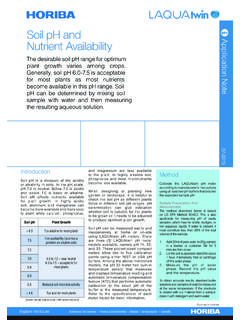 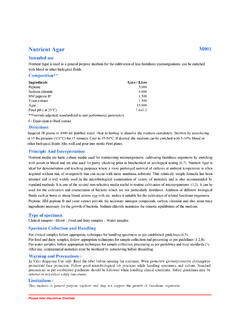 Please refer disclaimer Overleaf. Nutrient Agar M001 Intended use Nutrient Agar is used as a general purpose medium for the cultivation of … 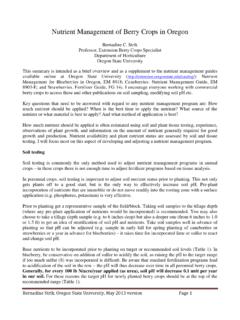