2 The Basket lost $ to stand at $ Crude oil futures also fell, with ICE Brent averaging $ and Nymex WTI. $ The Brent-WTI spread widened marginally to $ World Economy World economic growth figures remain unchanged at for the current year and in 2016. With slightly stronger growth in the US and lower-than-expected growth in Japan in 3Q15, the OECD growth forecast remains at for 2015 and for 2016. The 2016 growth forecast for China remains unchanged at , following estimated growth of this year. India is expected to grow by in 2016, unchanged from the previous report, while the growth estimate for the current year has been revised down to World Oil Demand World oil demand is anticipated to increase by mb/d this year, averaging around mb/d. These projections are 30 tb/d higher than last month's estimate, mainly as a result of better-than-expected consumption in OECD Europe and Other Asia.

3 For 2016, global oil demand growth is expected to increase by around mb/d, unchanged from the previous report, averaging mb/d. World Oil Supply Non-OPEC oil supply is estimated to grow by mb/d in 2015 to average mb/d. This represents an upward revision of mb/d from the previous report, driven mainly by actual production data from the US, UK, Brazil, Russia and China. For 2016, non-OPEC oil supply is now expected to contract by mb/d to average mb/d, following a downward revision of mb/d. OPEC NGLs are expected to grow by mb/d in 2016, compared to an increase of mb/d this year. In November, OPEC production according to secondary sources rose by 230 tb/d from the previous month to average mb/d. Product Markets and Refining Operations Product markets in the Atlantic Basin strengthened during November on the back of positive performance of the top of the barrel.

4 Gasoline and naphtha were supported by strong regional demand amid export opportunities, which improved margins and offset the lack of winter support. Meanwhile, Asian margins remained healthy on the back of higher seasonal demand in the region and a stronger petrochemical sector. Tanker Market Lower tonnage demand drove down average VLCC spot freights rates in November, while both Suezmax and Aframax freight rates increased, mainly on the back of delays in several ports. West of Suez activities provided some support to clean spot freight rates, while East of Suez rates slightly dropped. OPEC sailings increased in November by mb/d to average mb/d. Tanker arrivals in most regions were lower in November, except arrivals at North American ports. Stock Movements OECD commercial oil stocks fell in October to stand at 2,955 mb, but inventories were around 244 mb higher than the five-year average, with crude and products indicating a surplus of around 180 mb and 64 mb, respectively.

5 In terms of days of forward cover, OECD commercial stocks stood at days in October, days higher than the five-year average. Balance of Supply and Demand Demand for OPEC crude in 2015 is estimated to stand at mb/d, an increase of mb/d over last year and representing a downward revision of mb/d compared to the previous report. In 2016, demand for OPEC crude is forecast at mb/d, an increase of mb/d over the current year and unchanged from the previous assessment. OPEC Monthly Oil Market Report December 2015 1. 2 OPEC Monthly Oil Market Report December 2015. Review of 2015, outlook for 2016. The global economy continued its moderate growth in 2015 and is now expected to expand at Some important economic developments marked this year's growth. The OECD managed to accelerate its growth level again slightly. In the emerging economies, India saw stronger-than-expected growth and China's momentum moderated, while Russia and Brazil experienced contractions.

6 Lower oil prices provided support for consumers in the US, Euro-zone, China and India, but the shortfall in investments and the lower income from the oil sector in major oil producer countries has offset some of these positive effects (Graph 1). Monetary decisions have continued to play a key role in the global economy, not just in the OECD. economies but also in China and India. An expected interest rate hike by the US Federal Reserve has affected capital flows and currencies, but the full impact will only be seen once the decision is taken. In the meantime, the increase in monetary stimulus in the Euro-zone and Japan has not been as effective in supporting these economies as planned. In contrast, China's stimulus plans have achieved some success in supporting the country's economy. The development of monetary policies will remain an influential factor in the coming year, including for the oil market.

8 The upward revision has been supported by lower oil prices in the main demand centers, particularly OECD Americas and Europe. Motor fuel consumption in the US and Europe was encouraged by cheaper product prices, along with improving car sales data. Petrochemical consumption also contributed to the higher growth. In the non-OECD, oil demand growth came mainly from China, India and the Middle East. In contrast, Brazilian oil requirements slipped back into a contraction as economic momentum slowed. In 2016, world oil demand is expected to grow by mb/d, partly supported by the improvement in global economic activities. The OECD region is anticipated to rise by 150 tb/d, led solely by the US, while Europe and Asia Pacific are seen declining. In the non-OECD region, growth is expected to be around mb/d, with China showing slightly lower growth. Steady oil requirements are expected in Other Asia, the Middle East and Latin America.

9 Nevertheless, the oil demand forecast for 2016 is subject to considerable uncertainties, depending on the pace of economic growth, development of oil prices, and weather conditions, as well as the impact of substitution and energy policy changes. Non-OPEC supply growth in 2015 has been revised down by 310 tb/d since the initial forecast to now stand at mb/d. This has been mainly due to the impact of low oil prices and declining investments in the oil industry. The adjustment is also attributable to downward revisions in both the OECD and Developing Countries of 420 tb/d and 40 tb/d, respectively. Higher-than-expected growth in the UK, Malaysia, Russia, China and Colombia has been more than offset by lower-than-expected growth in Canada due to the wildfire in Alberta in 2Q15, the unexpectedly sharp decline in Mexico, and higher declines in Australia and from Caspian producers.

10 US oil output increased by a lower-than-anticipated 810 tb/d. In 2016, non-OPEC oil supply is forecast to decline by 380 tb/d. Growth is seen coming mainly from Canada and Brazil, with declines also expected in the US, Mexico, Russia, Kazakhstan, the UK and Azerbaijan. OPEC NGLs are seen increasing by 170 tb/d in 2016, following growth of 160 tb/d in 2015. As a result of the current forecasts, the demand for OPEC crude in 2016 is expected at mb/d, which represents an increase of mb/d over the estimated level for 2015. OPEC Monthly Oil Market Report December 2015 3. 4 OPEC Monthly Oil Market Report December 2015. Crude Oil Price Movements Crude Oil Price Movements The OPEC Reference Basket (ORB) declined by almost 10% in November to its lowest level in almost seven years. The ORB departed from three-month long levels of $45/b, as lower refinery crude intake amid planned and unplanned outages in October and November added to the persistent oversupply in the market. 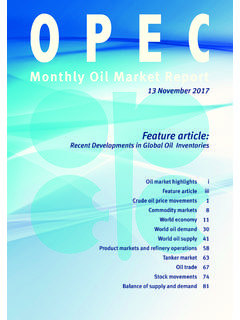 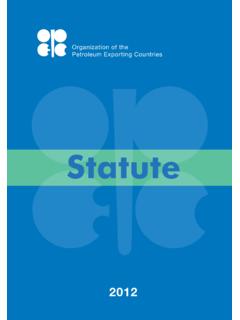 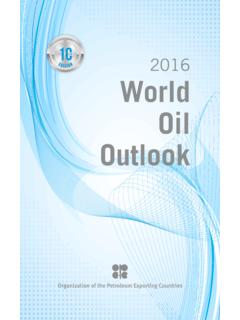 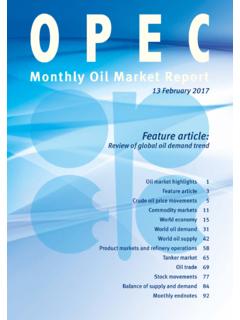 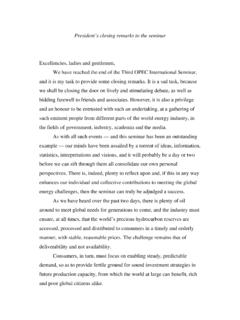 President’s closing remarks to the seminar Excellencies, ladies and gentlemen, We have reached the end of the Third OPEC International Seminar, 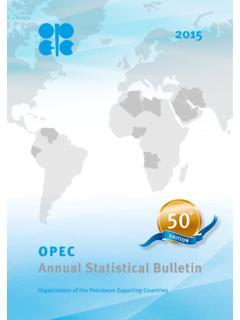 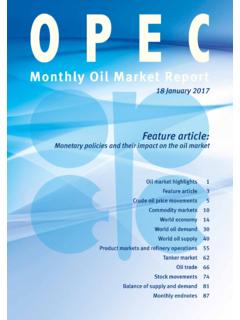 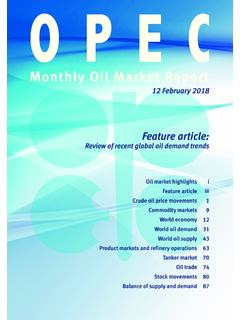 Review of recent global oil demand trends World oil demand growth exceeded 1.40 mb/d for the third consecutive year to register an increase of 1.6 mb/d in 2017. Total global demand is now near the 97.0 mb/d threshold. Cumulatively, between 2015 and 2017, the 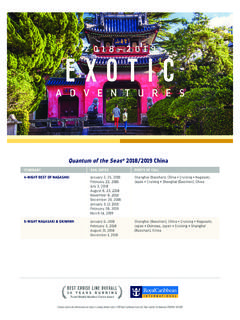 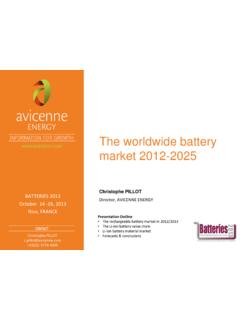 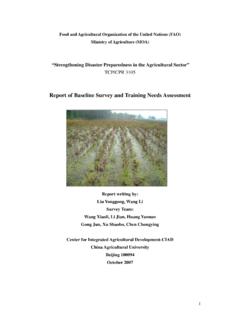