2 ABSTRACT. Isocyanates are of toxicological relevance since they are considered to cause occupational asthma. The majority of polyurethanes is based on AROMATIC diisocyanates ( , TDI and MDI), they are used for foams, elastomers, adhesives and coatings. Therefore we studied reactions of p-tolylisocyanate (pTI), 2,4-toluene diisocyanate (TDI) and 4,4'- methylenediphenyl diisocyanate (MDI) with N-acetyl-L-cysteine (AcCys) with different molar ratios in aqueous buffer solutions of pH Type and amounts of products formed in these reactions were identified and quantified. Conjugates of AcCys and the AROMATIC isocyanates have been synthesized and characterized as reference materials.

3 Conjugates and ureas were found to be the main products. The ratio of these two compounds varied with the ratio of AcCys to isocyanate. Approximately 90 % of pTI conjugate were found for the 10 : 1 ratio, approximately 40 % conjugate for the 10 : 5 and around 15 % for the 10 : 15 ratio. For TDI yields of conjugate were comparable. Ureas, apart from minor amounts of TDA-urea could not be determined quantitatively due to formation of oligomeric ureas with different end groups. Minor amounts of MDI-conjugates were found apart from high amounts of insoluble material, which proved to be unreacted MDI encapsulated by oligomeric ureas.

4 The reaction of the SH group with the isocyanate moiety is independent of the pH of the solution in the range studied. No diamine, 2,4-TDA or 4,4'-MDA, could be detected in reactions of the diisocyanates 2,4-TDI or 4,4'-MDI. Small amounts of p-toluidine (pTA) were found in the reaction of the mono isocyanate pTI when it was in excess with respect to AcCys. Reactions of the isocyanates with an aqueous buffer solution of pH in the absence of AcCys gave ureas as main products, while significant amounts of unreacted diisocyanates remained encapsulated in the mixture. No 2,4-TDA or 4,4'-MDA was detected under these conditions.

6 As most of these functional groups are isocyanates with water and the functional 191. group of the biomolecules can be assumed interfacial area and weight (volume) of (Brown et al., 1987; International Isocyanate isocyanates depends on the size of particles Institute, 1999; Mr z and Bouskov , 1999; (droplets) being in contact with body fluids. Schuetze et al., 1995; Zhong et al., 2001). Simplified reactions mimicking Products formed may be ureas, polyureas, physiological conditions are necessary to amines and/or conjugates ( bioureas , understand the whole scope of isocyanate- biothiocarba-mates ).

7 Most of the work tissue interaction. published to date has been devoted to 2,4- TDI or 4,4'-MDI. Practically no experimental data are available on the type Although it is generally accepted that the and amount of reaction products formed simple hydrolysis products of MDI and TDI, under physiological conditions. MDA and TDA, are not major metabolites, the question whether and to what extend they are formed still needs to be answered Reactions of AROMATIC mono- and (Reisser et al., 2002; Deutsche diisocyanates in aqueous solutions of glycine Forschungsgemeinschaft, 1992; Deutsche (Gly) under simulated physiological pH Forschungsgemeinschaft, 1999; Bundesan- conditions have been studied by Seel (Seel stalt fuer Arbeitsschutz und Arbeits-medizin, and Kuck, 2001).)

8 During in vitro reactions of 2000). Especially for TDI it was recognized 4,4'-MDI or 2,4-TDI in aqueous, buffered that the question of the TDA formation by solutions of glycine they found that Gly2 MDI hydrolysis of TDI needs to be answered to or Gly2 TDI as well as the ureas (mainly allow for a quantitative assessment of cancer polyureas) of MDI and TDI were the main risk after inhalation of TDI at the workplace products formed. No detectable amounts of (Deutsche Forschungsgemeinschaft, 1999). 4,4'-methylene dianiline (MDA) or 2,4- diaminotoluene (TDA) were generated. However, reaction of monofunctional In the present work N-acetyl-L-cysteine phenylisocyanate (PhI) with glycine under (AcCys), the simplest model compound of a these conditions led to the generation of thiofunctional biomolecule, was chosen to minor amounts of amine, in this case aniline, study the INTERACTIONS of sulfhydryl groups besides the main products GlyPhI and containing peptides with AROMATIC diphenylurea.

9 Isocyanates. Competing reactions of the isocyanate with thiol and with the aqueous medium are expected to occur. Glutathione (GSH) S-conjugation appears to be one of the most salient mechanisms involved in isocyanate metabolism (Zhong et The objective of this investigation was to al., 2001; Day et al., 1997;Pauluhn et al., identify and quantify the chemical products 2006; Reisser et al., 2002). Inhalation is a formed when TDI and MDI react under predominant route of exposure (Sabbioni et heterogeneous conditions with aqueous al., 1997). Several attempts have been made solutions of AcCys.

10 The reaction conditions to investigate the chemistry of these rather chosen were those that could be encountered complex systems; so far they do not provide when isocyanates come into contact with detailed quantitative information on the biological fluids, during skin contact or individual compounds formed. inhalation, which corresponds to pH values between and Investigation of reactions of MDI and TDI in aqueous solutions is challenging as both di- Monofunctional pTI was included in this isocyanates easily react with water while study as a model substance. Its advantage, in being poorly soluble. 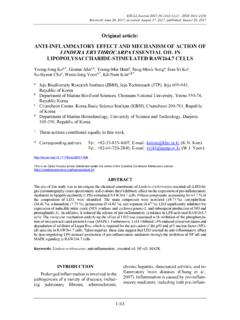 Review article: THE IMPACT OF STRESS ON BODY ... - EXCLI 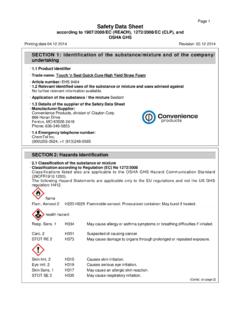 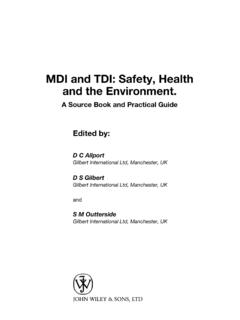 MDI and TDI: Safety, Health and the Environment. 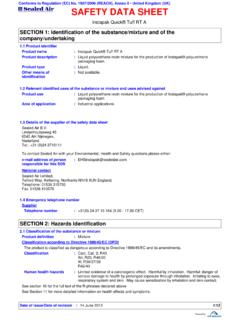