Prospectus SEB fund 2. with its current Sub-Funds SEB Asia ex. Japan fund SEB Generation fund 80. SEB Nordic Focus fund SEB Russia fund _____. Undertaking for Collective Investment in Transferable Securities under the Luxembourg law of 17 December 2010 on Undertakings for Collective Investment Luxembourg K50. November 2017. 1. Important Information It is not permitted to supply information or explanation that differs from the Prospectus or the Management Regulations. SEB Investment Management AB is not liable if and to the extent that such divergent information or explanations are supplied.

1 Prospectus SEB fund 2. with its current Sub-Funds SEB Asia ex. Japan fund SEB Generation fund 80. SEB Nordic Focus fund SEB Russia fund _____. Undertaking for Collective Investment in Transferable Securities under the Luxembourg law of 17 December 2010 on Undertakings for Collective Investment Luxembourg K50. November 2017. 1. Important Information It is not permitted to supply information or explanation that differs from the Prospectus or the Management Regulations. SEB Investment Management AB is not liable if and to the extent that such divergent information or explanations are supplied.

2 Statements made in this Prospectus are based on the law and practice currently in force in the Grand Duchy of Luxembourg and are subject to changes in those laws or practice. This Prospectus is only valid, when used in connection with the applicable KIID, the Management Regulations and the audited annual report of the fund , the report date of which must not be older than 16. months. This report should be accompanied by the un-audited semi-annual report of the fund , if the annual report date is older than eight months. The distribution of the Prospectus and the offering of the Sub-Funds and their Unit Classes may be restricted in certain jurisdictions.

3 It is the responsibility of any persons in possession of this Prospectus and any persons wishing to subscribe to Units pursuant to this Prospectus to inform themselves of, and to observe all applicable laws and regulations of any relevant jurisdictions. Prospective investors should inform themselves as to the legal requirements and consequences of applying for, holding, converting and disposing of Units and any applicable exchange control regulations and taxes in the countries of their respective citizenship, residence or domicile. This Prospectus does not constitute an offer or solicitation to subscribe to the Units by anyone in any country in which such offer or solicitation is unlawful or unauthorized, or to any person to whom it is unlawful to make such offer or solicitation.

4 The distribution of this Prospectus in certain countries may require it to be translated into languages specified by the regulatory authorities of those countries. Should any inconsistency arise between the translated and the English versions of this Prospectus , the English version shall always prevail. 2. Glossary of terms The following summary is qualified in its entirety by reference to the more detailed information included elsewhere in this Prospectus . Base Currency the currency of denomination of the different Sub-Funds as defined under each Sub- fund in part II of the Sub- Branch SEB Investment Management AB, Luxembourg Branch Central Administration The Bank of New York Mellon SA/NV Luxembourg Branch.

5 Class / Unit Class the Management Company may decide to issue, within each Sub- fund , separate classes of Units whose assets will be commonly invested but where a specific entry or exit charge structure, minimum investment amount, distribution policy or any other feature may be applied Collateral Policy The collateral policy for OTC derivatives & efficient portfolio management techniques for SEB Investment Management AB. Consolidation Currency the consolidation currency of the fund being the dollar Commitment method The commitment method calculates all derivative exposure as if they were direct investments in the underlying positions after consideration of netting or hedging.

7 Previously the Committee of European Securities Regulators FATCA US Foreign Account Tax Compliance Act FATF Financial Action Task Force Feeder UCITS A sub- fund qualifying as a UCITS feeder sub- fund as defined in chapter 9 of the Law Finansinspektionen The Swedish Financial Supervisory Authority fund SEB fund 2 is organised under the Law as a common fund (FCP. fonds commun de placement). It comprises several Sub-Funds. the Prospectus as meaning the whole umbrella SEB fund 2 or 3. any of its Sub-Funds, as the case may be. Institutional Investor An undertaking or organisation, within the meaning of Article 174 of the Law such as credit institutions, professionals of the financial sector including investment in their own name but on behalf of third parties who are also investors within the meaning of this definition or pursuant to a discretionary management agreement - insurance and reinsurance companies, pension funds, Luxembourg and foreign investment schemes and qualified holding companies.

8 Regional and local authorities KIID key investor information document of a Unit Class Law the Luxembourg law of 17 December 2010 on undertakings for collective investment, as amended from time to time Management Company SEB Investment Management AB, acting directly or through the Branch, as the case may be Management Regulations the management regulations of the fund as amended from time to time Member State a member state/states of the EU. The states that are contracting parties to the Agreement creating the European Economic Area other than the Member States of the EU, within the limits set forth by this Agreement and related acts, are considered as equivalent to Member States of the EU.

9 NAV - Net Asset Value per Unit the value per Unit of any Class determined in accordance with the relevant provisions described in this Prospectus and the Management Regulations OECD Organisation for Economic Co-operation and Development Prospectus the currently applicable Prospectus of the fund , as amended and updated from time to time RCS Luxembourg Trade and Companies Register, Registre de Commerce et des Soci t s Reference Currency the currency of denomination of the relevant Class in the Sub-Funds SEB Group Skandinaviska Enskilda Banken AB (publ) and all its subsidiaries Sub- fund a separate portfolio of assets which is invested in accordance with a specific investment objective The Sub-Funds are distinguished mainly by their specific investment policy, their Base Currency and/or any other specific feature.

10 The particulars of each Sub- fund are described in part II of the Prospectus - . The board of directors of the Management Company may, at any time, decide on the creation of further Sub-Funds and in such case, the part II of the Prospectus will be updated. Each Sub- fund may have one or more Classes. UCI Undertaking for Collective Investment UCITS Undertaking for Collective Investment in Transferable 4. Securities Unitholder the holder of Units in any Sub- fund Units units of any Sub- fund Valuation Day the day on which the NAV per Unit is calculated This day is defined as any bank business day in Luxembourg unless stated in the relevant Sub- fund . 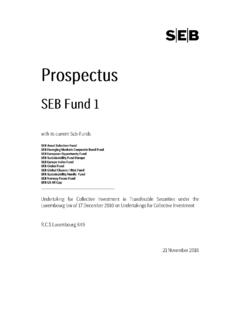 with its current Sub-Funds - SEB Sverige 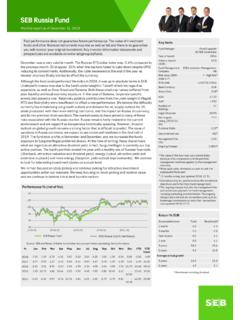 Monthly report as of December 31, 2018 SEB Russia Fund Past performance does not guarantee future performance. The value of investment funds and other financial instruments may rise as well as fall and there is no guarantee 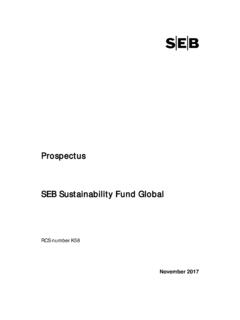 - 7 - I. The Fund 1. General Information SEB Sustainability Fund Global (hereinafter the “Fund”) is an open-ended common fund (“FCP” – “Fonds commun de placement”) registered under Part I of the Law. 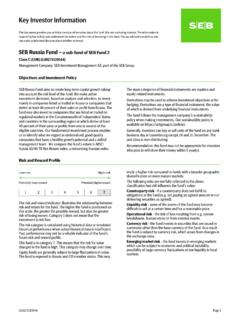 LU0273119544 Page 1 can make Key Investor Information This document provides you with key investor information about this fund. It is not marketing material. 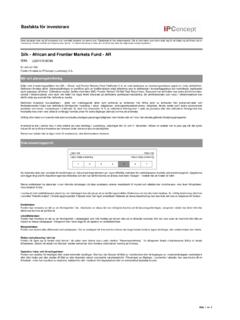 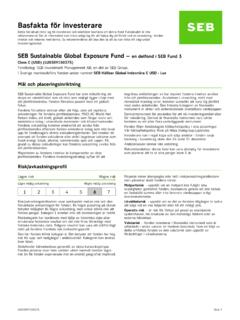 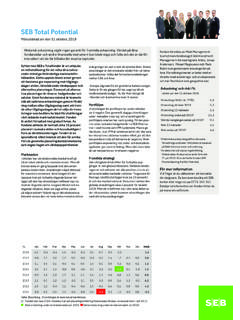 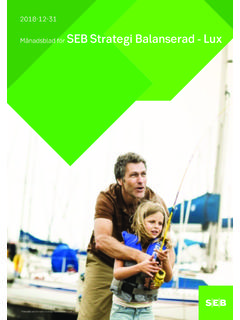 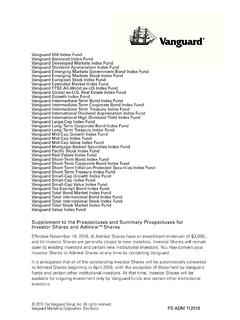 Global Management of Regulated Funds – A … 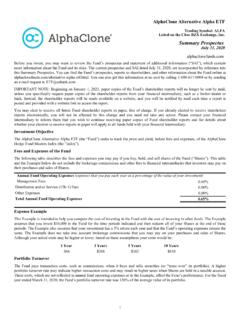 Before you invest, you may want to review the AlphaClone Alternative Alpha ETF’s (the “Fund”) statutory prospectus and statement of additional information, which contain more information about the Fund and its risks.