Page 4 3. Stakeholders The following parties are considered as “stakeholders” in terms of the Act and must be included in the surplus apportionment scheme as at 1 April 2008:

2 Summary of the Apportionment as at 1 April 2008 Page 11 13. Statements by the Former Member Representative Page 11 14. Application of Surplus allocation amounts Page 12 15. In summary Page 13 16. Next steps required from Stakeholders Page 13 Annexure 1 Deaths on or after 1 April 2008 Page 14 Page 3 Engineering Industries Pension Fund ( the EIPF ) (12/8/5040) Surplus Apportionment scheme as at 1 April 2008 Report by the Trustees 1. Introduction The Pension Funds Second Amendment Act, 2001 (the Act) requires all pension funds to allocate any Surplus on a basis as set out in the Act.

3 The Surplus Apportionment date for the Engineering Industries Pension Fund (also referred to as the EIPF ) is 1 April 2008. The purpose of this document is to inform all stakeholders on the Surplus Apportionment scheme, as approved by the Trustees. 2. History of the EIPF A fund known as the Metal Industries Group Life and Provident Fund (also referred to as the MIGLPF ) was established effective 29 July 1957. During 1975 the fund converted to a defined benefit structure. On 31 March 1990 the MIGLPF changed its name to the Engineering Industries Pension Fund (EIPF). On 1 May 1991 the Metal Industries Provident Fund (MIPF) was established as a defined contribution provident fund.

5 In terms of the law, former members of the MIGPF who exited before 1 January 1995 (the date when the MIGPF merged into the EIPF) are not regarded as stakeholders in the Surplus Apportionment scheme for the EIPF as they never contributed and belonged to the EIPF. Page 4 3. Stakeholders The following parties are considered as stakeholders in terms of the Act and must be included in the Surplus Apportionment scheme as at 1 April 2008: Former members of the EIPF [a total of 202 810 qualifying former members] These are all members who left the EIPF (previously known as the MIGLPF) over the period 1 January 1980 (the date specified in the Act) until 31 March 2008 and who previously received a benefit from the EIPF, that is, all withdrawals, transfers and retirements during this period.

7 Some of these members will only become entitled to their accumulated fund benefits at a future date (once they reached retirement age). Others have already become entitled to benefits, but have not claimed the benefits as such. In the actuarial valuations the value of the paid-up members benefits are reserved for as part of the liabilities of the EIPF. The various participating Employers The following parties are legally not regarded as stakeholders of the EIPF and have been excluded from the Surplus Apportionment scheme. All former members who died before or on 31 March 2008. All former members who exited before 1 January 1980 (date specified in the Act) and received their benefits in terms of the Rules of the EIPF.

8 All pensioners who died before or on 31 March 2008. All members who entered the EIPF on or after 1 April 2008. The Trustees have appointed Mr David Levy as Former Member Representative to represent the interests of former members in the discussions regarding the Surplus Apportionment scheme. 4. Actions by the Board of Trustees to obtain all the former member data Page 5 MIBFA , the Administrator of the EIPF, provided the membership data as recorded on their systems. The Trustees also placed advertisements in various newspapers, both on a national and regional level, to invite former members to come forward and register as a stakeholder in the Surplus Apportionment scheme.

10 The valuation indicated a total Surplus of R 24 479 million, prior to the investigation of any improper use of Surplus by the employers (refer to Section 6 of this Booklet ) and prior to the establishment of any contingency reserves (refer to Section 7 of this Booklet ). 6. Surplus deemed improperly utilised by the employer Section 15B(6) of the Act stipulated four instances of utilisation of Surplus which are deemed as being improperly utilised and requires all pension funds to investigate such usages of Surplus . An investigation into the financial history of the EIPF over the period 1 January 1980 (date specified in the Act) up to the Surplus Apportionment date of 1 April 2008 was done with the aim of determining whether any Surplus was utilized improperly by the employers, as defined in Section 15B(6) of the Act. 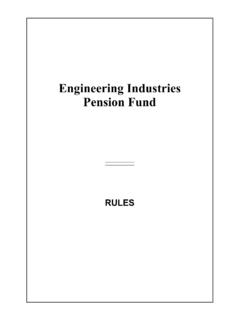 APPLICATIONS FOR BENEFITS Applications for benefits are to be addressed to: The Manager Engineering Industries Pension Fund P O Box 7507 Johannesburg

Association Incorporated Under Section 21: Reg. No …

APPLICATION FOR PAYMENT OF BENEFITS ON …

CERTIFICATE OF SERVICE (State name and address of employer.To be imprinted with Firm's rubber stamp.) Company Ref No: ………………………………… This is to certify that the particulars as mentioned hereunder are a … 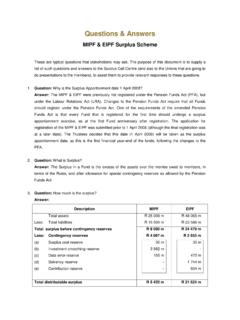 Questions & Answers MIPF & EIPF Surplus Scheme These are typical questions that stakeholders may ask. The purpose of this document is to supply a 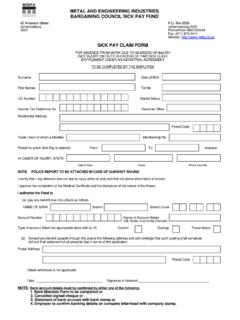 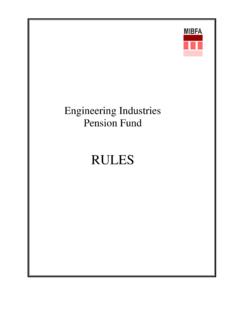 (a) the rights of such persons under Rule 6(I) shall remain entrenched; (b) a MEMBER who becomes entitled to a benefit in terms of the Rules of the PERMANENT DISABILITY 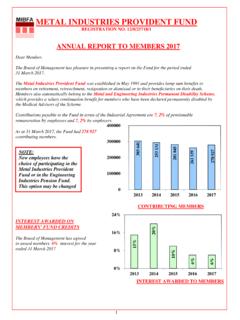 1 METAL INDUSTRIES PROVIDENT FUND REGISTRATION NO. 12/8/25718/1 ANNUAL REPORT TO MEMBERS 2017 Dear Member, The Board of Management has pleasure in presenting a report on the Fund for the period ended 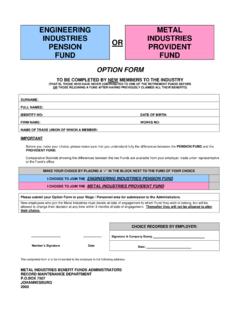 engineering industries pension fund or metal industries provident fund option form to be completed by new members to the industry (that is, those who have never contributed to one of the retirement funds before 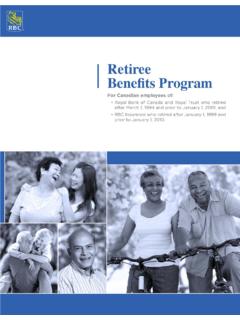 Retiree Benefits Program - Post-March 1994 Retirees December 2012 Page 1 . This booklet is intended to provide a reasonable and easy-to-understand summary of …

Summary of Benefits January 1st, 2018 - December 31st, 2018 The benefit information provided is a summary of what we cover and what you pay. It doesn’t list