The impact of natural hazards and disasters on …

THE impact . OF natural hazards . AND disasters . ON AGRICULTURE. AND FOOD SECURITY AND NUTRITION. A CALL FOR ACTION. TO BUILD RESILIENT LIVELIHOODS. Updated May 2015. 1. Key findings This brochure presents the preliminary findings of a study of the Food and Agriculture Organization of the United Nations (FAO) on the impact of natural hazards and disasters on the agriculture sector and subsectors1 in developing countries. The core findings of the study are: The agriculture sector including crops, livestock, fisheries and forestry absorbs approximately 22 percent of the economic impact caused by medium- and large- scale natural hazards and disasters in developing countries.

1 THE impact . OF natural hazards . AND disasters . ON AGRICULTURE. AND FOOD SECURITY AND NUTRITION. A CALL FOR ACTION. TO BUILD RESILIENT LIVELIHOODS. Updated May 2015. 1. Key findings This brochure presents the preliminary findings of a study of the Food and Agriculture Organization of the United Nations (FAO) on the impact of natural hazards and disasters on the agriculture sector and subsectors1 in developing countries. The core findings of the study are: The agriculture sector including crops, livestock, fisheries and forestry absorbs approximately 22 percent of the economic impact caused by medium- and large- scale natural hazards and disasters in developing countries.

2 The high impact of natural hazards and disasters on agriculture calls for enhanced mainstreaming of disaster risk reduction and resilience building within the agricultural sectors;. There are major data gaps on the impact of natural hazards and disasters on the agriculture sectors in developing countries. This sector-specific data must be systematically collected and included in national and international disaster loss databases to better inform appropriate risk reduction policies and investments for and within the sector;. Humanitarian aid and official development assistance to the agriculture sector is small when compared with the economic impact and needs in the sector.

3 More investment is needed in disaster risk reduction to build resilient livelihoods and food production systems; The agriculture sectors need to be mobilized as proactive implementation partners for the delivery of the post-2015 framework on disaster risk reduction so as to enhance local action and build resilience of the most vulnerable, which are often also the most food insecure. FAO / Asim Hafeez 2. disasters and Agriculture the information gap Between 2003 and 2013, natural hazards and disasters in developing countries affected more than billion people and caused over USD 494 billion in estimated damage2.

4 How much of this damage was on the agriculture sector is unreported and is therefore unknown. Global statistics on the economic impact of disasters are collected and reported as a total sum for all sectors, and do not capture the impact on individual sectors. National and international disaster loss databases typically report populations affected and damage to housing and other infrastructure, but seldom report damage or losses in the agriculture sector. As a result, there is no clear understanding of the extent to which natural hazards and disasters impact the agriculture sector and subsectors in developing countries.

5 Yet, sector-specific quantitative data on disaster losses is necessary to understand the breadth and scope of disaster impact on agriculture and livelihoods. disasters destroy critical agricultural assets and infrastructure, and they cause losses in the production of crops, livestock and fisheries. They can change agricultural trade flows, and cause losses in agricultural-dependent manufacturing subsectors such as the textile and food processing industries. disasters can slow economic growth in countries where the sector is important to the economy and where it makes a significant contribution to national Gross Domestic Product (GDP).

6 Agriculture contributes as much as 30 percent of national GDP in Burkina Faso, Burundi, Cambodia, Central African Republic, Chad, Ethiopia, Kenya, Mali, Mozambique, Nepal and Niger among others. When disasters strike, they have a direct impact on the livelihoods and food security of millions of small farmers, pastoralists, fishers and forest-dependent communities in developing countries. Agriculture employs over 30 percent of the labour force in countries such as Bolivia, Cambodia, Cameroon, Guatemala, India, Indonesia, Nicaragua Niger, Philippines, Sri Lanka, and Viet Nam, and over 60 percent of people in Burkina Faso, Ethiopia, Kenya, Madagascar, Mali, Tanzania, Uganda and Zambia.

7 However, there is a critical information gap in terms of the quantitative economic impact of disasters on agriculture and on the livelihoods and food security of populations affected. FAO has undertaken a study to help fill this information gap, and to quantify where possible the impact of natural hazards on the agriculture sector in developing countries over the past decade. This brochure presents the first preliminary findings of the study. The goal of FAO's study is to contribute to a better understanding of disaster impact on the sector and help inform appropriate sector-specific disaster risk reduction policies and financial investments that build resilience in agriculture and livelihoods.

8 Resilience is understood as the ability to prevent disasters and crises, and to anticipate, absorb, accommodate or recover from them in a timely, efficient and sustainable manner. This includes protecting, restoring and improving food and agricultural systems under threats that impact food security, nutrition, agriculture and/or food safety/public health. Ultimately, the adoption of agricultural technologies that help prevent, mitigate or reduce the underlying risks needs to be informed by a clear understanding of the way in which disasters impact on crop, livestock, fisheries or forestry production, or the type of hazards which have the greatest impact on each subsector.

9 It requires a better understanding of how disasters compromise food security and nutrition, sector growth and national economies. 3. Estimating the impact of disasters on agriculture and livelihoods Given the lack of global statistics on disaster losses in agriculture, FAO applied a combination of methods and used several sources of information to estimate the economic impact on the sector. The study covered natural hazards , namely drought, floods, storms such as cyclones and hurricanes, earthquakes, tsunamis and volcanic eruptions, affecting developing countries between 2003 and 2013, and focused on the following five key areas of analysis: 1.

10 Calculating the trends in damage and losses caused by medium- to large-scale disasters in the sector, based on a review of post- disaster needs assessments that were undertaken during the last decade in developing countries; and estimating the damage caused by natural hazards on crops and livestock based on data from DesInventar;. 2. Estimating losses in crop and livestock production in developing countries affected by medium- to large-scale disasters during the same period;. 3. Estimating changes in trade flows, particularly increases in the value of imports and decreases in the value of exports. 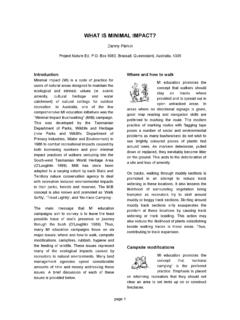 WHAT IS MINIMAL IMPACT? - Project Nature-Ed

What, Impact, Minimal, What is minimal impact 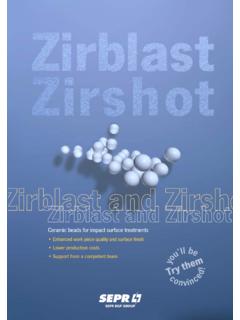 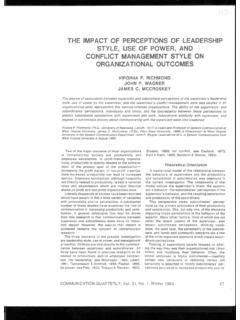 THE IMPACT OF PERCEPTIONS OF LEADERSHIP …

113 the impact of perceptions of leadership style, use of power, and conflict management style on organizational outcomes virginia p. richmond john p .

The economic impact of the remier eague 4 The growth in popularity of English football has been based on the ability of the Premier League and the Clubs to realise the value of the football competition.

THE QUARTERLY JOURNAL OF ECONOMICS

THE QUARTERLY JOURNAL OF ECONOMICS Vol.CXVI May2001 Issue2 THE IMPACT OF LEGALIZED ABORTION ON CRIME* JOHNJ.DONOHUEIIIANDSTEVEND.LEVITT We offer evidence that legalized abortion has contributed signi” cantly to

Production, impact and regulation paper 179 ISSN 0254-6019 FAO ANIMAL PRODUCTION AND HEALTH This document presents a unique and exhaustive review of the state-of-knowledge on the use of probiotics in diverse livestock production

What Is NONIE? NONIE is a Network of Networks for Impact Evaluation comprised of the Organisation for Economic Co-operation and Development’s Development Assistance Committee (OECD/