THE JOINT STATEMENT ON VIOLENCE AND …

THE JOINT STATEMENT ON VIOLENCE AND BEHAVIOR IN THE WORKPLACE The Precipitating Event On November 8, 1991, a discharged Letter Carrier armed with a loaded semiautomatic

2 But griefand sympathy are not enough. Neither are ritualistic expressions of grave concern or the initiation of investigations, studies, or research projects. The United States Postal Service as an institution and ail of us who serve that institution must firmly and unequivocally commit to do everything within our power to prevent further incidents of work-related VIOLENCE . This is a time for candid appraisal of our flaws and not a time for scapegoating, fingerpointing, or procrastination. It is a time for reaffirming the basic right of all employees to a safe and humane working environment. It is also the time to take action to show that we mean what we say.

4 "Making the numbers" is not an excuse for the abuse of anyone. Those whose unacceptable behavior continues wiil be removed from their positions. We obviously cannot ensure that however seriously intentioned our words may be, they will not be treated with winks and nods, or skepticism, by some of our 700,000. employees. But let there be no mistake that we mean what we say and we will enforce our commitment to a workplace where dignity, respect, and fairness are basic human rights, and where those who do not respect those rights are not tolerated. Our intention is make the workroom floor a safe, more harmonious, as well as a more productive workplace. 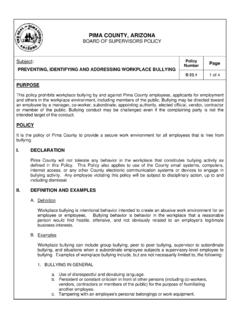 Subject: PREVENTING, IDENTIFYING AND ADDRESSING WORKPLACE BULLYING Policy Number Page D 23.1 3 of 4 III. PROCEDURE A. Reporting 1. Targets: When an employee believes that he or she is the target of behavior that may satisfy the definition of workplace bullying (as defined herein), the employee must report any and all EL903 - Agreement Between USPS and the National …

AGREEMENT between the United States Postal Service and the National Postal Mail Handlers Union, A Division of the Laborers’ International Union of North America,

attachment 2 physician or practitioner certification please answer the following questions to the best of your ability: _____ _____ patient's name (printed) patient's ssn or medical #