Validation of a liquid chromatographic method for ...

5 This method has been validated, as described in ty, in order to guarantee metrological traceability (ISO this article, in order to guarantee that it is adequate for the Guide 35:2006; JCGM, 2008). This traceability, which is intended use (ICH, 1994; Anvisa, 2003; ISO 17025:2005). a requirement of the ISO 17025:2005 standard and corres- and to prove its capacity to generate accurate results that ponds to an unbroken chain of comparisons to national could be used for the mass balance calculation. or international standards, all having stated uncertainties . (Duewer et al., 2004), cannot be ensured through the use MATERIALS AND methods . of non-certified reference materials (also called reference standards). Instrumentation The availability of certified reference materials for pharmaceutical use remains limited. The United States For determination of related substances, a high perfor- Pharmacopeia (USP), for instance, whose reference stan- mance liquid chromatographic (HPLC) Shimadzu system dards have been available since 1926 (Williams et al.)

6 , equipped with a quaternary pump LC-20AT, on-line degas- 2006), developed its first CRM only in September 2008: ser DGU-20A3/DGU-20A5, auto-sampler SIL-20A/20AC, dextromethorphan hydrobromide, which was followed photodiode array detector SPD-20A and interface CBM- in 2009 by theophylline, phenytoin and carbamazepine 20A/20A, was used. The data were processed using the CRMs (The United States Pharm. Convention, 2010). We software Lab Solution. The system suitability test (5 repli- expect that in the near future the demand for pharmaceuti- cate injections, allowed relative standard deviation for peak cal CRMs may be increasingly met by Pharmacopeias or areas < 2 %) (USP 32) was carried out before each set of National Metrology Institutes (NMIs). Validation experiments using a 10 g/g captopril solution, The requirements for preparation of CRMs are in order to confirm the HPLC system performance.

7 Described by the ISO Guides 34:2009 and 35:2006, and The differential scanning calorimetry measurements include material characterization, homogeneity evalu- were performed using a DSC Q1000 (TA Instruments). ation, short- and long-term stability studies, as well as according to Moreira et al. (2010). For gravimetric pre- measurement uncertainty estimation. paration of samples, an analytical balance AUW 220D. The characterization step includes the determination (Shimadzu) with mg resolution was used. of the property value, which in our case was the captopril content in the CRM and was determined by mass balance Samples and reagents according to eq. 1. The studies were performed using samples of the Captopril (%) = 100 % organic impurities (%) first Inmetro batch of captopril CRM, whose certified inorganic impurities (%) volatiles (water and sol- reference value and expanded uncertainty (U), using the vents) (%) (eq.)

8 1) value of 2 as coverage factor for a confidence level of ap- proximately 95 % (ABNT / Inmetro, 2003), was +. The mass balance approach allows determination of % w/w (Nogueira et al., in press). API content with standard deviations up to 10 times lower The captopril USP reference standard (batch H. than those obtained by traditional assay methods (Hofer, 09120H, %) and the captopril disulfide USP reference Olsen, Rickard, 2007). The precision of the HPLC assays, standard (batch H0F251, %) were not dried before use. for instance, is estimated to be in the range of The reagents used for sample preparation and chro- (Gorog, 2005). More precise results (smaller standard matographic analysis were methanol HPLC grade (Tedia deviations) have the advantage of consequently lower Brazil), o- phosphoric acid 85 % w/w for analysis (Tedia associated measurement uncertainties. This justifies the Brazil), hydrochloric acid (Merck), sodium hydroxide increasing importance of tests for determination of impuri- (Merck), hydrogen peroxide 30 % (Merck) and ties compared to those for assay of analytes (Gorog, 2005).

9 Water type I. In order to use the mass balance equation, it is ne- cessary to accurately quantify all impurities, including method description those from organic synthesis and degradation products. The organic impurities content in the captopril candidate The HPLC method was based on the related subs- certified reference material was determined by RP-HPLC- tances test of captopril described in the corresponding Validation of a liquid chromatographic method for determination of related substances 353. Brazilian Pharmacopeia IV monograph. The analysis signal-to-noise (S/N) ratio method (ICH, 1994). conditions were: mobile phase, methanol - phosphoric acid The repeatability was evaluated by six repeated in- % (55:45, v/v); flow-rate, 1 ml/min; UV detection, jections of captopril and captopril disulfide USP reference 220 nm; injection volume, 20 l. The HPLC column was standards (10 g/g individual solutions).

10 This test was RP18, 25 cm x mm , 5 m, Supelcosil (Supelco), repeated on a different day by a different analyst in order to which a pre-column RP18, mm , 5 m (Varian) to verify intermediate precision. was attached. The recovery tests for accuracy evaluation were performed using solutions of captopril disulfide USP. method Validation reference standard at the concentrations of , and g/g (75% to 125% of the total organic impurity li- All solutions for Validation studies were prepared mit of 10 g/g), with or without the addition of 500 g/g gravimetrically, using mobile phase as the diluent. of captopril CRM or captopril USP reference standard The method specificity was evaluated by means (considered as matrixes). These two matrixes were also of analysis of diluent (mobile phase), captopril disulfide individually analyzed to determine their original captopril USP reference standard (10 g/g solution), captopril USP disulfide content. 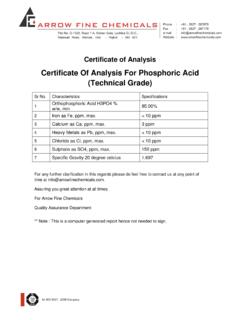 Certificate Of Analysis For Phosphoric Acid … 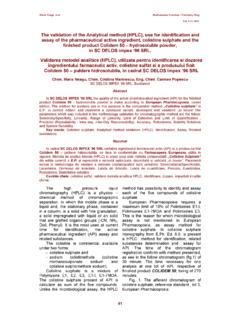 The validation of the Analytical method (HPLC), use …