2 These models have been developed into a comprehensive set of design rules which have been introduced into Eurocode 3 part [prEN 1993-1-8, 2003]. These rules allow the designer to calculate the strength, stiffness and deformation capacity of Moment Connections . The following steps are required to design a Moment connection : Determine the path of the forces through the connection . the tensile force in the top flange of the beam shown in Figure must pass through the fillet welds of the connected end plate, the end plate in bending, the bolts in tension, the column flange in bending, the column web in tension, the column web in shear and the column web in compression, in order to balance the compression force coming from the beam compression flange. Furthermore the path of other forces ( the shear force from the beam) has to be determined in a logical way. Of course the forces in the connection must be in equilibrium with the applied bending Moment , shear force and /or the normal force acting on the connection .

5 For hand calculation this can only be accounted for in a simplified way, because the general approach results in a complicate iterative calculation procedure. This is not a problem for software. An example of the components for a bolted beam to column connection is given in Figure 46. hgfiifg h c ed de c unstiffened column web in shear d unstiffened column web in compression e beam flange in compression f column flange in bending g bolt row in tension h end plate in bending i unstiffened column web in tension Figure Components represented by springs in a bolted beam to column joint Practical application of the component method The component method allows the designer to analyse many different connection configurations. It enables the design of more economical Connections than the traditional design methods based on tables (that could only be used for a limited number of connection configurations). The component method is complex and requires considerable effort even for the simplest Moment connection .

6 For practical application, therefore several computer programs have been developed, which can quickly determine a connection 's mechanical properties. These computer programs can also be used to examine the effects that small changes have on a connection 's strength, stiffness and deformation capacity. It is noted, however, that before using such programs, the designer must check that the software has been validated. Determination of the connection 's strength, stiffness and rotational capacity As indicated above, the properties needed for the global analysis of a structure are the bending Moment strength (resistance) Mj,Rd, the deformation / rotational stiffness Sj and the deformation /. rotational capacity Cd. Figure gives an example of a beam to column connection and its Moment rotational diagram. In tests, the first part of the Moment rotational diagram (representing the stiffness), is usually linear. However, the linear elastic curve deviates from its straight line at low bending moments [Wald, Steenhuis, 1993].

7 This is due to local plasticity caused by stress concentrations and residual stresses. In prEN1993-1-8 it is assumed that up to 2/3 of the calculated Moment resistance the behaviour is elastic, following the straight line determined by the calculated (initial) stiffness. After reaching 2/3 of the Moment resistance, the stiffness is reduced until the Moment resistance Mj,Rd is reached. Rules are given in prEN1993-1-8, see also the question 6Q&A1. Component - column web in tension M, Moment , kNm connection Initial stiffness Sj,ini Joint resistance Mj,Rd Experimental curve Components in tension Elastic Design curve limit 2/3 Mj,Rd Shape by stiffness ratio factor Components in compression Componenet - web panel in shear Component - olumn web in compression Rotation, , mrad Deformation capacity j,Cd Joint Figure Basic components of a beam to column joint and the resulting Moment rotational diagram 47. The required deformation capacity (rotational capacity) of a joint depends on the type of the structure ( statically determined or statically indeterminate) and the method of global analysis for the whole structure (elastic or plastic), but seldom this exceeds 60 mrad, see Figure The determination of the rotational capacity is qualitative.

8 In prEN1993-1-8, deemed to satisfy rules are given, if yielding of the column flange or end plate in bending or the column web panel in shear governs the strength, then it is assumed that sufficient rotational capacity is provided. The prediction of the available rotational capacity by the component method, based on the deformation capacity of each component, is under development. The column flange and the end plate in bending and the column web panel in shear are ductile components. The bolts in tension and shear and welds are typical examples of brittle components. Therefore, both modes of failure should not govern the strength of the connection . Such design will lead to brittle Connections and potentially unsafe structures. In the evaluation of the rotational capacity, it is necessary to consider possible unfavourable differences between the calculated strength and the actual strength of the component that is to provide the rotational capacity. Such deviations may be caused by a higher actual yield strength of the component material or a difference in the actual dimensions or due to the calculation model underestimating the actual strength.

10 For example, do the values allow for Connections into the web of a column/beam, thin end plates vs. thick end plates, extended vs. flush end-plates Please provide the background to this table. _____. To make an elastic global analysis according to clause , you may take into account a stiffness, which is assumed to be the initial stiffness divided by the stiffness modification coefficient , see Figure The coefficient is given in prEN 1993-1-8 Table 48. Moment , M, kN. Sj,ini Secant stiffness =. S j,sec 1. Initial stiffness Sj,ini Rotation, , rad Figure Stiffness for global elastic analysis The thickness of the end plates influences the initial stiffness of the connection but not the stiffness modification coefficient . For beams connected to the web of an unstiffened column or beam, the stiffness modification coefficient is not relevant and these joints may be considered as hinges, see [Gomes, Jaspart, 1994] and [Gomes et al, 1994], for simplicity. For a continuous beam connected on both sides of the column web, see Figure , the connection can be considered as a beam splice' with longer bolts. 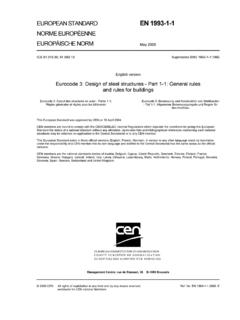 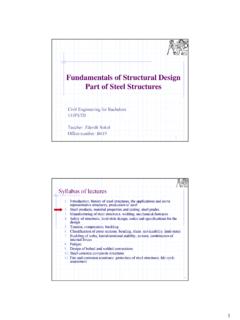 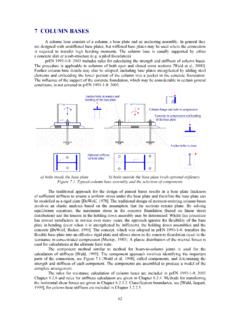 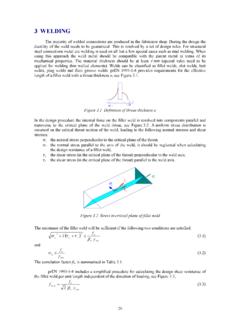 20 3 WELDING The majority of welded connections are produced in the fabricator shop. During the design the ductility of the weld needs to be guaranteed. 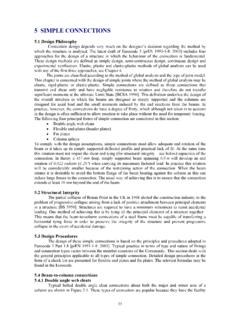 35 5 SIMPLE CONNECTIONS 5.1 Design Philosophy Connection design depends very much on the designer’s decision regarding the method by which the structure is analysed. 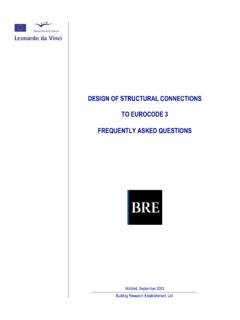 DESIGN OF STRUCTURAL CONNECTIONS TO EUROCODE 3 …