2 Thousands ed solutions for different end Applications . of developers use OpenCV to power their own specialized Applications , making it the most The complexities of these systems can cre- widely-used library of its kind. The OpenCV project is under active development, with regular ate bottlenecks for developers in the form of updates to eliminate bugs and add new functionality. The mainline development effort targets longer development times, more complicated the x86 architecture and supports acceleration via Intel's proprietary Integrated Performance development environments and issues with Primitives (IPP) library. A recent release also added support for graphics processing unit (GPU).

3 Application stability and quality. Developers acceleration using NVIDIA's Compute Unified Device Architecture (CUDA) standard. can address these problems using sophisti- OpenCV's greatest asset is the sheer breadth of algorithms included in its standard distri- cated software packages such as OpenCV, bution. Figure 1 on page 2 shows an incomplete list of some of the key function categories in- but migrating this software to embedded cluded in OpenCV. These range from low-level image filtering and transformation to sophisti- platforms poses its own set of challenges. cated feature analysis and machine learning functionality. A complete listing of every function This paper will review how to mitigate some and use case is beyond the scope of this article, but we will consider the unique requirements of these issues, including C++ implemen- of developers in the embedded vision space.

4 For these developers, OpenCV represents an tation, memory constraints, floating-point attractively comprehensive toolbox of useful, well-tested algorithms that can serve as building support and opportunities to maximize per- blocks for their own specialized Applications . The question then becomes whether or not formance using vendor-optimized libraries OpenCV can be used directly in their embedded systems. and integrated accelerators or co-processors. Despite its original development focus for use with PC workstations, OpenCV can also Finally, we will introduce a new effort by be a useful tool for embedded development. There are vendor-specific libraries that offer Texas Instruments (TI) to optimize vision sys- OpenCV-like capabilities on various embedded systems, but few can match OpenCV's ubiquity tems by running OpenCV on the C6000.

5 In the computer vision field or the sheer breadth of its included algorithms. It should come as digital signal processor (DSP) architecture. no surprise that OpenCV has already been ported to the ARM architecture, a popular CPU. Benchmarks will show the advantage of us- choice for embedded processors. It's certainly possible to cross-compile the OpenCV source ing the DSP by comparing the performance code as-is and use the result with embedded devices, but memory constraints and other of a DSP+ARM system-on-chip (SoC). architectural considerations may pose a problem. This white paper will examine some of the processor against an ARM-only device. specific obstacles that must be overcome for OpenCV to achieve acceptable performance on 2 Texas Instruments Figure 1.

7 embedded hardware and software expand in complexity while development cycles accelerate and contract. The follow- ing Applications are representative of the current state and future direction of the overall embedded vision space. Let's start with industrial vision Applications . One common industrial vision task is assembly line inspec- tion, which detects, classifies and sorts objects to maximize manufacturing speed and quality. These vision algorithms are often run on costly computer workstations; migrating to an embedded DSP is one obvious way to save on price and power consumption. Even Applications that are already implemented with embed- ded systems can be improved by condensing discrete logic into the DSP.

8 For example, many industrial vision systems share the basic shape illustrated by Figure 2. The image signal processor (ISP) is a field program- mable gate array (FPGA) that performs time-critical pre-processing on incoming data before it reaches the DSP. This FPGA becomes more expensive and consumes more power proportional to its workload. One way to maximize the efficiency of the overall embedded system is to integrate as much pre-processing as pos- sible into the DSP. The challenge then becomes keeping up with rapid improvements in the physical system. ISP DSP. Figure 2. Typical embedded vision system, including camera, pre-processing FPGA and DSP. OpenCV on TI's DSP+ARM platforms: Mitigating the challenges of porting OpenCV to embedded platforms July 2011.

10 As vision algorithms become more capable and reliable, video surveillance systems will become more auto- mated and sophisticated. This presents a particular challenge to embedded video surveillance systems, since cutting-edge algorithms that are developed on PCs may require considerable rework and optimization to run efficiently on an embedded device. Consequently, many embedded video surveillance Applications are limited to the simpler encode-and-record paradigm. One last example application from the broad category of embedded vision is automotive vision. Unlike the previously discussed application spaces, automotive vision is almost exclusively the domain of embed- ded processors.

EMBEDDED SYSTEMS PROGRAMMING WITH THE …

Programming, With, System, Embedded, Embedded systems programming with the 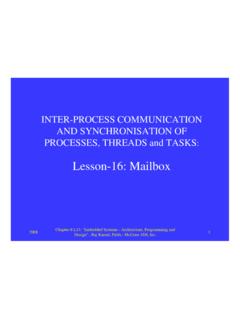 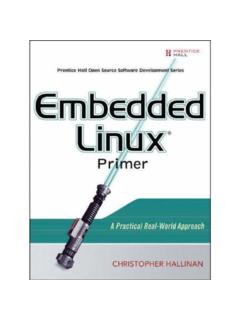