3 acceptance sampling by attributes terms (3 of 3). Rectifying Inspection All defective units found in the inspected sample are removed and replaced with compliant product AND if the lot is rejected, 100%. inspection is performed and all defective units are replaced. AOQ. Average Outgoing Quality is the expected outgoing quality of a lot (of a given incoming quality) after rectifying inspection has been performed. AOQL. Average Outgoing Quality Limit is the worst case AOQ and is specified at the incoming quality that after rectifying inspection results in the maximum AOQ. ATI. Average Total Inspection is the expected number of units inspected assuming rectifying inspection. 2014 minitab , Inc. minitab acceptance . sampling . 2014 minitab , Inc. minitab Select plan for specific OC curve Specify AQL, RQL, alpha, and beta Optionally specify lot size (N). Output is sample size (n) and c (and if lot size N is provided also AOQL and ATI). Inspect a sample of size n, accept if # of defectives c, reject lot if # of defective is > c.

4 Example Use minitab to set up an inspection plan for an advertising firm to inspect giveaway flashlights ( does the flashlight work or not). 2014 minitab , Inc. Developing acceptance sampling Plans We will generate two plans AQL (Acceptable Quality Level) of RQL (Rejectable Quality Level) of and also at Leave alpha at default of Leave beta at default of Lot size = 2500. Measuring defectives (use Percent defective for units). 1. Choose Stat Quality Tools acceptance sampling by Attributes. 2. Complete the dialog box as shown on next slide 3. Click OK. 2014 minitab , Inc. acceptance sampling plan Shown for RQL = Actual alpha vs. requested alpha Note that while we asked for an alpha of , we got an alpha of Due to the discrete nature of the plan (c must be an integer), the actual alphas and betas will be slightly different than the requested values. 2014 minitab , Inc. Based on AQL. The OC curve describes the discriminatory power of an acceptance sampling plan .

5 The OC curve plots the probabilities of accepting a lot (Pa). versus the fraction defective. 2014 minitab , Inc. Provide 2 points AQL @ Alpha RQL @ Beta minitab then provides the OC curve 2014 minitab , Inc. ANSI / ASQ (MIL-STD-105). acceptance sampling . 2014 minitab , Inc. ANSI / ASQ Created pre-computer as MIL-STD-105. Specify AQL, lot size (required). Specify level I, II, III, S1, S2, S3, or S4 (level II is almost always used and will be used throughout this document.). Output is n, c, alpha and beta Default alpha is nominally close to 5%. Beta at 10% Pa will vary (potentially greatly) depending on choice of AQL, lot size, and level. Example: Given a Level II, an AQL of and lot sizes of 100 and 1000, the implied RQL. at Pa of 10% is respectively and Example: Use to set up an inspection plan for an advertising firm to inspect giveaway flashlights ( does the flashlight work or not). 2014 minitab , Inc. Developing acceptance sampling plan We will generate one plan AQL (Acceptable Quality Level) of Lot size = 2500.

7 This is ONLY. because we chose an RQL that matches the default implied RQL of If the true RQL was (or any other value) the curves would not match. The is essentially an AQL system you do not specify the RQL. This will be of importance when we go to C = 0 plans. 2014 minitab , Inc. C = 0 : CONCEPT AND. JUSTIFICATION. 2014 minitab , Inc. Accept on None (C= 0) Plans The Accept on None commonly called C = 0 plans are lot sampling plans for attribute data designed such that if one defect is found in the inspected sample, the lot is rejected. These plans have both advantages and disadvantages over traditional lot inspection where you typically have an accept number C greater than zero ( accept on 3, reject on 4). Where the ANSI (MIL-STD-105) is an AQL system (protects producer - If the quality is at the AQL let us make sure we can ship), C = 0 is an RQL system (protects consumer if the quality is at the RQL let us make sure we reject). 2014 minitab , Inc.

8 Advantages of C = 0 (1 of 2). Because no lot is accepted if there is a defect in the sample, the perception of quality is preserved for both the consumer and the inspector. For many this is a prime driver of the use of C=0 plans. It is simpler to administrate. For lots with actual defect levels greater than 0 but less than the RQL, the C=0 approach will more likely reject the lot (protect the consumer). It requires only a designated RQL, no AQL is specified. Note that the US Government is moving to eliminate the use of AQLs in all contracts to support the movement away from an AQL-based inspection (detection) strategy to implementation of an effective prevention-based strategy including a comprehensive quality system, continuous improvement .. (MIL-STD 1916, 1-APR 1996, p1) . 2014 minitab , Inc. Advantages of C = 0 (2 of 2). If quality is near 100%, C=0 plans will result in fewer total parts being inspected. The Zero acceptance plans developed by Squeglia are designed to provide overall equal or greater consumer protection with less inspection than the corresponding MIL-STD-105 sampling plans.

9 (Squeglia). If the MIL-STD-105 or the ANZI is invoked by contract, Squeglia's plans can be used as they provide the same or better protection to the consumer (however they may impact the producer negatively see next slide). 2014 minitab , Inc. Disadvantages of C = 0. If there is an AQL (and using typical value of alpha = ) a standard plan (either minitab or ) would theoretically accept a lot with the AQL level of defectives 95% of the time whereas the C=0 plan would reject it with much higher frequency. If quality is not near 100%, The C=0 plans will result in more rejected lots. If the practice of rectifying Inspection is used, C=0 plans will result in greater total inspection quantities unless quality is near perfect. It requires a carefully chosen RQL. The AQL will essentially float. In the special case where the MIL-STD-105 or has been invoked, an AQL. has been provided, and a C= 0 plan is desired/required, there is no need to carefully select the RQL , as it is a direct result of the AQL.

10 2014 minitab , Inc. Comparison AQL and RQL 2%. Standard C=0. C number 4 0. Reject number 5 1. Sample size 379 111. Prob(accept) at AQL Prob(Reject) at RQL 90%. AOQL at at incoming % defective incoming % defective It can be seen that both plans provide the same protection to the consumer at the RQL of 2%. They will both reject such a lot 90% of the time. The difference is that the C = 4 plan will accept lots at the AQL ( ) of the time while the C = 0 plan will only accept such a lot of the time. This is because (as stated earlier) the C = 0 plans do not invoke an AQL. 2014 minitab , Inc. Comparison OC Curve As can be seen below, the probability of accept is the same for both plans when the lot quality is 2% (RQL) but is vastly different at the AQL level of In fact the Prob(accept) for the C = 0 plan is lower (in many cases significantly) for all lot quality values less than the RQL and slightly greater for lot quality values greater then the RQL. 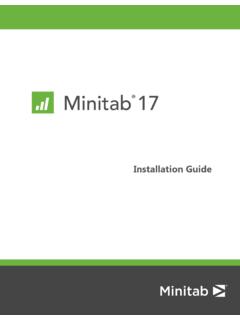 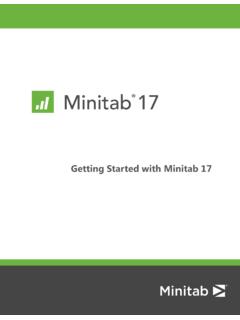 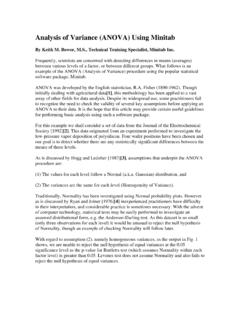 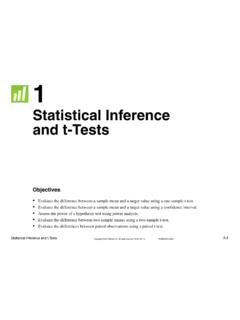 Learn how Minitab can help you 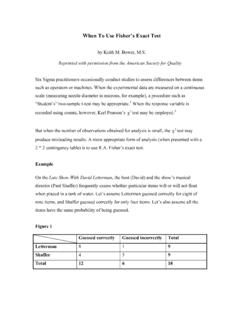 When To Use Fisher’s Exact Test - Minitab

Fisher’s exact test considers all the possible cell combinations that would still result in the marginal frequencies as highlighted (namely 9, 9 and 12, 6). 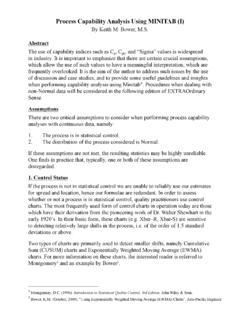 Conclusion Capability analyses are frequently reported as part of an ongoing quality program though, in many instances, statistics are merely reported and an … 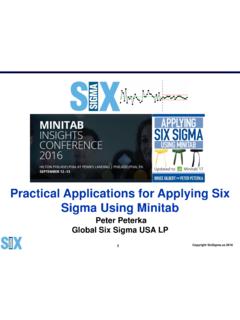 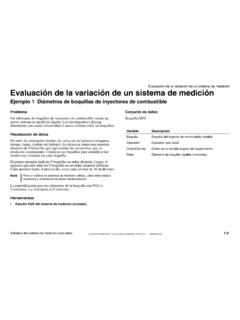 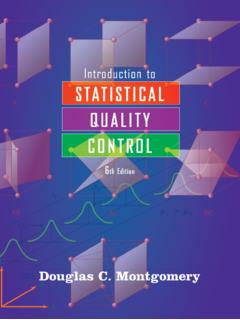 I Sixth Edition ntroduction to - dl4a.org

About the Author Douglas C. Montgomeryis Regents’ Professor of Industrial Engineering and Statistics and the Arizona State University Foundation Professor of Engineering 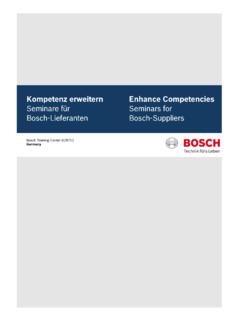