Coping with climate change risks and opportunities for insurers Chapter 12 Energy 12.1 Introduction and background 12.2 Recent Insurance history of the energy …

2 All of these risks are exposed to elemental losses but offshore installations are particularly vulnerable to storm damage. The risk transfer programmes that are put together for these risks require the participation of direct insurers, reinsurers, self Insurance or captive arrangements, and industry funded mutual companies. Other financial instruments such as Catastrophe Bonds and Hedge Funds are also utilised to provide the necessary protection capital for these risks. The largest Energy market in the UK is Lloyd's of London where approximately 1019 million of business is underwritten, representing 6% of business transacted at Lloyd's. The rest of the UK Energy market is made up of insurers writing specialist Energy lines many of which will be London-based UK branches of overseas subsidiaries as well as large multinational insurers writing onshore downstream risks in their general property and casualty book of business.

3 The CII climate change review took place during a period of great contrasts for the Energy market. The review commenced in the aftermath of two of the worst hurricane seasons on record. Of the 10 most costly hurricanes in the United States of America ( ), 3 occurred in 2005 Katrina, Rita and Wilma and 4 occurred in 2004 Charley, Frances, Ivan and Jeanne ( Insurance Information Centre 2006). In total some 116 oil platforms were destroyed and 56 more severely damaged by the 2004 2005 hurricanes (Mills, E. and Lecomte, E. 2006). The total Energy losses for the year 2005 were estimated to be US$19billion of which some US$15billion was due to elemental losses in North America (Willis, 2006, 1). During the actual period of the review the two years of 2006 and 2007 proved to be two of the most benign years on record enabling reinsurers and insurers to make near record profits.

4 Such vagaries in fortune made the Insurance cycle revolve almost full circle in a relatively short period of time but in so doing left a legacy for the future. Although the Energy market covers far more than just North American oil rigs, windstorm cover for Gulf of Mexico exposures is the elephant in the corner that cannot be ignored. Business from Gulf of Mexico offshore risks accounts for approximately 25% of annual global Energy premiums (Ulbrich, W. (2006) and as such constitutes a major part of any upstream Energy underwriter's book of business (Willis, 2006, 1). Thus it is an important area of strategic consideration for most Energy insurers. The first part of this Chapter will take a chronological look at the impacts of these extremes of fortune in the on both the upstream and downstream markets as well as considering other aspects of the Energy market.)

5 The second part of the Chapter will look at the future of Energy production as this is increasingly linked with the global response to impending climate change and the spectre of Peak Oil . This section will focus particularly on developments in existing fuel technologies and the growth in Renewable Energy Technology (RET). The third part of the Chapter will assess the implications of these changes for the Energy Insurance market. The final part of the Chapter presents the conclusions and recommendations. Recent Insurance history of the Energy Insurance market It was the best of times; it was the worst of times 1. Energy Insurance is often described as one of the most volatile of Insurance classes and the period 2004 to 2007 clearly demonstrates the capricious character of this line of business.

6 The nature of Energy production and distribution makes its Insurance arrangements highly susceptible to large scale losses as risks are often situated in some of the most hostile environments on the planet; environments which are greatly exposed to elemental forces. The worst of times The disastrous nature of the 2004 and 2005 hurricane seasons had a major effect on the Energy upstream market simply by virtue of the amount of upstream business based in the Gulf of Mexico and the southern states of the In the UK, Lloyd's reported Energy losses of approximately 1,307 million for 2005, the first real test of the restructuring programme put in place by Lloyd's during 2002 and 2003 (Lloyd's, 2006, 1). As well as the large claims generated by Katrina and Rita there were other large Energy losses that year at the Suncor Refinery in Canada and in India where an Oil and natural gas corporation (ONGC) platform was severely damaged by fire, a loss aggravated by the severe weather conditions that were 1 Charles Dickens.

7 A Tale of Two Cities Coping with climate change risks and opportunities for insurers 2. Chapter 12 Energy present in the region at the time. However, it was Hurricane Katrina that had the most devastating impact on Lloyd's results as it struck in an area where Lloyd's was a clear market leader in this class of business (Lloyd's, 2006, 1). The upstream market response to these disastrous losses was inevitable with restrictions in covers and terms being coupled with reductions in capacity (Lloyd and Partners, 2005 July) and dramatic increases in rates up 400% in some instances (JLT, 2006, ed. 10). As a more longer term consequence there were distinct moves to segregate the underwriting of elemental . cover for upstream risks operating in the Gulf of Mexico from all other types of Energy risk (Cooper, M.)

8 2006, Willis, 2006, 1, JLT 2006, ed. 11). Aggregate sub-limits were applied for Gulf of Mexico named windstorms which effectively give the market the ability to withstand 2 or 3 devastating hurricanes in one season (JLT, 2006, ed. 12). Understandably there were moves towards increasing the minimum percentage deductibles to be applied to all windstorm losses (JLT, 2006, ed. 11). This hardening of the market served to attract new capital into the market place which replaced lost capacity and so enabled most Insurance programmes to be completed. The operation of the market cycle in Insurance is often criticised and certainly it frustrates all parties at times, yet it serves a useful purpose in helping to attract capital into the market place and so ensuring that cover is available for the future.

9 For example, despite two seasons of heavy losses, the influx of new capital and the restructuring of protection arrangements gave rise to the expectation in Lloyd's that the market would be able to write seven percent more business in 2006 (JLT, 2006, ed. 10). The cycle helped to replenish capital from fresh sources and so served the market well during this period and as such worked better than the model favoured by the mutual companies. In the mutual market, the retrospective payment of losses hit members at a time when they had already suffered heavy losses. Overall the concept of mutuality was put under threat following the 2004/5 hurricanes as members with non-Gulf of Mexico exposures balked at the idea of having to pay more to cover those with exposures in these areas as well as coming to realise that the retrospective addressing of losses only added to risk uncertainty (Willis, 2006, 2).

10 Although OIL was to survive the crisis, albeit with a fall in membership to 57 companies (Willis, 2008), sEnergy was not so resilient and went into run off in 2006 (JLT, 2006, ed. 12). The respite that was to follow in 2006 and 2007 gave the mutual companies time to restructure their model and their approach to the reinsurance and Insurance markets. This has put them on a stronger footing, albeit providing reduced protection to their members than the levels enjoyed before 2004 (Willis, 2008). As such they are still an important part of the risk protection arrangements available to the market. Some commentators saw underwriters being as much victims of bad practice as bad weather and there was a sense that the upstream market needed to move away from pricing on a trader mentality basis towards greater risk differentiation (Willis, 2006, 1).

1 CII recognition of prior learning for UK university … 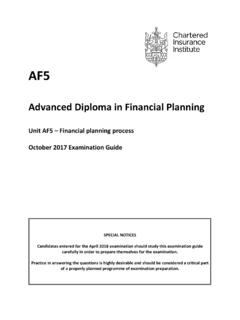 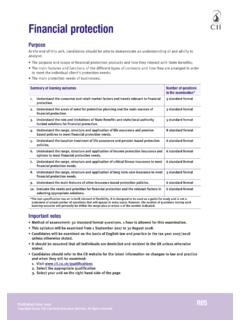 Published June 2017 Copyright ©2017 The Chartered Insurance Institute. All rights reserved. R05 Financial protection Purpose At the end of this unit, candidates should be able to demonstrate an understanding of and ability to 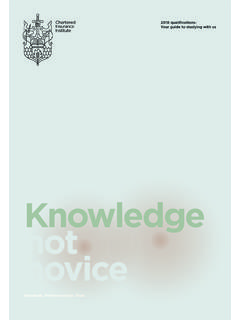 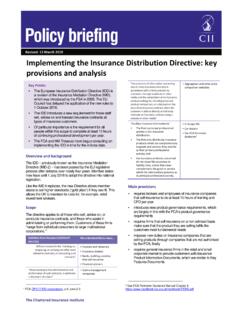 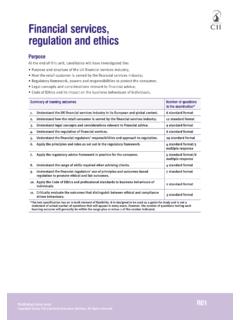 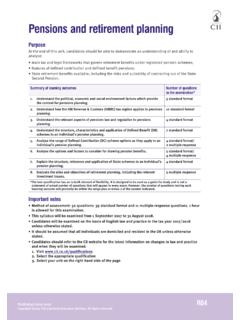 Pensions and retirement planning - The Chartered …

Published June 2017 Copyright ©2017 The Chartered Insurance Institute. All rights reserved. R04 Pensions and retirement planning Purpose At the end of this unit, candidates should be able to demonstrate an understanding of and ability to 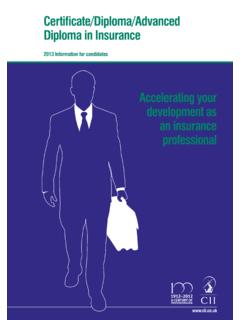 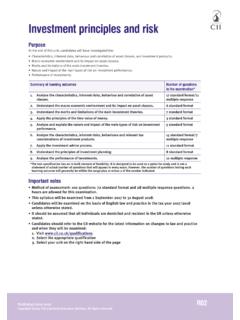 Investment principles and risk - The Chartered … 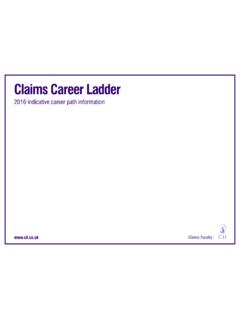 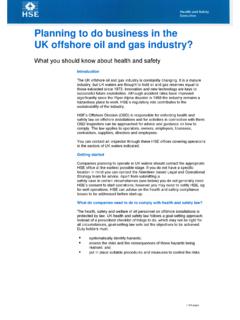 Planning to do business in the UK offshore oil and … 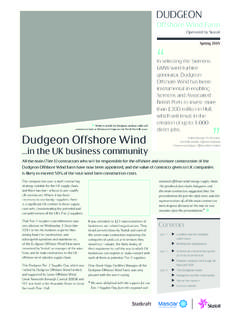 Operated by Statoil Spring 2015 “In selecting the …

All the main (Tier 1) contractors who will be responsible for the offshore and onshore construction of the Dudgeon Offshore Wind Farm have now been appointed, and the value of contracts given to UK companies 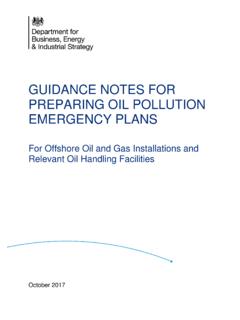