Comparison of Erosion Rates of SUS304 and SUS316 …

2 The average Erosion rate of SUS304 steel is approximately 20% faster than that of SUS316 steel , whereas the maximum Erosion depth evaluated by extreme value analysis does not depend on steel type. From microstructural observation of Erosion interfaces, it was found that Fe Cr Sn and Fe Cr Mo Sn layers form at the Erosion interfaces of SUS304 and SUS316 steels, respectively. Keywords: stainless steel , Erosion Rate, Sn 3mass%Ag , Extreme Value Analysis, Microstructure 1. Introduction polyvinyl chloride is easily attacked by the molten lead-free Although lead-free soldering has spread to many elec- solder . Moreover, the Erosion behavior of polyvinyl chlo- tronic instruments, there are still several problems which ride on stainless steel was confirmed to be similar to that have to be settled.

4 Lyzer (EPMA). Since the incubation period of the occurrence of Erosion changes depending on such conditions, its evaluation 2. Experimental becomes difficult.[2] SUS304 steel samples 85 8 2 mm and SUS316 steel We have developed a new method using polyvinyl chlo- samples 105 8 2 mm were prepared for the Erosion test. ride to accelerate the occurrence of stainless steel Erosion Table 1 shows the chemical compositions of the stainless by the molten lead-free solder .[3] Since polyvinyl chloride steels used in this study. Polyvinyl chloride powder has a strong flux function, stainless steel attached with (Wako, n: about 1100) was prepared. The average diame- Table 1 Chemical compositions of SUS304 and SUS316 stainless steels used.

5 C Si Mn P S Ni Cr Mo Fe (mass%). SUS304 Bal. SUS316 Bal. 35. Transactions of The Japan Institute of Electronics Packaging Vol. 2, No. 1, 2009. 20 20 mm in one measurement and convert them into color mapping data. In this study, twenty points which have relatively large Erosion depths after immersion of 100. hours were evaluated for each specimen using time series analysis. An extreme value analysis was also conducted. Except for the SUS304 specimen immersed for 50 hours, an area approximately 8 33 mm on each side was divided into ten sub-areas and the maximum Erosion depth in each sub- area was investigated. Since the area at which Erosion occurred was relatively small in the SUS304 specimen Fig. 1 Schematic of Erosion test.

6 Immersed for 50 hours, the extreme value analysis was conducted for an 8 20 mm area on each side. For the ter of the powder particles was approximately 70 m. Poly- extreme value analysis, the Erosion area needs to be vinyl chloride was applied to the surfaces of stainless steels equally divided and each divided area has to include ero- as follows. First, the specimen of stainless steel was heated sion points. Thus, the analysis area in the SUS304 speci- up to 120 C on the hot plate and held for 4 min. The heated men immersed for 50 hours was smaller than that of any specimen was put into polyvinyl chloride powder and other specimen. This difference in the analysis area could cooled. After cooling, any excess powder on the surface of negligibly affect the analysis results.

7 The extreme value the specimen was removed. Approximately mg and 2 analysis was conducted on both sides of each stainless mg of polyvinyl chloride were attached to the SUS304 and steel sample, and thus twenty data points were obtained SUS316 specimens, respectively. for each test condition. Figure 1 shows a schematic of the Erosion test. The ero- An additional immersion of 2 hours was conducted for sion test was conducted using the Sn 3Ag lead-free specimens after the immersion test of 300 hours in order solder melted at 350 C. Erosion behavior is strongly to attach the solder to the surface of stainless steel . For affected by the flow rate of the molten solder .[2] Gener- these specimens, a microstructural observation of the ero- ally, Erosion is accelerated in parts such as an impeller, a sion interfaces was conducted using an EPMA.

8 Rotating shaft or a nozzle, where the flow rate of the molten solder becomes relatively high. In a previous study, it was 3. Results and Discussion reported that the maximum Erosion depth of SUS304 stain- Erosion test results less steel in molten Sn 3Ag solder at 350 C increases Figures 2 and 3 show general views of the SUS304 and with increasing rotation rate of the specimen.[4] In the SUS316 stainless steel specimens after the Erosion test. study, good accelerating characteristics were observed at After immersion of 50 hours, the occurrence of Erosion rotation Rates ranging from 0 rpm to 100 rpm.[4] Since was observed in both steels. The Erosion area spreads with higher rotation Rates make the test difficult because of abundant dross formation and splashing of the molten sol- der, the rotation rate of a rotation axis was 100 rpm in this study.

9 Dross, which was formed on the surface of the mol- ten solder , was removed approximately every 12 hours. When the volume of the molten solder decreased due to dross formation, a suitable amount of the solder was added into the solder bath. After immersion of 50, 100, 200 and 300 hours, the attached molten solder on the stainless steel surface was removed with a Teflon brush and the Erosion depth was measured with laser scanning equipment (optWare, Rapid 3D-2000 HDS). This equipment can measure Erosion Fig. 2 General views of SUS304 stainless steel specimen depths at intervals of m from an area approximately after Erosion test. 36. Shohji et al.: Comparison of Erosion Rates of SUS304 and SUS316 stainless Steels (3/5).

10 Scanning. The color concentration of the mapping result is relative in every specimen. As shown in Fig. 4, Erosion does not proceed uniformly over the entire specimen. The Erosion depth was investigated from the difference in depth data between the eroded areas and the non-eroded areas. In the extreme value analysis, the analyzed area as shown in Fig. 4 was evenly divided into ten sub-areas. Each sub-area was repeatedly analyzed using color map- ping until the maximum Erosion depth was recognized in the area. Fig. 3 General views of SUS316 stainless steel specimen Figure 5 shows the relationship between the Erosion after Erosion test. depth and immersion time. A linear relationship was found between the Erosion depth and the square root of immer- sion time in both steels. 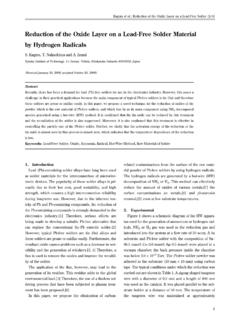 Reduction of the Oxide Layer on a Lead-Free Solder ...

1 Reduction of the Oxide Layer on a Lead-Free Solder Material by Hydrogen Radicals S. Kagata, T. Nakashima and A. Izumi Kyushu Institute of Technology, 1 … 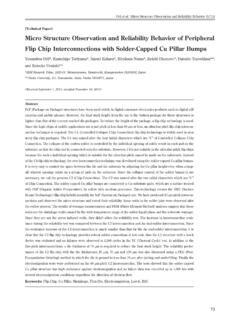 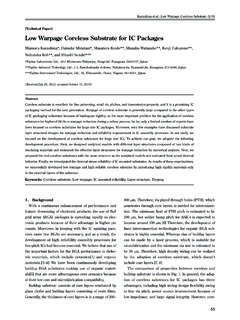 55 Kurashina et al.: Low Warpage Coreless Substrate (1/8) 1. Background With a continuous enhancement of performance and feature downsizing of electronic products, the use of Ball grid array (BGA) packages is spreading rapidly as elec- 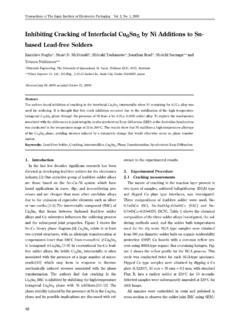 46 Transactions of The Japan Institute of Electronics Packaging Vol. 2, No. 1, 2009 Inhibiting Cracking of Interfacial Cu6Sn5 by Ni Additions to Sn- … 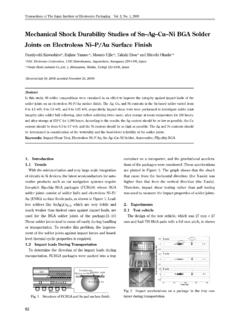