textbook chapters and tutorial units providing in-depth ... the nonmetals negative. In electrolysis, the applied voltage was thought to overpower the attraction between these opposite charges, pulling the electrified atoms apart in the form of ions ... thermodynamics and kinetics of electrode reactions. In particular, manipulation of the inter- ...

2 23 thermodynamics of galvanic cells .. 23 Analytical applications of the Nernst equation .. 23 Membrane potentials .. 275:Batteries and fuel cells .. 28 The ideal and the real .. 28 Primary and secondary batteries .. 29 Timeline of battery development .. 30 The fuel cell .. 316:Electrochemical Corrosion .. 327:Electrolytic cells .. 35 Electrolysis in aqueous solutions .. 36 Faraday's laws of electrolysis .. 37 Industrial electrolytic processes .. 381. To contact the author, please use the Web form at document covers Electrochemistry at a level appropriate for first-year college was last modified on 23 September 2004 .It can be downloaded from Web-based version is available at Chem1 Virtual Textbook is a collection of reference textbook chapters and tutorial units providing in-depth coverage of topics in college-level General a more information on the Virtual Textbook contents, see 31 Chemistry and electricityThe connection between chemistry and electricity is a very old one, going back to ALESSAN-DRO VOLTA'S discovery, in 1793, that electricity could be produced by placing two dissimilar metals on opposite sides of a moistened paper.

3 In 1800, Nicholson and Carlisle, using Volta's primitive battery as a source, showed that an electric current could decompose water into oxygen and hydrogen. This was surely one of the most significant experiments in the history of chemistry, for it implied that the atoms of hydrogen and oxygen were associated with pos-itive and negative electric charges, which must be the source of the bonding forces between them. By 1812, the Swedish chemist BERZELIUS could propose that all atoms are electrified, hydrogen and the metals being positive, the nonmetals negative. In electrolysis, the applied voltage was thought to overpower the attraction between these opposite charges, pulling the electrified atoms apart in the form of ions (named by Berzelius from the Greek for travel-ers ).

4 It would be almost exactly a hundred years later before the shared electron pair theory of LEWIS could offer a significant improvement over this view of chemical the use of electricity as a means of bringing about chemical change continued to play a central role in the development of chemistry. HUMPHREY DAVEY prepared the first ele-mental sodium by electrolysis of a sodium hydroxide melt. It was left to Davey's former assistant, MICHAEL FARADAY, to show that there is a direct relation between the amount of electric charge passed through the solution and the quantity of electrolysis products. JAMES CLERK MAXWELL immediately saw this as evidence for the molecule of electricity , but the world would not be receptive to the concept of the electron until the end of the ElectroneutralityNature seems to strongly discourage any process that would lead to an excess of positive or negative charge in matter.

5 Suppose, for example, that we immerse a piece of zinc metal in pure water. A small number of zinc atoms go into solution as Zn ions, leaving their electrons behind in the metal:Zn(s) Zn2+ + 2e As this process goes on, the electrons which remain in the zinc cause a negative charge to build up within the metal which makes it increasingly difficult for additional positive ions to leave the metallic phase. A similar buildup of positive charge in the liquid phase adds to this inhibition. Very soon, therefore, the process comes to a halt, resulting in a solution in which the concentration of Zn2+ is still too low (around 10 10 M) to be detected by ordinary chemi-cal means.

6 Fig. 1: Oxidation of metallic zinc in contact with waterPage 4 ElectrochemistryThere would be no build-up of opposing charges in the two phases if the excess electrons could be removed from the metal or the positive ions consumed as the reaction proceeds. For example, we could drain off the electrons left behind in the zinc through an external circuit that forms part of a complete electrochemical cell; this we will describe later. Another way to remove electrons is to bring a good electron acceptor (that is, an oxidizing agent) into contact with the electrode. A suitable electron acceptor would be hydrogen ions; this is why acids attack many metals. For the very active metals such as sodium, water itself is a sufficiently good electron degree of charge unbalance that is allowed produces differences in electric potential of no more than a few volts, and corresponds to unbalances in the concentrations of oppositely charged particles that are not chemically significant.

7 There is nothing mysterious about this prohibition, known as the electroneutrality principle; it is a simple consequence of the thermodynamic work required to separate opposite charges, or to bring like charges into closer contact. The additional work raises the free energy of the process, making it less only way we can get the oxidation of the metal to continue is to couple it with some other process that restores electroneutrality to the two phases. A simple way to accomplish this would be to immerse the zinc in a solution of copper sulfate instead of pure water. As you will recall if you have seen this commonly-performed experiment carried out, the zinc metal quickly becomes covered with a black coating of finely-divided metallic copper.

8 The reaction is a simple oxidation-reduction process, a transfer of two electrons from the zinc to the cop-per:Zn(s) Zn2+ + 2e Cu2+ + 2e Cu(s)The dissolution of the zinc is no longer inhibited by a buildup of negative charge in the metal, because the excess electrons are removed from the zinc by copper ions that come into contact with it. At the same time, the solution remains electrically neutral, since for each Zn ion introduced to the solution, one Cu ion is removed. The net reactionZn(s) + Cu2+ Zn2+ + Cu(s)quickly goes to Potential differences at interfacesThe transition region between two phases consists of a region of charge unbalance known as the electric double layer.

9 As its name implies, this consists of an inner monomolecular layer of adsorbed water molecules and ions, and an outer diffuse region that compensates for any local charge unbalance that gradually merges into the completely random arrangement of the bulk solution. In the case of a metal immersed in pure water, the electron fluid within the metal causes the polar water molecules to adsorb to the surface and orient them-selves so as to create two thin planes of positive and negative charge. If the water contains dissolved ions, some of the larger (and more polarizable) anions will loosely bond (chemi-sorb) to the metal, creating a negative inner layer which is compensated by an excess of cations in the outer is the study of reactions in which charged particles (ions or electrons) cross the interface between two phases of matter, typically a metallic phase (the electrode) and a conductive solution, or electrolyte.

10 A process of this kind can always be represented as a chemical reaction and is known generally as an electrode processes take place within the double layer and produce a slight unbal-ance in the electric charges of the electrode and the solution. Much of the importance of elec-trochemistry lies in the ways that these potential differences can be related to the thermodynamics and kinetics of electrode reactions. In particular, manipulation of the inter-facial potential difference affords an important way of exerting external control on an elec-trode interfacial potential differences which develop in electrode-solution systems are limited to only a few volts at most.

Base, Acid, Calculation, Equilibria, Acid base equilibria and calculations 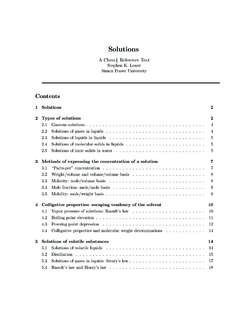 •1Solutions 1 Solutions Solutions are homogeneous (single-phase) mixtures of two or more components. They are ex-tremely important in Chemistry because they allow intimate and varied encounters between 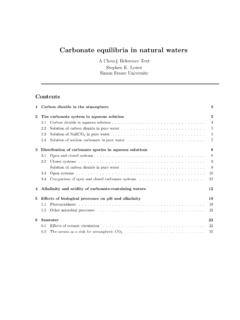 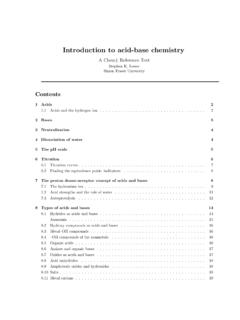 †1 Acids The concepts of an acid, a base, and a salt are ancient ones that modern chemical science has adopted and reﬂned. Our treatment of the subject at this …

Introduction, Base, Chemistry, Acid, Introduction to acid base chemistry 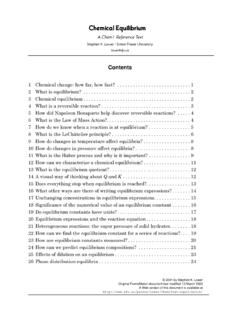 Chemical equilibrium Page 3 of 28 atoms that prevents two objects from simultaneously occupying the same space, acting in this case between the table surface and the book.

©D.J.Dunn 1 APPLIED THERMODYNAMICS TUTORIAL No.3 GAS TURBINE POWER CYCLES In this tutorial you will do the following. Revise gas expansions in turbines. Revise the Joule cycle. Study the Joule cycle with friction. Extend the work to cycles with heat exchangers. Solve typical exam questions.