Installed Sound Technical Guide TA-7. Control of Lower-Midrange Version Directivity in Sound April, 2002. reinforcement Loudspeakers Using Crossover Overlap Techniques Summary Sound reinforcement and concert loudspeaker systems must satisfy many performance criteria in order to provide not only high fidelity reproduction, but also a high degree of intelligibility. Control of directivity and coverage is an integral and important part of the design of these systems in attaining their performance goals. This paper describes a technique to increase the lower-midrange directivity and decrease the vertical beamwidth of large Sound reinforcement speaker systems through crossover overlap. Rather than operate the individual low-, mid-, and high-range sections of the speaker independently in their own frequency bands, the new technique overlaps the operating frequency ranges of the low- and mid-range sections.

Sound reinforcement and concert loudspeaker systems must satisfy many performance criteria in order to provide not only high fidelity reproduction, but also a high degree of intelligibility. Control of directivity and coverage is

1 Installed Sound Technical Guide TA-7. Control of Lower-Midrange Version Directivity in Sound April, 2002. reinforcement Loudspeakers Using Crossover Overlap Techniques Summary Sound reinforcement and concert loudspeaker systems must satisfy many performance criteria in order to provide not only high fidelity reproduction, but also a high degree of intelligibility. Control of directivity and coverage is an integral and important part of the design of these systems in attaining their performance goals. This paper describes a technique to increase the lower-midrange directivity and decrease the vertical beamwidth of large Sound reinforcement speaker systems through crossover overlap. Rather than operate the individual low-, mid-, and high-range sections of the speaker independently in their own frequency bands, the new technique overlaps the operating frequency ranges of the low- and mid-range sections.

2 This overlap increases the effective vertical source height of the system , thus decreasing vertical coverage, and raising directivity in the upper bass and lower midrange. Proper implementation of the overlap requires an electronic crossover/processor with all-pass filter capability that allows manipulation of phase independent of signal magnitude. Introduction Concert and Sound reinforcement speaker systems must satisfy many performance goals including high-fidelity reproduction, high intelligibility, being able to play loud and clean, providing even coverage of the audience area, and high reliability. Of all these performance goals, one of the most important is the coverage pattern of the loudspeaker . Ideally the system should provide good even coverage of the audience area, but with minimal coverage of other areas such as reflecting surfaces where the listeners are not located. Coverage of the audience only and not other areas, is very important in reverberant environments to maximize intelligibility and to extend the operating reach of a system .

3 Lower-Midrange Directivity Control / Crossover Overlap Techniques page 2. Typically, concert speaker arrays are made up of individual multi-way full- range systems, rather than individual clusters of like-frequency-range components such as high-frequency horns or midrange horns. When these full-range systems are used in smaller arrays or individually, it is very important that the individual systems provide high directivity on its own and not depend on the additive coverage of adjacent units. Often, the multi- way full-range systems are composed of relatively small individual sections that cannot provide proper coverage on their own. This is particularly true for the midrange horn where its limited size precludes it from having sufficient directivity and vertical coverage control at the low end of its operating range. A method of overlapping the frequency ranges of the woofer and midrange sections of a three-way system , is described here, that significantly raises upper bass and lower midrange directivity and decreases vertical beamwidth.

4 This directivity increase much improves the lower midrange punch and intelligibility of the system in reverberant and semi-reverberant environments. Increasing or maintaining a higher level of directionality over a wider bandwidth will raise the ratio of direct-to-reflected energy in a reverberant environment, thereby increasing system intelligibility. Coverage Control It is quite simple to produce a device that is very directional over a limited frequency range. A horn's ability to control, or direct, a radiated pattern is one of the principle reasons horns still enjoy such widespread use. Unfortunately, any acoustical device begins loosing its ability to control its radiated energy when the radiated wavelengths become long compared to the dimensions of the device. For horns, this occurs when the wavelengths become long compared to the height or width of the horn mouth. Unfortunately, horn mouth size grows even larger for a given lower frequency limit, when the desired directivity is raised (higher Q).

5 As an example, a horn-loaded speaker system is desired that will produce a uniform symmetrical pattern of 100 down to 200 Hz. The required horn mouth size would be approximately x m ( x ft) for this situation [1]. The resultant directional pattern would actually represent a very well controlled system . This is in contrast to a typical two-way Sound reinforcement system consisting of a non horn-loaded 15 woofer and a relatively small high-frequency horn, which radiates essentially omni- directional up to 200 Hz. For an even narrower pattern of 60 down to 200. Hz, the horn's size would need to be a much larger x m ( x ft.)! Electro-Voice Installed Sound Technical Guide 2002 Telex Communications, Inc. Lower-Midrange Directivity Control / Crossover Overlap Techniques page 3. Because human male vocal fundamentals extend below 100 Hz, it is very important for maximum intelligibility that pattern control extend to below this frequency.

6 Two effects occur in Sound reinforcement systems to reduce vocal recognition. First, low directivity control in the lower vocal range will produce a very poor ratio of direct-to-reflective energy. The higher the direct energy with respect to reflected energy, the higher the intelligibility. Secondly, in a live situation, poor directional control at lower frequencies will allow signals from the Sound reinforcement system to reenter the live microphone directly from the PA system (with, of course, a delay associated with the spacing from the PA system to the open microphone). The delayed signal will combine with the direct vocal signal and will be re-radiated into the reverberant environment further compounding an already difficult situation. This same energy can also produce feedback in the lower vocal range. Current Practice The current practice in performing arts centers, houses of worship, and live entertainment venues is to use medium-format three-way horn-loaded systems.

7 These high-performance systems offer excellent output capability, low distortion, and very linear response. Unfortunately, the coverage pattern of a typical individual system of this type is much too broad below 500 Hz, which results in speech intelligibility problems in reverberant environments. Typically, the radiation pattern is already 100 horizontal by 100 vertical at 500 Hz. As frequency goes down and wavelengths increase, the pattern widens even more. For a typical system with a horn-loaded mid bass with mouth dimensions of 0 5 x m (20 x 20 in.), the pattern is even wider at 200 Hz increasing to 250 by 250 . Of course, increasing the vertical dimensions of the mid-bass horn mouth will improve vertical pattern control. Unfortunately, the entire system of bass driver, mid bass, and high frequency then grows correspondingly larger. This frequently produces a system that has the advantage of improved directivity, but also has the disadvantage of being too large for the lines of sight or aesthetic considerations in the venue.

8 Typically, a venue requires wide horizontal and a narrow vertical dispersion to properly cover the audience. Many popular venues require coverage in the horizontal plane of 80 to 120 , and vertical patterns of 40 to 60 . This restricted vertical pattern will provide proper audience coverage and will limit ceiling reflections, plus will minimize spill directed beneath the speaker towards the performing area. Electro-Voice Installed Sound Technical Guide 2002 Telex Communications, Inc. Lower-Midrange Directivity Control / Crossover Overlap Techniques page 4. Line Arrays and Overlapping Control of low-frequency vertical directivity can also be accomplished through the use of vertical line arrays as well as large format horns. Like a large-mouth horn, a vertical line array of sufficient dimensions can be used very successfully to extend directivity control and substantially improve overall intelligibility.

9 An overlapped combination of bass driver(s) and mid-bass horn can also be used to produce a line array. This produces a larger effective vertical- radiating dimension that extends directivity control down to lower frequencies. This technique of overlapping individual devices will not only improve directional control, but also make more effective use of the optimum performance of each device. A representative idealized crossover frequency response for a conventional non-overlapped three-way concert system is shown in Fig. 1. The crossover is a conventional design where the bass to mid-bass (or midrange) crossover occurs at 125 Hz, and the mid-bass to high-frequency transition is at kHz. With the typical x m (20 x 20 in.) mid-bass horn mentioned previously and this crossover, this system would exhibit unacceptably broad coverage below 500 Hz. It simply looses its ability to control directivity when the wavelengths become longer than the radiating dimensions.

10 The system of Fig. 1 can be converted to a version that has much improved upper-bass and lower-midrange coverage control by overlapping the responses of the bass and midrange sections. This is accomplished by operating the system 's woofer higher in frequency so that its response overlaps the bottom part of the mid-bass (or midrange) response. This lets the system 's woofer operate higher in frequency than it would normally in a conventional crossover configuration. The three-way crossover of Fig. 1 can be modified to include the overlap between the bass and midrange. The idealized response of the modified crossover is shown in Fig. 2. In this situation, the bass driver operates from 30 Hz up to 540 Hz and overlaps the midrange section from 125 to 540. Hz. The 6-dB shelf between 125 Hz and 540 Hz is required so that the overlapped drivers sum acoustically to the same reference level as the rest of the system . 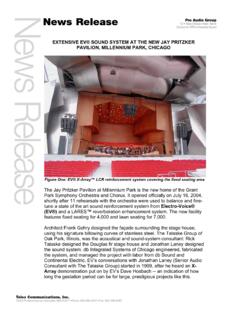 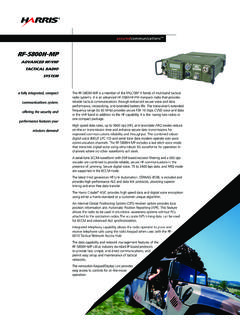 The RF-5800H-MP is a member of the FALCON® II family of multiband tactical radio systems. It is an advanced HF-SSB/VHF-FM manpack radio that provides reliable tactical communications through enhanced secure voice and data 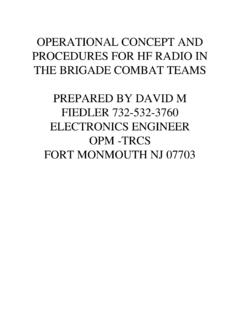 OPERATIONAL CONCEPT AND PROCEDURES FOR … 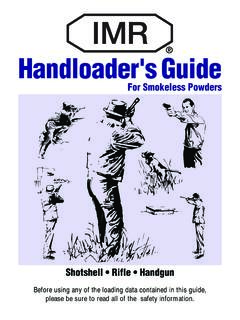 Handloader's Guide For Smokeless Powders Shotshell • Rifle • Handgun Before using any of the loading data contained in this guide, please be sure to read … 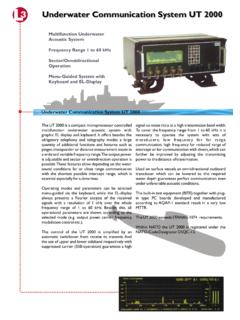 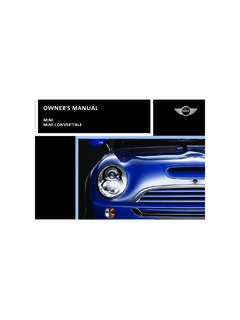 CONGRATULATIONS ON YOUR NEW MINI This Owner's Manual should be considered a permanen t part ... Warranty and Service Guide … 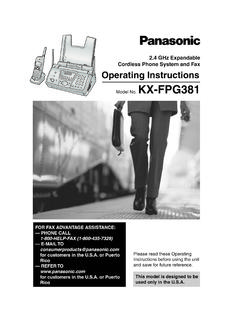 2 Thank you for purchasing a Panasonic fax machine. Things you should keep a record of Attach your sales receipt here. For your future reference Caution: 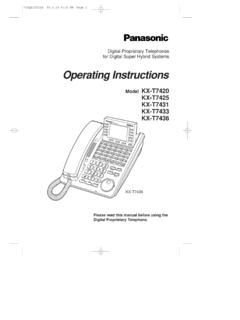 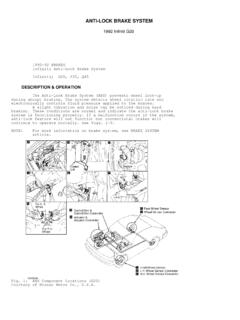 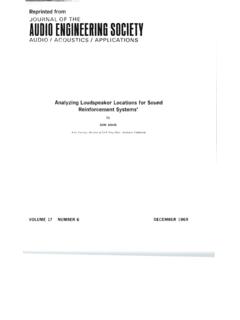 JOURNAL OF THE AUDIO ENGINEERING SOCIETY 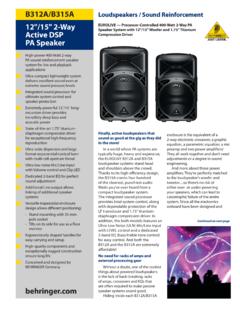 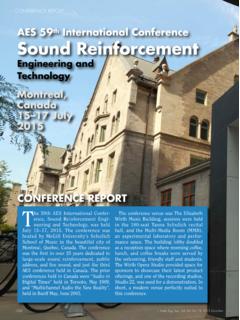 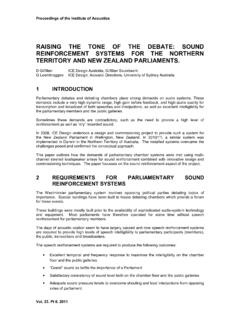 RAISING THE TONE OF THE DEBATE: SOUND …

Proceedings of the Institute of Acoustics Vol. 33. Pt 6. 2011 RAISING THE TONE OF THE DEBATE: SOUND REINFORCEMENT SYSTEMS FOR THE NORTHERN 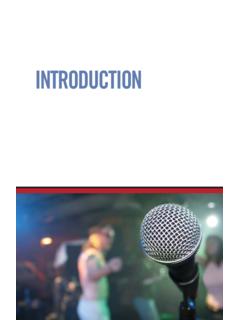 Shure Introduction to Recording and Sound … 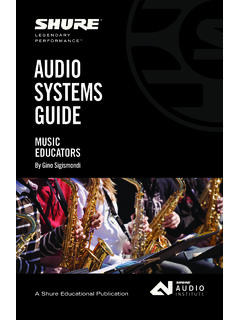 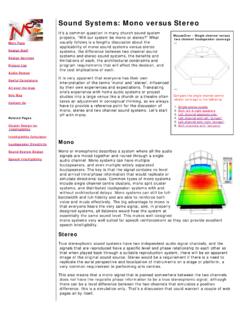 Sound Systems: Mono versus Stereo - US …

Loudspeaker Directivity Sound System Design Speech Intelligibility Sound Systems: Mono versus Stereo It's a common question in many church sound system projects, "Will our system be mono or stereo?" What usually follows is a lengthy discussion about the applicability of mono sound systems versus stereo systems, the difference between two channel sound systems and stereo sound systems… 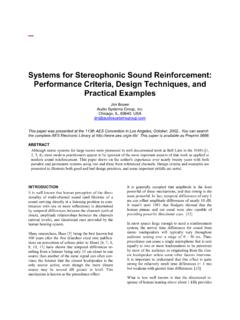 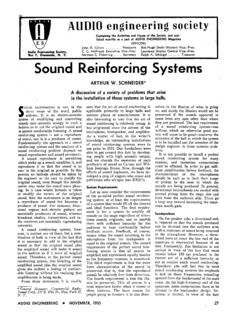 AUDIO engineering society Containing the Activities and of the Society, and pub- Sound Reinforcing Systems ARTHUR W. SCHNEIDER* A discussion of a …