3 During the 2016 First Extraordinary Session, the Legislature Act 1 (enacted 4 March 2016) reversed the 72% limitation approved and the Governor signed a number of bills that imposed during the 2015 session by making dividend income implemented business and individual tax increases to help received from Louisiana banking corporations, national close the State 's budget gap. The following is a brief summary banking corporations doing business in Louisiana and capital of these franchise and corporate income tax law changes. stock associations whose stock is subject to ad valorem Act 12 (enacted 10 March 2016) effectively and prospectively taxation exempt from corporate income tax.

4 This change reverses the Louisiana appeals court ruling in UTELCOM,1 applies to exclusions claimed on any return led for any by expanding the incidents of taxation to include the owning taxable year beginning on or after 1 January 2015. Other or using of any part or all of certain entities' capital, plant, dividends are still subject to the 72% limitation. or other property in Louisiana whether owned directly Ernst & Young LLP's insights or indirectly through a partnership, joint venture, or any other business organization of which the domestic or foreign With many of the income tax changes becoming effective corporation is a related party.

5 Additionally, Act 12 expands retroactively to years beginning on or after 1 January 2016. the types of entities subject to franchise tax to include all or 1 January 2017, Louisiana taxpayers will not have much entities that are taxed as corporations for federal income tax time to respond to and prepare for these tax law changes purposes, but excludes from the tax limited liability companies prior to their effective dates. (LLCs) that are quali ed and eligible to make elections to These income tax changes make Louisiana's tax law even be taxed as S corporations. Act 12 also provides a holding more unique, creating additional disconnects from basic company deduction to relieve the pyramiding effects due to State tax norms and generating traps for the unwary.

6 For the expansion of taxable entities. These changes are effective example, Louisiana's new NOL ordering and priority rules for all taxable periods beginning on or after 1 January 2017. are now completely decoupled from the federal provisions, Act 6 (enacted 9 March 2016) clari es a 2015 law change do not follow the rules that either the federal government related to net operating losses (NOLs) to make clear that the or any other State use and will require taxpayers to track NOL deduction is the lesser of 72% of the NOL carryforward their NOLs in a way that is simply counterintuitive.

7 As for the year or 72% of Louisiana net income . Stated differently, such, taxpayers must carefully consider their Louisiana tax a taxpayer with current year income will be subject to tax on at posture, as generally accepted workpapers or calculation least 28% of current year income , regardless of the amount of methods that may have worked in the past or still work for total NOL carryforwards. Additionally, Act 6 removes the 2018 other states will be irrelevant for Louisiana tax purposes. sunset date, making the reduction permanent. This change Bills that were heavily considered in this First Extraordinary applies to Louisiana corporate income tax returns led on or Session, but failed to pass, including proposals to adopt a after 1 July 2015.

8 Single sales factor apportionment formula and market based Effective 1 January 2017, Act 24 (enacted 10 March 2016) sourcing for sales of services and non-tangible personal changes the ordering for the use of NOLs to require that the property, will likely be considered in future sessions. most recent or newest loss be used rst ( , last in, rst out). Act 16 (enacted 10 March 2016), effective for tax years Tennessee Supreme Court upholds tax commissioner's beginning on or after 1 January 2016, requires that use of alternative apportionment corporations add-back otherwise deductible intangible and The Tennessee Supreme Court (Court) recently issued its much interest expenses and costs and management fees directly or anticipated ruling in Vodafone,2 upholding the imposition by indirectly paid, accrued or incurred to, or in connection with the Tennessee Commissioner of Revenue (Commissioner)

9 Of one or more direct or indirect transactions, with one or more a variance requiring a multistate mobile telecommunications related members. Add back is not required if the payment is company to use an alternative apportionment method to made: (1) to a related party that is taxable in another State or source its sales receipts for services to Tennessee customers is taxable in a treaty country; (2) in an arm's-length transaction in order to more accurately re ect its business activity in the 2 | State income and franchise tax quarterly update State . The Court further held the Commissioner's variance, statutory COP method applied, the taxpayer's Tennessee which uses the primary-place-of-use (PPU) (effectively, a receipts would go untaxed, as nowhere income .)

10 The Court market based sourcing method) instead of the statutory costs found that the Commissioner's alternative method appears of performance method (COP), is not an abuse of discretion as to present no danger of double taxation, and it comports with it is within the range of acceptable alternatives available to the the overarching UDITPA goals. Accordingly, the Court found Commissioner. that the statutory requirement that the alternative formula be The Court explained that the threshold inquiry in reviewing the reasonable had been satis ed. Commissioner's decision to impose a variance is: (1) whether The Court also considered whether the variance regulation, the statutory apportionment formula fairly represents the which states that the variance statute permits a departure extent of the taxpayer's business activity in Tennessee; and from the statutory apportionment method only in limited (2) if it does not, whether the Commissioner's alternate and speci c cases, where unusual fact situations produce formula in the variance is reasonable.

The Committee that acted for the National Conference of Commissioners on Uniform State Laws in preparing the Uniform Principal and Income Act was as follows: 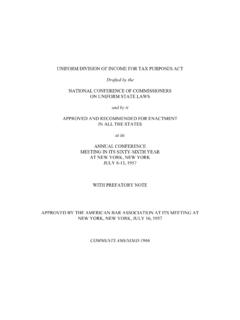 UNIFORM DIVISION OF INCOME FOR TAX … 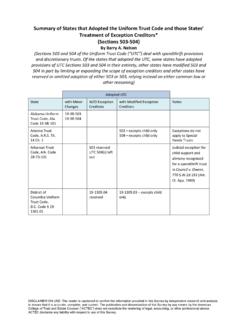 Summary of States that Adopted the Uniform Trust …

Summary of States that Adopted the Uniform Trust Code and those States’ Treatment of Exception Creditors * (Sections 503-504) By Barry A. Nelson

INCOME TAXATION OF TRUSTS AND ESTATES …