Understanding PDM Digital Audio Thomas Kite, VP Engineering Audio Precision, Inc. Table of Contents Introduction .. 3. Quick 3. PCM .. 3. Noise 4. Oversampling .. 5. PDM Microphones .. 6. DACs and PCM-to-PDM 6. PDM Modulators .. 7. Transmitting and Handling PDM Signals .. 7. Performance .. 8. Conclusion .. 9. Further Reading .. 9. Understanding PDM Digital Audio 2. Introduction PDM stands for pulse density modulation. However, it is really better summarized as oversampled 1-bit Audio , as it is nothing more than a high sampling rate, single-bit Digital system. If one increased the sample rate of Audio CDs by a large factor, and reduced the wordlength from 16 bits to 1 in a reasonable way, that would serve as the basis of a PDM system.

1 Understanding PDM Digital Audio Thomas Kite, VP Engineering Audio Precision, Inc. Table of Contents Introduction .. 3. Quick 3. PCM .. 3. Noise 4. Oversampling .. 5. PDM Microphones .. 6. DACs and PCM-to-PDM 6. PDM Modulators .. 7. Transmitting and Handling PDM Signals .. 7. Performance .. 8. Conclusion .. 9. Further Reading .. 9. Understanding PDM Digital Audio 2. Introduction PDM stands for pulse density modulation. However, it is really better summarized as oversampled 1-bit Audio , as it is nothing more than a high sampling rate, single-bit Digital system. If one increased the sample rate of Audio CDs by a large factor, and reduced the wordlength from 16 bits to 1 in a reasonable way, that would serve as the basis of a PDM system.

2 Most current Digital Audio systems use multi-bit PCM (pulse code modulation) to represent the signal. PCM has the advantage of being easy to manipulate. This allows signal processing operations to be performed on the Audio stream, such as mixing, filtering, and equalization. PDM, which uses only one bit to convey Audio , is simpler in concept and execution than PCM. It has become popular as a way to deliver Audio from microphones to the signal processor in mobile telephones. PDM is ideally suited for this task because it brings the benefits of Digital , such as low noise and freedom from interfering signals, at low cost. This document will cover the basics of PDM: how it is generated, transmitted, and manipulated.

4 Wordlength is the number of bits used to represent a sample. Quantization is a procedure for representing an arbitrary data sample using a given wordlength. Dither is a noise-like signal added before quantization to improve performance. Linearization is the process of mitigating the deleterious effects of data quantization, usually by adding dither. Noise modulation is the undesirable variation of the noise floor in a system due to the signal content. PCM. Before we tackle PDM, let's first review PCM, that is, conventional multi-bit Digital Audio . In PCM, the Audio signal is represented as a series of samples, each a fixed number of bits long.

5 Two factors determine the performance of the system: Sampling rate. This determines the bandwidth of the system. Understanding PDM Digital Audio 3. Wordlength. This determines the signal-to-noise ratio (SNR) of the system. In particular, the bandwidth is fs/2, where fs is the sampling rate, and the SNR is given by ( + ) dB, where N is the wordlength in bits. A raw 16-bit system has a theoretical SNR of around 98 dB. In practice, dither is used to linearize the system and eliminate noise modulation; this reduces the SNR by about 4 dB. Using the above formula, an undithered 1-bit system has an SNR of about 8 dB, which is of course unacceptable for any real Audio work.

6 Furthermore, optimal dither needs 2 LSBs to work; since a 1-bit system only has 1 LSB total, and that's used for the Audio , hence there is no room for dither. Since the system cannot be properly dithered, a 1-bit representation would at first blush appear to be a non-starter. The solution lies in an Understanding of noise shaping and oversampling. Noise Shaping Consider a typical PCM signal such as a 24-bit representation of a sine wave. How might this be represented in a system whose wordlength is only one bit, when such systems appear to have severe noise and distortion problems? One might start by simply throwing away all the bits except the MSB, effectively thresholding the signal around the zero point.

7 This will turn the sine wave into a square wave that switches at the zero crossings. This introduces a tremendous amount of distortion; over 40%, in fact. The distortion arises because the system is undithered. Quantization always introduces error, but in a dithered system, the error comes in the form of a white noise floor uncorrelated with the signal. In an undithered or under- dithered system, some of the error is in the form of distortion. Reducing to 1-bit by retaining the MSB is therefore not the answer. However, we are all familiar with an example of wordlength reduction to one bit that works very well. It's called halftoning, and has been the basis for reproducing images in print media since the invention of the newspaper.

8 In halftoning, a continuous-tone image (such as a grayscale photograph) is converted to a series of black dots and white spaces. In other words, the wordlength is reduced to one bit, where the state of the bit corresponds to a black dot or a white space. This is done not by simple thresholding, but rather by distributing the error caused by thresholding among neighboring pixels that have yet to be thresholded. This process is known as error diffusion. (There are many other ways to create halftones, but we won't consider them here.) The effect on image quality of diffusing the error is dramatic, as shown below. Understanding PDM Digital Audio 4.

9 Original image Thresholded image Error diffused image Why does diffusing the error incurred by thresholding result in a huge increase in the visual quality of the image? The answer is that error diffusion performs two functions. First, it transforms the distortion caused by simple thresholding into something more like a noise floor; and second, it shapes that noise floor so that the noise at low spatial frequencies is reduced, at the expense of noise at high frequencies. This matters in images because most of the image content is at low frequencies. Furthermore, high image frequencies are filtered by the fundamental resolution of the eye, so as long as the dots are small enough (or the image is sufficiently far away), a lot of the high frequency noise simply isn't visible.

10 The result is that what would have been gross distortion from thresholding becomes a fairly benign, high-pass noise floor. By fairly benign , we mean that its appearance is acceptable, although it is not a true noise floor, because the system is undithered. The noise is still correlated with the signal, and exhibits tonal behavior and other artifacts. Still, the visual results are good. Halftoning is an example of a noise-shaping system. The noise incurred by reducing the wordlength is shaped so that it is not flat, but high-pass. In general, noise-shaping systems can have any output wordlength, and there is no requirement that their noise transfer function be high-pass. 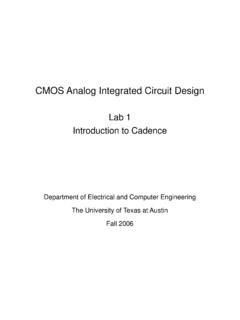 2 In this lab, the students are introduced to Cadence integrated circuit design environment, the tool set that will be extensively used in the labs of CMOS Analog Integrated Circuit Design.Main contents of 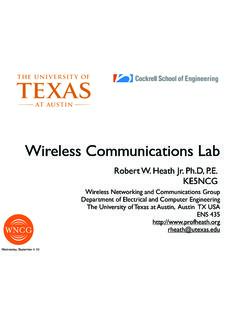 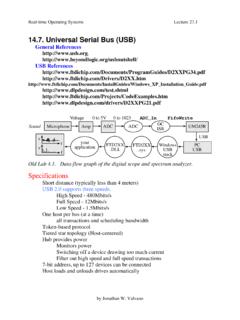 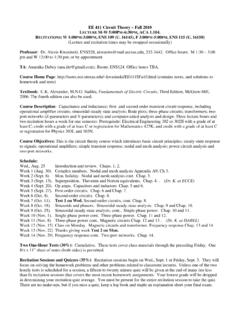 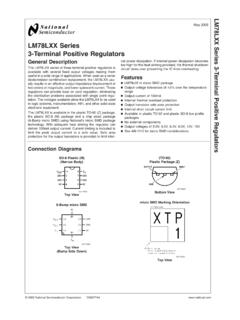 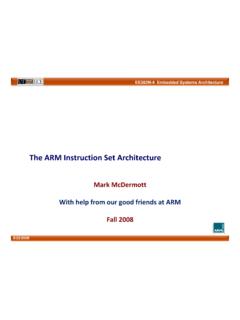 EE382N-4 Embedded Systems Architecture Main features of the ARM Instruction Set All instructions are 32 bits long. Most instructions execute in a single cycle. 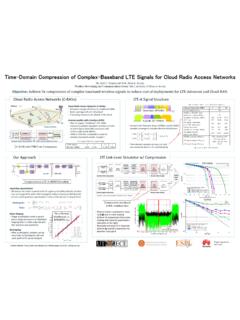 Nutshell, Lte in a nutshell 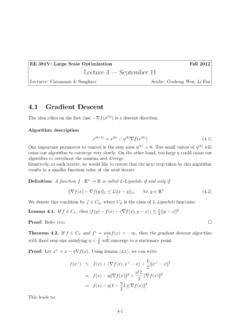 EE 381V Lecture 4 | September 11 Fall 2012 4.1.1 Strong Convexity and implications De nition: If there exist a constant m>0 such that r2f mIfor all x2S, then the function f(x) is a strongly convex function on S. 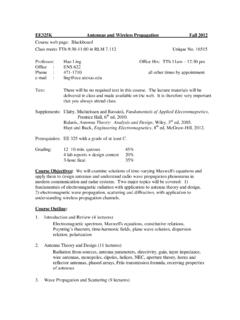 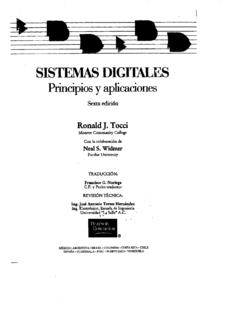 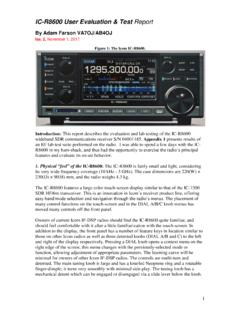 3 The FPGA also delivers a digital video signal to the Display Processor, which manages the screen displays, including the fast FFT spectrum scope and waterfall. 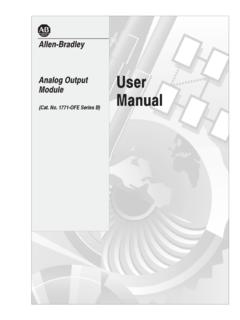 ˆ3!*(" 2(-, 7 ˘-4$+!$0 This manual shows you how to use the analog output module with an Allen-Bradley programmable controller. It describes methods for 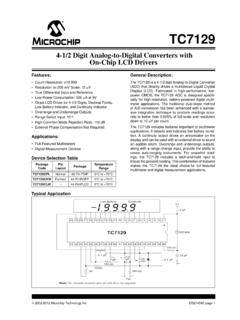 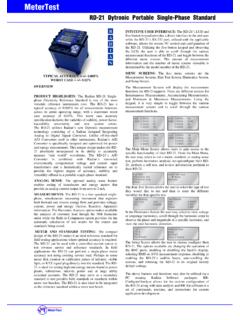