A Beginners Guide to Contract Bridge

1 Introduction Contract bridge is a four-handed trick-taking card game played with a stan-dard 52-card deck between two cooperative partnerships, each consisting of

3 13 Responding to Stayman .. 27. 5. 1 introduction Contract Bridge is a four-handed trick-taking card game played with a stan- dard 52-card deck between two cooperative partnerships, each consisting of two players who sit opposite one and other. The goal of the game is sim- ple: win as many tricks for your side as possible in each hand. There are various ways of keeping score depending on how many players are competing but techniques and strategies involved in the play of the hand are largely independent of the scoring method. Beginning a New Hand The dealer deals out the entires deck, one card at a time, beginning with his left-hand opponent (LHO), then his partner, then hi right-hand opponent (RHO), and finally himself. Players arrange their cards as they see fit (we recommend the player sort his hand by suits (club, diamonds, hearts, then spades left to right) and then by rank (deuce (low) through ace (high)) and wait for the dealer to make the first call.)

5 , bid of seven no trump, double, redouble. Whether or not the bid is legal is determined by the previous bids that have or have not been made. The bidding ends after three consecutive passes, or, one side bids seven no trump. The contact is thus set and is the last non-pass call made. Legal Calls Before we discuss what conditions must be satisfied for a call to be legal, we must discuss the ranking of the suits. Each suit is given a rank which is determined by alphabetical order, thus, clubs is the lowest ranking suit, next is diamonds, third is hearts, and the highest ranking suit is spades. < < < . In the prior section, we mentioned that one possible call was no trump . This call indicates the hand will be played without a trump suit. For the sake of bidding, no trump (NT) is the highest ranking suit: even higher than spades.

6 < < < < NT. If the call belongs to the following subset of calls, we call it a bid : bid of one club, bid of one diamond, bid of one heart, bid of one spade, bid of one no trump, bid of two clubs, .. , bid of seven no trump. For a bid to be legal, it must be at a higher level than all previous bids. Since the declarer is the first to make a call, he may choose from any of the calls that make up the bids. Suppose, for example, South, the dealer, bids 1 . It now becomes West's turn to make a call. If West wishes to make a bid in clubs, he must bid 2 . because the diamond suit outranks the club suit. On the other hand, if West wishes to bid a heart or spade suit, he may do so at the one-level via 1 or 1 , respectively. As another example, if South had opened the bidding with 7. 1 NT, then the lowest legal bid any player could make after South would be 2.

7 This covers all bids: a bid is legal if and only if all bids prior to it are of a lower After removing the bids from the set of calls, there are only three calls left: pass, double, and redouble. A call of pass is what it sounds like, you pass your opportunity to compete in that round of the auction. It does not imply you must pass for the rest of the auction: just that one turn. A pass is always a legal call. A call of double is a defensive bid. Suppose your LHO has bid 4 and you hold the AKQ of hearts. You may not believe your opponents will be able to make their Contract . A call of double means that if your opponents do not make their Contract , the penalty for failing to make is doubled. Alternatively, if your opponents do make their Contract , their score is doubled for doing so. A double (indicated by X, 1 4 X) is legal if and only if the last bid (note we use the term bid and not call) was made by one of your opponents.

8 In other words, you are not permitted to double your own bid or your partner's bid: you must only double your opponents. Suppose, for example, South, your partner, passes and West bids 1 . Now, as North, you can legally double. Further, if South, your partner, opens with 2 NT and West overcalls with 3 you, as North, may legally double. However, if the bidding had gone 1 from South (still your partner) and pass from West, you may not double, since the last bid was made by your partner. Finally, suppose you are South, and as dealer you pass, West bids 3 NT, North passes, and East passes. You would be allowed to double because the last bid was made by an opponent. A call of redouble is an aggressive bid for sure. Just as it sounds, it redoubles the penalty (or reward) for failing to make (or making) the Contract .

10 A redouble is indicated by XX as in 1 4 X . XX . Meaning of Bids We have discussed the order in which the auction proceeds and we have discussed how to make a legal call, but we not made mention of what any of these bids actually mean. First note that since the entire deck is split evenly between four players, there are thirteen total tricks. If the bidding were to start with I can win one trick with spades as trumps the bidding would take so long that the partnerships would essentially be able to reveal the contents of their entire hand to one and other and thus always arrive at the perfect Contract with little skill involved. Thus, the bidding begins at one trick above book. Book refers to the first six tricks. Thus, a bid of one clubs means I can make one trick above book with clubs as trumps . In other words: I can win seven tricks total with clubs as trumps. 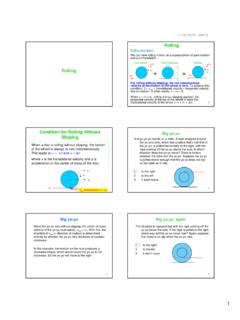 2. 7. Analyzing the yo-yo. The key to determining which way the yo-yo moves is to look at the torque due to the tension about the point of contact. All the 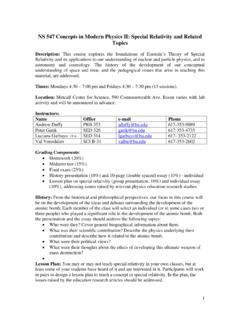 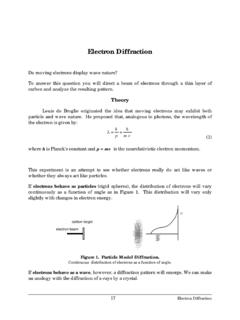 Electron Diffraction Do moving electrons display wave nature? To answer this question you will direct a beam of electrons through a thin layer of 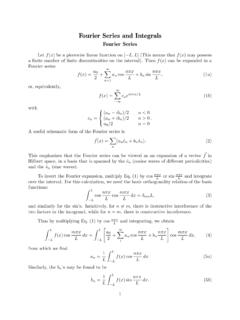 FourierSeriesandIntegrals FourierSeries Let f(x) be a piecewise linear function on [−L,L] (This means that f(x) may possess a ﬁnite number of ﬁnite discontinuities on the interval). 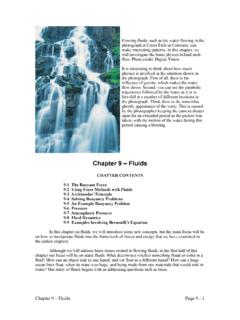 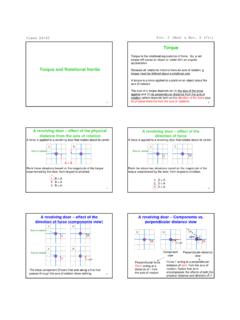 1 Torque and Rotational Inertia 2 Torque Torque is the rotational equivalence of force. So, a net torque will cause an object to rotate with an angular 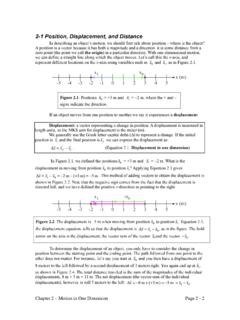 EXAMPLE 2.1 – Interpreting graphs Another way to represent positions and displacements is to graph the position as a function of time, as in Figure 2.4. 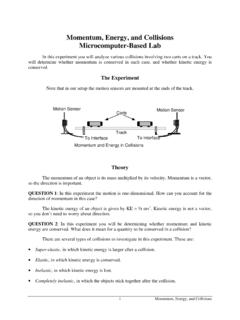 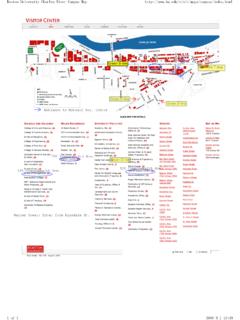 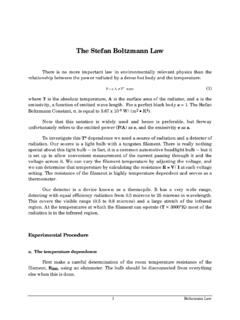 accurate operation. Be careful not to move the detector between readings. Analysis The data table is accompanied by a calculation table. For each voltage setting, calculate the filament resistance. The ratio of that resistance to room temperature resistance (R300) is the indicator of filament temperature. The calibration of this 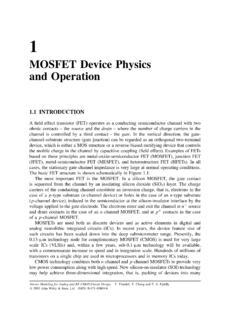 1 MOSFET Device Physics and Operation 1.1 INTRODUCTION A ﬁeld effect transistor (FET) operates as a conducting semiconductor channel with two ohmic contacts – the source and the drain – where the number of charge carriers in the channel is controlled by a third contact – the gate.In the vertical direction, the gate- 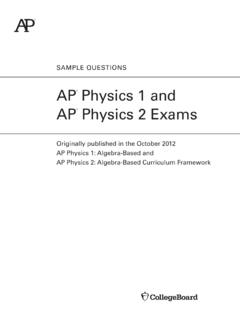 AP Physics 1: Algebra-Based Sample Exam Questions Sample Multiple-Choice Questions RR 1. Two solid spheres of radius R made of the same type of steel are placed in contact, as shown in the figures above. The magnitude of the gravitational force that they exert on each other is F 1 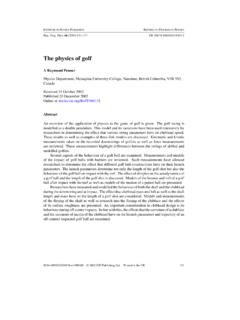 The physics of golf - raypenner.com

The physics of golf 133 1. Introduction The game of golf, in one form or another, has been around for over ﬁve hundred years. It can be assumed that even during the very early stages of the game, players, especially those

Contents at a Glance Introduction.....1 Part I: Putting Physics into Motion.....5 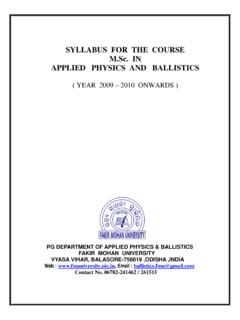 SYLLABUS FOR THE COURSE M.Sc. IN APPLIED …