Forms of Business and the Texas Franchise Tax

A Study by the TTARA Research Foundation Forms of Business and the Texas Franchise Tax TTA RA. 400 West 15 th Street, Suite 400. Austin, Texas 78749. (512) 472-3127. (512) 472-2636 (fax). email : ttara@ttara .org FbRhfS OF BU,SII~'ESSAND THE STUD "grT&'E A", ' -Wk EAR -KF&Nn4rioN. s. RANCHISE :T. EXECUTIVE SUMMARY : Forms OF Business AND THE. Texas Franchise TAX. Since the Select Committee on Tax Equity first raised the issue that increasing amounts of Business activity in Texas was being conducted in non-corporate entities, the relationship between Business "form" and the state's tax system has been a subject of considerable debate, but not much study . This report attempts to remedy that situation . Modern businesses have many choices in how they structure their operations and how they organize different parts of their operations.

1 A Study by the TTARA Research Foundation Forms of Business and the Texas Franchise Tax TTA RA. 400 West 15 th Street, Suite 400. Austin, Texas 78749. (512) 472-3127. (512) 472-2636 (fax). email : ttara@ttara .org FbRhfS OF BU,SII~'ESSAND THE STUD "grT&'E A", ' -Wk EAR -KF&Nn4rioN. s. RANCHISE :T. EXECUTIVE SUMMARY : Forms OF Business AND THE. Texas Franchise TAX. Since the Select Committee on Tax Equity first raised the issue that increasing amounts of Business activity in Texas was being conducted in non-corporate entities, the relationship between Business "form" and the state's tax system has been a subject of considerable debate, but not much study . This report attempts to remedy that situation . Modern businesses have many choices in how they structure their operations and how they organize different parts of their operations.

2 A Business today is likely to appear to the outside world like a single entity, but behind the front door, it is common to find a collection of separately organized entities that perform different parts of the company's Business . While this separation into distinct legal segments used to be almost exclusively in the domain of the largest businesses, changes in legal and accounting practices have made it possible, if not likely, that most businesses that have grown beyond the single, sole proprietor level to use separate legal entities to provide flexibility of operations and protection from liability . The legal " Forms " that businesses use to conduct their operations are mainly created under state laws . The oldest Forms , sole proprietorships and general partnerships, are really common law entities that are indistinguishable from the individuals that make them up.

3 Newer Forms , like corporations, limited partnerships, professional associations and limited liability companies, were created by state legislatures to provide structures to govern the conduct of Business affairs that are treated as separate entities, apart from their owners . The advantage of having Business Forms that were distinct from their owners was that it allowed for accumulation of capital and the separation of the Business 's liabilities from those of the owners . It also allowed for easier transfer of ownership interests, through stock sales for instance, and for the creation of businesses with "perpetual" lives . As the number and variety of these newer Forms grew, people that joined together to conduct " Business " (an activity engaged in with the expectation of making a profit) had an increasing number of choices of Forms available to them.

4 The different organizational Forms of Business are subject to different administrative, legal and tax requirements . Obviously, since the point of doing Business was to make a profit (have something left PAGEi over for the owners), the effect of taxes on the Forms and methods of operating the Business is also significant . Tax considerations enter into decisions on how to structure and organize the individual units of a Business , but they are typically intertwined with a number of other issues, such as whether to place different parts of an operation in separate legal entities (such as using subsidiaries) to limit their exposure to particular risks, whether to locate certain operations close to their customers or suppliers, whether there are historical or regulatory reasons to keep certain operations distinct from others, and even in which state to formally organize the Business .

6 The different types of partnerships provide varying degrees of legal liability protection and require varying degrees of formality . The simplest form, the common law "general" partnership, requires no formal partnership agreement and, like the sole proprietorship, is essentially indistinguishable from the individual partners . At the other extreme, a limited liability limited partnership requires a formal partnership agreement that is filed with the state and provides protections just slightly less extensive than a corporation . Members of a partnership can be individuals, other partnerships, limited liability companies, or even corporations . Corporations were long a preferred Business form because they were the first form that was legally distinct from its owners.

7 In a corporation, capital can be raised very efficiently through the sale of shares of stock, and the "corporate shield" protects investors' personal assets against claims on the corporation . While corporations have been the fewest in number of the various Business Forms , they traditionally have accounted for the greatest amount of Business activity . In addition to these three basic Forms , there are a number of other Forms that are used in modern Business . Various licensed professionals are allowed to form "professional associations" or "professional corporations ." These entities are both governed by the Texas Business Corporations Act . Limited liability companies have more organizational flexibility than corporations, but share much of the same liability protections.

9 Many businesses, particularly partnerships, limited liability companies, and corporations meeting certain criteria, may elect their tax treatment . They may elect to be taxed under the corporate income tax, or they may elect to be treated as a "pass-through" entity, in which the Business is not subject to direct income taxation, but instead the owners are taxed on their share of income from the Business . Only four states do not tax any form of Business income . Those are the states that have neither a Business tax nor a personal income tax that applies to Business income . All of the other states either levy a tax directly on the Business entity, regardless of its form, or follow the federal practice of allowing some entities to elect whether they will be taxed directly, or have their income "passed through" to their owners for taxation.

10 Texas takes a different approach than most states in taxing Business . With no direct tax on personal income, Texas does not tax the income earned by many "pass-through" Forms of Business at all . While sole proprietorship and partnership activity is taxed at the owner's level in most states, Texas does not levy a personal income tax, therefore the income generated by these Business Forms do not come under the state's tax umbrella, unless the partnership is owned by another taxable entity . Texas ' corporate Franchise tax, is however, broader than corporate taxes in most other states, applying to limited liability companies and S corporations-entities not typically subject to corporate taxes in other states . Further, the Franchise tax is based on the higher of two calculations-one largely based on net income and one based on net assets-so it falls more evenly on both capital- intensive and turnover-based businesses.

The Property Tax in Texas - Texas Taxpayers and … 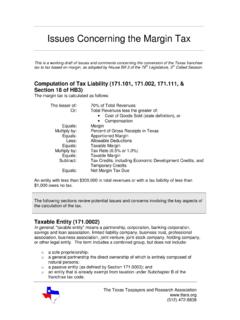 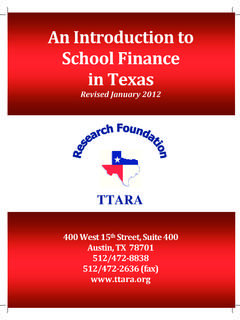 An Introduction to School Finance in Texas TTARA Research Foundation 1 Revised January 2012 Executive Summary The public education system in Texas is one of the largest in the nation, with 1,280 school districts and charter

Buyers and Sellers of an S Corporation Should …

foreign tax even if, in fact, that tax has been reduced or waived as an incentive. It is a firm element of U.S. policy that a foreign tax credit be given only for foreign income … 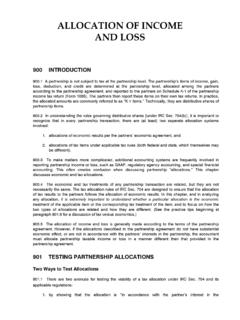 ALLOCATION OF INCOME AND LOSS - taxtaxtax.com 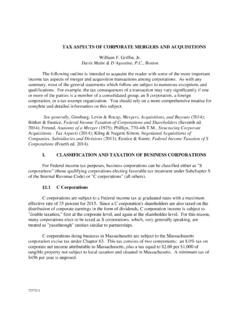 TAX ASPECTS OF CORPORATE MERGERS AND …

S corporation income is subject to a single tax at the shareholder level, with a few exceptions for former C corporations which distribute C corporation earnings and profits.

Step by step, helping you succeed in the US - EY

Viewing the US tax landscape Step by step, helping you succeed in the US | 1 In the US, responsibility for writing and approving federal tax law rests with Congress 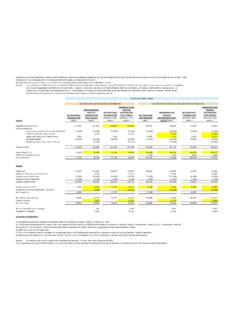 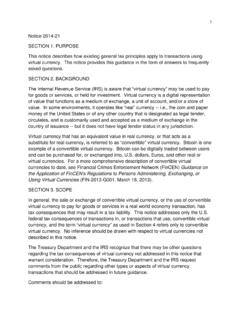 1 Notice 2014-21 . SECTION 1. PURPOSE . This notice describes how existing general tax principles apply to transactions using virtual currency. The notice provides this guidance in the form of answers to frequently 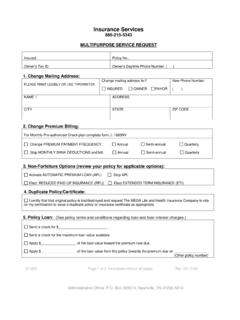