AAT is a registered charity. No. 1050724 VAT - composite supplies 1. Introduction VAT is supposed to be a tax on the final consumer. In the UK, the standard rate of VAT is 20% which on a comparison of other European states is in the middle. Hungary, for example, has the highest standard rate at 27% and Luxembourg has the lowest at 15% but every state has reduced rates and those reduced rates can make a very substantial difference to the sale price charged by the vendor. For example, it is no accident that Amazon located in Luxembourg where there is a reduced rate of 3% for downloadable material (CDs etc). This gives Amazon a substantial commercial advantage in comparison to a UK based high street supplier which must charge VAT at 20%.

AAT is a registered charity. No. 1050724 VAT - composite supplies 1. Introduction VAT is supposed to be a tax on the final consumer. In the UK, the standard rate of VAT …

1 AAT is a registered charity. No. 1050724 VAT - composite supplies 1. Introduction VAT is supposed to be a tax on the final consumer. In the UK, the standard rate of VAT is 20% which on a comparison of other European states is in the middle. Hungary, for example, has the highest standard rate at 27% and Luxembourg has the lowest at 15% but every state has reduced rates and those reduced rates can make a very substantial difference to the sale price charged by the vendor. For example, it is no accident that Amazon located in Luxembourg where there is a reduced rate of 3% for downloadable material (CDs etc). This gives Amazon a substantial commercial advantage in comparison to a UK based high street supplier which must charge VAT at 20%.

2 This podcast has been prepared on the basis of the UK legislation which is in force at 31 August 2013. In tax, the law can change with Finance Acts, Statutory instruments and decisions of precedent which includes not only decisions of the British Courts but also the European Courts. Whilst every care has been taken to ensure the accuracy of the content of this work, no responsibility for loss occasioned to any person acting or refraining from action as a result of the material in this publication can be accepted by the author, editors, publishers or AAT The views expressed are the personal views of the author and should not be taken necessarily to represent the views of AAT. Neither AAT nor the author are liable for breach of contract, negligence (including negligent misstatement) or otherwise for any loss resulting from any error, omission or inaccuracy in the information supplied, or for any loss resulting from any act done (or not done) in reliance on the information supplied.

3 VAT is a tax on transactions, so the VAT treatment of a supply can only be decided by analysing the transaction. A composite or multiple supply is a single supply with more than one component. The UK has reduced rates the most widely known being zero rating which is available on supplies defined within Schedule 8 of VATA 1994. VAT is charged at one rate on all the consideration which is determined by identifying what is the major component of the what is supplied. For example, if a newspaper which is zero rated gives its buyers a free music CD, the major component which determines the nature of the supply is the zero rated newspaper. By way of contrast, if a CD was accompanied by a booklet which commented on the CD, all would be standard rated at 20% because the principal supply is that of the CD and its electronic music content.

4 Different components may have mixed liabilities to VAT if supplied separately. The different components may be a mixture of goods and services. If a separate charge is made for part of the supply, this does not necessarily mean that there is a multiple supply. supplies should not artificially be split nor should they be artificially combined if they are really independent. 2. composite supplies and why it matters A multiple supply (also known as a combined or composite supply) involves the supply of a number of goods or services. The supplies may or may not be liable to the same VAT rate. If one of the component supplies had a zero rate and the other had a standard rate, there might be a commercial advantage to try to treat the major element of the supply as the zero rated item.

5 Individual examples need to be considered on an individual basis and as a result few of the decisions in this complex area of VAT practice establish precedent decisions. Probably the leading case is that of Card Protection Plan Ltd v C & E Commrs [1994] BVC 20 in which at p. 28, Balcombe LJ in the Court of Appeal said that whether an element is an integral part of an overall supply is necessarily a question of impression on which different minds may reach different conclusions . Travel on public transport like a train is zero rated (Schedule 8, VATA 1994). If a train business provides zero-rated travel from London to Edinburgh, it need not declare a proportion of output tax on its receipts if the journey includes a cup of coffee which if supplied separately would be standard rated.

6 The complementary cup of coffee provided to all passengers is ancillary to the travel, which is what the customer paid for. The cup of coffee (or tea) serves no other purpose than to make travelling more comfortable: it is incidental to the main supply. The same result would apply if the ticket price included a complementary meal and drink because the major component which the rail traveller is buying is the zero rated element of transport between Edinburgh and London. If the journey is on the train, say the Flying Scotsman steam engine, from Edinburgh to Birmingham and includes a five-course meal with wine and champagne, the customer probably receives two supplies : (1) zero-rated travel and (2) standard-rated catering and output tax at 20% needs to be accounted for on this catering element requiring an apportionment of the total price paid.

7 If a supply is seen as insignificant or incidental to the main supply, then for the purposes of VAT it is usually ignored the liability is fixed by the VAT rate applicable to the main supply (or supplies ). A case which clarifies the principles of identifying and dealing with VAT is Tumble Tots (UK) Ltd v R & C Commrs [2007] BVC 179. Members of a playgroup received a T-shirt (children s clothing is potentially zero rated) and a magazine (potentially zero rated) as well as the right to attend classes which would be standard rated. The Court decided that there was a single standard rated supply of the right to belong to the playgroup and the T shirt and magazine were incidental to that main supply. No one who was not in the playgroup would have bought the T shirt or magazine separately.

8 The principles which emerge from the cases are: (1) the identification of the taxable supply or supplies made as a particular transaction is, at least where it is under a contract, limited to the goods and or services provided in return for the payment; (2) prima facie every supply of a good or of a service must normally be regarded as distinct and independent; (3) nonetheless the functioning of the VAT system would be distorted if what is in substance a single service from an economic point of view was artificially split; (4) the relevant transaction must be analysed with due regard to all the circumstances in which it takes place. Over-zealous dissection and analysis of particular clauses should be avoided; (5) the essential features of the relevant transaction must be ascertained in order to determine whether the taxable person is supplying the customer with several distinct principal services or with a single one; (6) that the goods and/or services are supplied in consideration of a single price may suggest that, for VAT purposes, there is a single supply, but this is not decisive; (7) where elements of the consideration are ancillary to another element or elements identified as the principal service, there is a single VAT supply of the principal service of which the ancillary elements will be treated as part.

10 In BSkyB the company tried to apportion the subscription price between a standard rated supply of TV entertainment and a zero rated listings magazine. They failed because it was a single composite supply and the magazine was incidental to the TV entertainment subscription. But in Telewest Communications plc v C & E Commrs [2005] BVC 156 the arrangement gained by separating the zero-rated magazine from a standard-rated supply of TV services. It did this by having a separate company provide the magazine. Although the operating companies supplying the TV service collected the magazine subscriptions on behalf of that separate company, the Court of Appeal held there to be two supplies and the House of Lords refused to hear an appeal from HMRC. 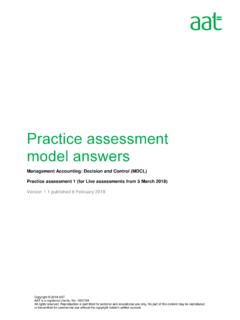 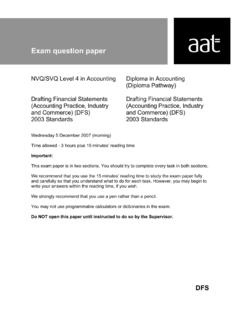 NVQ/SVQ Level 4 in Accounting Diploma in … 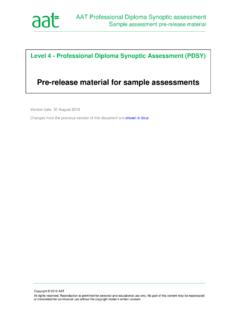 SL Products Ltd (SLP) is a market-leading manufacturing business supplying advanced technological electronics to a number of companies around the world. 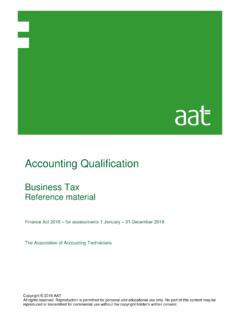 This document comprises data that you may need to consult during your Business Tax computer-based assessment. The material can be consulted during the sample and live assessments through pop-up 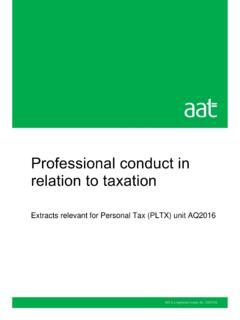 Professional conduct in relation to taxation

Copyright © 2016 AAT All rights reserved. Reproduction is permitted for personal and educational use only. No part of this content may be reproduced or transmitted for commercial use without the copyright holder’s written consent. 4 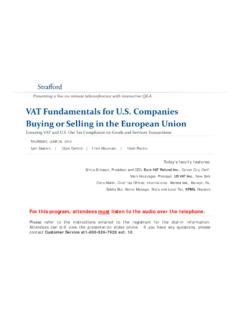 VAT for Companies or Selling in the European Union

Presenting a live 110‐minute teleconference with interactive Q&A VAT Fundamentals for U.S. Companies Buying or Selling in the European Union Ensuring VAT and U.S. Use Tax Compliance on Goods and Services Transactions

Union, European, Selling, Or selling in the european union

| 2 VAT COMPENSATION SCHEME FOR CHARITIES October 2017 Background 1. Charities are exempt from VAT under Irish and EU VAT law. This means that they do not 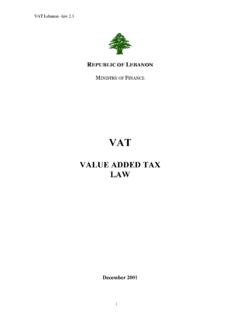 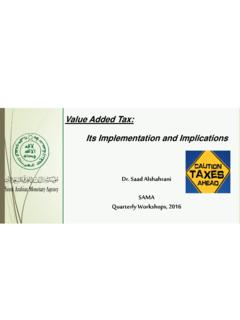 Value Added Tax: Its Implementation and … 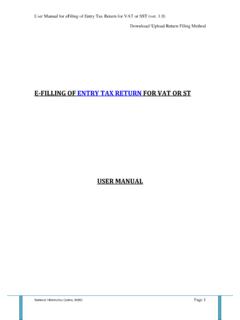 E-FILLING OF ENTRY TAX RETURN FOR VAT OR ST