2 CMP has also been utilized for fabrication and assembly of Micro Electro- Mechanical System (MEMS). In principle, CMP is a process of smoothing and planing surfaces with the combination of Chemical and Mechanical forces. It can, in a way, be thought of as a hybrid of Chemical etching and free abrasive polishing. Mechanical grinding alone may theoretically achieve Planarization but the surface damage is high as compared to CMP. Chemistry alone, on the other hand, cannot attain Planarization because most Chemical reactions are isotropic. However, the removal and Planarization mechanism is much more complicated than just considering Chemical and Mechanical effects separately. CMP makes use of the fact that high points on the wafer would be subjected to higher pressures from the pad as compared to lower points, hence, enhancing the removal rates there and achieving Planarization .

3 [1] CMP is most widely utilized in back-end IC manufacturing. In these process technology and steps thin layers of metal and dielectric materials are used in the formation of the electrical interconnections between the active components of a circuit ( transistors, as formed in the front-end processing). As shown in figure 1, the interconnect is manufactured by depositing thin films of materials, and selectively removing or changing the properties of these materials in certain areas. A new level of thin film is deposited on top of old films and the process is repeated many times until the interconnect is complete. The goal of the CMP process is to planarize step heights caused by the deposition of thin films over existing non-planar features, so that further levels may be added onto a flat surface.[2] Damascene process, as well as its upgraded generation dual-damascene, is the critical technology in the transition from aluminum to copper interconnects in semiconductor manufacturing.

4 [3] There are two primary factors driving this transition: the lower resistivity and the increased electromigration resistance that copper offers relative to aluminum. Several new materials and processes are required in this change. In the copper interconnect fabrication process, a simpler dielectric etching replaces metal-etch as the critical step that defines the width spacing of the interconnect lines, while the burden of Planarization shifts to the metal deposition and CMP steps. Figure 1 Cross-section diagram of internal dielectric on top of metal line before and after CMP (the left and the middle charts) and application of Metal 2 and ILD 2 (the right chart) Chemical Mechanical Planarization PT/01/003/JT 2 During the CMP of patterned copper wafers, two phenomena copper dishing and SiO2 erosion lead to deviations from the ideal case depicted in figure 2(a).

5 Copper dishing and SiO2 erosion occur during the over-polish step (which is required to ensure complete copper removal across the entire wafer) and are defined schematically in figure 2(b).[2] Copper dishing is defined as the difference in height between the center of the copper line the lowest point of the dish and the point where the SiO2 levels off the highest point of the SiO2. Copper dishing occurs because the polishing pad bends slightly into the recess to remove copper from within the recess. The SiO2 erosion is a thinning of the SiO2 layer resulting from the non-zero polish rate of SiO2 during over-polish step. The SiO2 erosion is defined as the difference in the SiO2 thickness before and after the polish step. Both copper dishing and SiO2 erosion are undesirable because they reduce the final thickness of the copper line; and copper dishing leads to non-planarity of the surface resulting in complications when adding multiple levels of metal.

6 CMP is also readily adaptable as an enabling technology in Micro-electro- Mechanical Systems (MEMS) fabrication, particularly polysilicon surface micromachining.[4] CMP not only eases the design and manufacturability of MEMS devices by eliminating several photolithographic and film issues generated by severe topography, but also enables far greater flexibility with process complexity and associated designs. Thus, the CMP Planarization technique alleviates processing problems associated with fabrication of multi-level polysilicon structures, eliminates design constraints linked with non-planar topography, and provides an avenue for integrating different process technologies. Examples of these enhancements include the extension of surface micromachining fabrication to multiple Mechanical layers, as illustrated in figure 3, the monolithic integration of electronics and MEMS, and the combination of bulk and surface micromachining.

7 DishingErosionSiO2Cu Figure 2 Left chart: (a) Schematic representation of copper dishing and SiO2 erosion; Right chart: (b) Profilometer trace of a 100 m line exhibiting 305nm of dishing Figure 3 Two SEM images show the surface of polysilicon before and after CMP polishing and the result of profilometer measurementChemical Mechanical Planarization PT/01/003/JT 3 2 OBJECTIVE The objective of this project is to build up the capabilities of Gintic in the CMP process. The study of the CMP process of inlaid copper structures was highlighted as the main investigation direction because of the potential of copper as the next generation interconnect material. 3 METHODOLOGY The design of experiments started with the design of a photolithography mask for the transfer of the etch pattern onto the wafers. The structural layers and fabrication procedure of the patterned wafers were also worked out and sent for fabrication by the Institute of Microelectronics.

8 Schematic cross-sectional view of test wafer is illustrated in figure 4, as well as its SEM images. Copper layer of 2~3 m is desired to fill up the trenches of SiO2. Adhesion layer under the electroplating metal is 100nm thick. The geometric design of test wafer is to investigate the dependence of the pattern density and line width versus polishing quality, ie., the dishing in copper connections and the erosion of the surrounding SiO2. The major features on the mask are lines and square arrays.[5] The CMP experiments are conducted based on Okamoto SPP-600S (as figure 5), which is an one-head machine for 8 and 6 wafers and is designed to polish semiconductor materials such as silicon, carbide, ceramics, metals and brittle materials. It consists of slurry supply system, pad surface condition detector, pad surface temperature detector and pad surface condition detector.

9 SiO2 TiCuSiSiO2 SiO2 Figure 4 Schematic diagram and SEM images of cross-sectional view of test wafer Figure 5 CMP machineChemical Mechanical Planarization PT/01/003/JT 4 A 2-Phase process is adopted in our inlaid copper pattern wafer polishing, which means changing slurry and working conditions during the copper removal process. The goal of the 1st Phase CMP is to remove copper layer with high efficiency. This phase stops at the surface of the barrier layer. Then changing the slurry and machine status to 2nd Phase for the remaining copper and barrier with removal rate at 1:1 selectivity. The most significant benefit brought by a 2-Phase process is to eliminate the excessive dishing caused by oxidants that is used for high copper removal rate. At the 2nd Phase, lower Cu/barrier selectivity slurry minimizes dishing on patterned structures as well.

10 In order to find out the average efficiency of the 1st Phase removal sequence, the thickness of the copper layer is measured after each fixed process time. CMP polishing has been performed on the patterned wafers under different head load and speed in order to characterize the polishing quality and process parameters. The surface profiles before and after CMP are fetched through profilometer and atomic force microscopy (AFM) measurement. Some CMP investigations related to the process are also conducted, polishing pad wearing and SiO2 polishing. Gold bump Planarization was conducted to explore the application of CMP into electronic packaging. The purpose is to polish the top surface of gold bumps on the silicon wafer and therefore, reduce the surface roughness of bumps in order to enhance the wafer-bumping reliability. 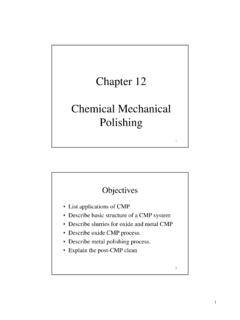 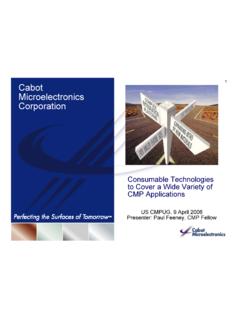 Semiconductor Manufacturing Technology 2/41 by Michael Quirk and JulianSerda Objectives After studying the material in this chapter, you will be able to: 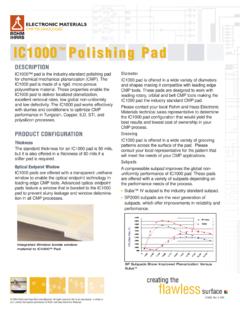 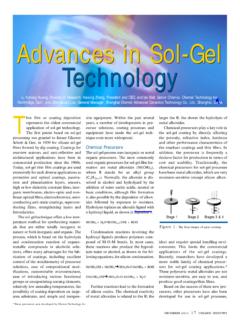 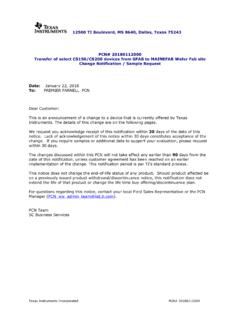 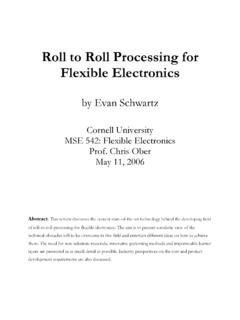 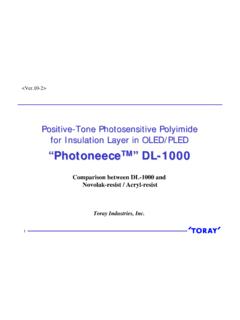