INTRODUCTION TO STORM SURGE. Introduction to Storm Surge National Hurricane Center Storm Surge Unit BOLIVAR PENINSULA IN TEXAS AFTER HURRICANE IKE (2008). What is Storm Surge? Inland Extent Storm surge can penetrate well inland from the coastline. During Hurricane Ike, the surge moved inland nearly 30 miles in some locations in southeastern Texas and southwestern Louisiana. Storm surge is an abnormal Storm tide is the water level rise of water generated by a rise during a storm due to storm, over and above the the combination of storm predicted astronomical tide. surge and the astronomical It's the change in the water level tide. that is due to the presence of the Since storm tide is the storm combination of surge and tide, it Since storm surge is a difference does require a reference level Vulnerability between water levels, it does not A 15 ft.

INTRODUCTION TO STORM SURGE 2 . Storm surge is caused primarily by the strong winds in a hurricane or tropical storm. The low pressure of the storm has minimal contribution!

1 INTRODUCTION TO STORM SURGE. Introduction to Storm Surge National Hurricane Center Storm Surge Unit BOLIVAR PENINSULA IN TEXAS AFTER HURRICANE IKE (2008). What is Storm Surge? Inland Extent Storm surge can penetrate well inland from the coastline. During Hurricane Ike, the surge moved inland nearly 30 miles in some locations in southeastern Texas and southwestern Louisiana. Storm surge is an abnormal Storm tide is the water level rise of water generated by a rise during a storm due to storm, over and above the the combination of storm predicted astronomical tide. surge and the astronomical It's the change in the water level tide. that is due to the presence of the Since storm tide is the storm combination of surge and tide, it Since storm surge is a difference does require a reference level Vulnerability between water levels, it does not A 15 ft.

2 Storm surge on top of a All locations along the East and Gulf coasts have a reference level are vulnerable to storm surge. This figure shows high tide that is 2 ft. above mean the areas that could be inundated by water in any sea level produces a 17 ft. storm given category 4 hurricane. tide. INTRODUCTION TO STORM SURGE 2. What causes Storm Surge? Storm surge is caused primarily by the strong winds in a hurricane or tropical storm. The low pressure of the storm has minimal contribution! The wind circulation around the eye of a Once the hurricane reaches shallower hurricane (left above) blows on the waters near the coast, the vertical ocean surface and produces a vertical circulation in the ocean becomes In general, storm surge occurs where disrupted by the ocean bottom.

3 The winds are blowing onshore. The highest circulation in the ocean (right above). In water can no longer go down, so it has surge tends to occur near the radius of deep water, there is nothing to disturb nowhere else to go but up and inland. maximum winds, or where the this circulation and there is very little indication of storm surge. strongest winds of the hurricane occur. The Saffir-Simpson Hurricane Wind Scale: Surge Not Included Hurricane Charley, a category 4. hurricane at landfall in Florida, produced a storm surge of 6 to 8. ft. Too many exceptions to fit the Hurricane Irene, a category 1. scale: Hurricane Ike, a category 2 at hurricane at landfall in North landfall in Texas, also produced Carolina, produced extensive Hurricane Katrina, a damage with an 8 to 11 ft.

4 Storm category 3 at landfall in catastrophic damage with a 20- ft. storm surge. surge. Louisiana, produced catastrophic damage with a 28-ft. storm surge. INTRODUCTION TO STORM SURGE 3. STORM SURGE: BEFORE AND AFTER. Hurricane Ike made landfall at Galveston, Texas, but it still produced significant coastal flooding on the north side of Lake Pontchartrain near Mandeville, Louisiana. Remarkably, the highest sustained wind reported at the lake was only 43 mph! Before Hurricane Katrina Total Water Level In reality, storm surge only makes up a part back out to sea. The water level therefore of what causes water levels to rise along the rises as a hurricane approaches, especially coast during a hurricane.

5 Here are the since the waves become larger and more others: water is pushed onshore. Wave setup caused water levels to rise along the Texas coast Tides nearly a day before Ike made landfall (below). Water levels rise and fall along the coast every day due to the gravitational pull of the moon and sun. This is the tide. In general, areas along the Gulf of Mexico, except After Hurricane Katrina Florida, experience one high and one low tide per day (diurnal tide). Elsewhere along the Images courtesy of David and Kimberly King, East Coast experience two high and two Waveland, Mississippi. low tides per day (semi-diurnal tide). FAST FACTS When the tide is combined with the storm surge, it is called the storm tide.

6 Freshwater Input Unfortunately, we can't time the arrival of a Heavy rainfall ahead of a hurricane can cause storm within the tidal cycle, so it's safer to 32%. river levels to rise well inland from the coast. assume high tide when making decisions. Once all this water flows downriver and reaches the coast, local water levels Waves especially near deltas and in bays will rise. Population density increase in coastal counties along the Breaking waves contribute to the water level Gulf of Mexico coastline from 1990 to 2008. rise through wave runup and wave setup. Wave runup occurs when a wave breaks and the water is propelled onto the beach, as in 27%. the picture below.

7 Percent of major roads in the Gulf region that are at or below 4 ft. elevation. DID YOU KNOW? On average, a major hurricane makes landfall in the Gulf Coast region once every 2 years. Total Water Level =. Galveston, TX: every 18 years Storm Surge +. New Orleans, LA: every 19 years Mobile, AL: every 23 years Tides +. Tampa, FL: every 23 years Wave setup occurs when waves continually Waves +. break onshore and the water from the runup Freshwater Input piles up along the coast because it can't get INTRODUCTION TO STORM SURGE 4. The Many Factors that Influence Storm Surge Storm Forward Speed There are several factors that contribute to On the open coast, a faster storm will Width and Slope of the the amount of surge a given storm produces produce a higher surge.

8 However, a higher Ocean Bottom at a given location: surge is produced in bays, sounds, and Higher storm surge occurs with wide, other enclosed bodies of water with a gently sloping continental shelves, while slower storm. The two images below show lower storm surge occurs with narrow, Central Pressure the surge generated by two hypothetical steeply sloping shelves. Areas along the Lower pressure will produce a higher surge. hurricanes hitting the Florida Panhandle Gulf Coast, especially Louisiana and However, as was shown on page 2, the one moving 5 mph and the other 25 mph. Mississippi, are particularly vulnerable to central pressure is a minimal contributor storm surge because the ocean floor compared to the other factors.

9 Gradually deepens offshore. Conversely, areas such as the east coast of Florida have a steeper shelf, and storm surge is not as high. Storm Intensity Stronger winds will produce a higher surge. The two images below show how much storm surge is produced by two different storms, the second one having maximum winds that are 15 mph stronger than the first. All other variable are equal. Local Features Storm surge is highly dependent on local Angle of Approach to Coast features and barriers that will affect the flow The angle at which a storm approaches a of water. A good example is the coast of coastline can affect how much surge is North Carolina, which has the complexities of generated.

10 A storm that moves onshore such features as barrier islands, inlets, perpendicular to the coast is more likely to sounds, bays, and rivers. produce a higher storm surge than a storm that moves parallel to the coast or moves inland at an oblique angle. Shape of the Coastline Size Storm surge will be higher when a hurricane A larger storm will produce higher surge. makes landfall on a concave coastline There are two reasons for this. First, the (curved inward, such as Apalachee Bay in winds in a larger storm are pushing on a Florida) as opposed to a convex coastline larger area of the ocean. Second, the strong (curved outward, such as the Outer Banks of winds in a larger storm will tend to affect an North Carolina). 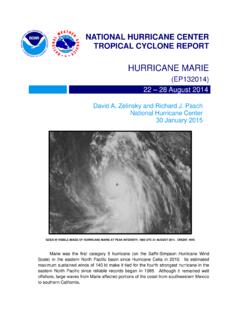 Marie was the first category 5 hurricane in the eastern North Pacific basin since Hurricane Celia in 2010. Aside from a trochoidal wobble on 24 August, Marie moved on a fairly consistent west- 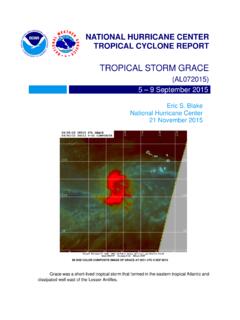 Grace was a short -lived tropical storm that formed in the eastern tropical Atlantic and dissipated well east of the Lesser Antilles. 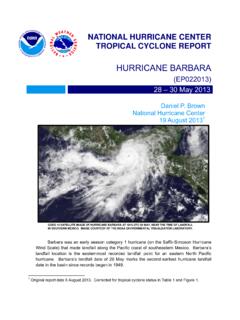 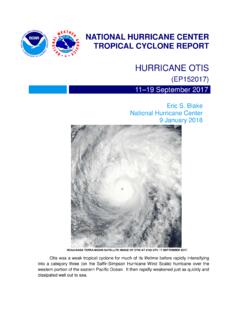 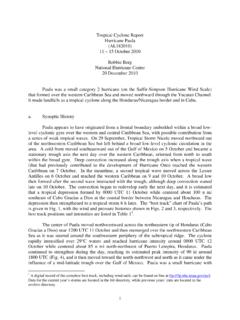 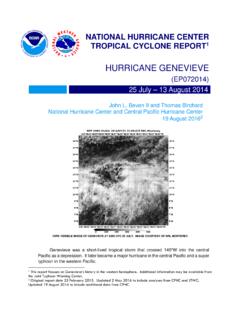 Genevieve was a -lived shorttropical storm that crossed °W into the central 140 Pacific as a depression. It later became a major hurricane in the central Pacific and a s uper 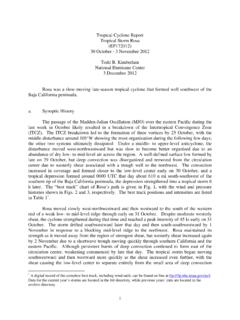 Rosa was a slow-moving late-season tropical cyclone that formed well southwest of the Baja California peninsula. a. Synoptic History The passage of the Madden-Julian Oscillation (MJO) over the eastern Pacific during the last week in October likely resulted in a … 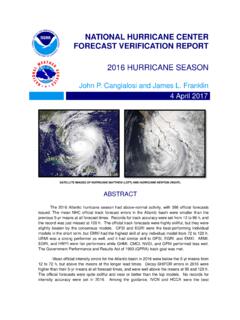 very skillful, but were slightly outperformed by TVCE. Regarding intensity, the official forecasts have been performing better than all of the guidance during the 2014- 16 period from 12 to 48 h, but 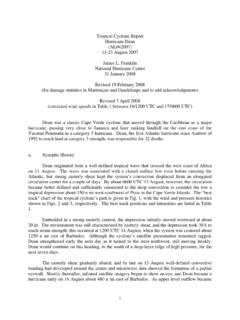 Hurricane Dean (AL042007) 13-23 August 2007 . James L. Franklin . National Hurricane Center ... passing very close to Jamaica and later making landfall on the east coast of the ... Atlantic hurricane since Andrew of 1992 to reach land at category 5 strength, was responsible for 32 deaths. a. Synoptic History . Dean originated from a well ... 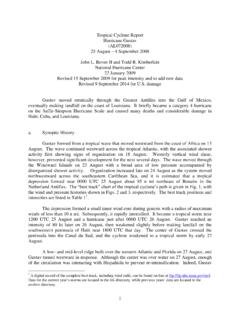 In Jamaica, the lowest observed pressure was 988.7 mb at an amateur radio station in Stoney Hill. Gustav likely caused a significant storm surge in western Cuba. 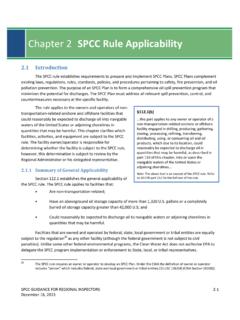 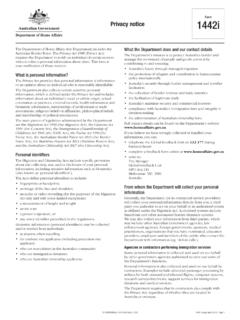 1442i (Design date 08/19) - Page 2 AT ATAIA, 2019. Collection of your personal information that is required or authorised by law. The Migration Act, the IGOC Act, the Customs Act, the Excise 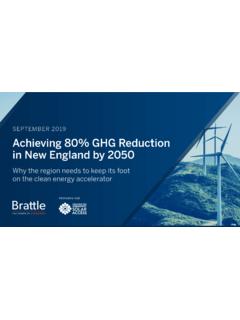 Brattle A portfolio of 160 GW clean energy resources by 2050 with an average life of 20 years means a “steady state” industry that would replace about 8 GW of capacity a year, or 10 times the annual installations planned for the next decade 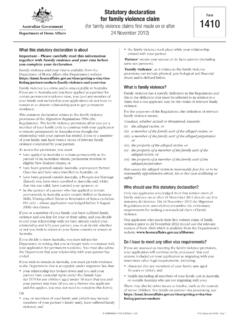 SPCC GUIDANCE FOR REGIONAL INSPECTORS 4-1 December 16, 2013 Chapter 4 Secondary Containment and Impracticability 4.1 Introduction The purpose of the SPCC rule is to prevent discharges of oil into navigable waters of the United States

ii Cover: Reflectivity image from the WSR-88D located at the Weather Forecast Office in Tampa, FL taken at 1956 UTC, August 13, 2004 as Hurricane Charley made landfall.

Oil and gas taxation in Norway - Deloitte US

Oil and gas taxation in Tanzania Deloitte taxation and investment guides 3 Moreover, companies may claim an annual cash refund of the tax value of direct and indirect exploration costs under