A CirCuit for All SeASonSBehzad Razavi IEEE SOLID-STATE CIRCUITS MAGAZINE Summer 2016 9 SSince its inception in the late 1960s, the Bandgap circuit has served as an essential component in most inte-grated circuits. This simple, robust idea provides a temperature-indepen-dent (TI) voltage and a proportional-to-absolute-temperature (PTAT) current. In this article, we study the principles of Bandgap circuit Brief HistorySemiconductor technology does not directly offer any electric quantity that is nominally independent of the ambi-ent temperature. Thus, temperature independence has generally been envi-sioned in the form of combining two phenomena that have opposite tem-perature coefficients (TCs).

Low-Voltage Bandgap References The basic bandgap expression, VV BE +17.,2 T takes on a value of about 1.25 V at T = 300K, defying direct implementation in today’s low-voltage technologies. We describe one low-voltage example and refer the reader to [10] and [11] for others. For a low-voltage bandgap reference to have a zero TC, it must produce an

1 A CirCuit for All SeASonSBehzad Razavi IEEE SOLID-STATE CIRCUITS MAGAZINE Summer 2016 9 SSince its inception in the late 1960s, the Bandgap circuit has served as an essential component in most inte-grated circuits. This simple, robust idea provides a temperature-indepen-dent (TI) voltage and a proportional-to-absolute-temperature (PTAT) current. In this article, we study the principles of Bandgap circuit Brief HistorySemiconductor technology does not directly offer any electric quantity that is nominally independent of the ambi-ent temperature. Thus, temperature independence has generally been envi-sioned in the form of combining two phenomena that have opposite tem-perature coefficients (TCs).

2 For exam-ple, a resistor with a low TC can be constructed by placing in series, with proper weighting factors, a positive-TC resistor and a negative-TC this idea to voltage quan-tities proved more difficult. It had been long recognized that the voltage across a forward-biased diode has a negative TC (if its bias current does not change much with temperature). However, a positive-TC voltage was missing. In 1964, Hilbiber of Fairchild Semiconductor observed that two di-ode stacks biased at different current densities can provide a TI voltage [1]. In 1965, Widlar, from the same com-pany, more explicitly showed that the base-emitter voltages of two transis-tors biased at different current densi-ties had a PTAT difference [2] and in 1971 introduced the first Bandgap circuit (Figure 1) [3]. This was fol-lowed by another topology presented by Brokaw in 1974 (Figure 2) [4] and many others rise of CMOS technology in the 1970s posed the question of whether a stable volt-age Reference could be created without the use of bipolar devices [5].

4 As shown in Figure 4, we bias two identical diode-connected bipolar transistors at differ-ent current levels, obtaining different current densities and VVV12 BEBED=- (2) lnlnVInIVIITSTS00=- (3) .lnVnT= (4)The same result holds if the bias cur-rents are equal but ,InISS21= , if Q2 consists of n parallel units, each identical to .Q1 We postulate that lnVVVnREFBET=+ (5)can have a zero TC if n is chosen prop-erly. That is, we must calculate the necessary value of n and find a circuit that adds VBE and .lnVnT The tem-perature coefficient of VD is equal to (/).lnlnkqnn0 087mV/K.+=+ To reach + mV/K, we require lnn..172 and, therefore, ,295107# an impractically large scaling factor for the bias currents or the term Bandgap Reference can be appreciated by calculating /VTREF22 from (5), setting it to zero, finding lnVnT from the result, and substitut-ing in (5) ().

7 Third, the op amp offset is amplified by a factor of /RR123+ as it appears in t,Vou causing error and temperature drift. For example, n10= translates to /..RR17523.+To address these issues, we first recognize that resistors R1 and R2 in Figure 5 provide equal bias cur-rents, a function that can be real-ized by controlled current sources. In the spirit of Figure 3, we arrive at the topology depicted in Fig-ure 6(a). If M1 and M2 are identi-cal, then lnVVVnT12 BEBE-= and (/).lnVVRRVn1T232outBE=++ T he bipolar transistors are implemented as vertical pnp structures. As with Figure 3, resistor RR22=l can be inserted to ensure ,VV12 DSDS= sup-pressing current mismatch due to channel-length op amp offset is still ampli-fied by a factor of /.RR123+ This issue is ameliorated by choosing a large n, say, 20 30, and/or establish-ing a nonunity ratio between IE1 and.

8 IE2 Specifically, if (/)(/),WLmWL12= the bipolar transistor current den-sities differ by another factor of m, leading to()().lnVVRRVnm1T322outBE=++ (11)For example, with n20= and ,m5= we require /..RR13723.+ This means that the designer must still pay close attention to the op amp s simple and robust, the band-gap Reference in Figure 6(a) suffers from several undesirable effects: 1) the output tends to contain sub-stantial flicker (and thermal) noise con-tribution from the op amp and M1 and ,M2 2) the circuit potentially exhibits poor supply rejection, especially due to that of the op amp, 3) if driving a heavy load capacitance at the output, the circuit can become unstable, es-pecially in cases where A1 itself contains more than one stage, and 4) if the op amp begins with a high output level at power-up, the two branches may remain off indefinitely. The remedies include the use of large MOS transistors to address the first issue, the choice of an op amp topology for high supply rejec-tion for the second issue, and adding a start-up circuit to deal with the third.

9 As shown in Figure 6(b), a weak ad-ditional branch creates a large initial imbalance at the input of the op amp, forcing its output to go low. After the circuit turns on and reaches the desired operating point, M3 and M4 turn Bandgap ReferencesThe basic Bandgap expression, .,VV172 TBE+ takes on a value of about V at ,T300K= defying direct implementation in today s low- voltage technologies. We describe one low- voltage example and refer the reader to [10] and [11] for a low- voltage Bandgap Reference to have a zero TC, it must produce an output of the form (.),VV172 TBEa+ where 11a is a scaling factor. For example, beginning with the branch shown in Figure 7(a) and writing t,VVRI413ouBE=+ where I1 is a PTAT current, we observe that t/VTou22 can be zero but tVou is still around V. How do we create a fraction of this value without first generating such a high voltage ? Let us tie a resistor from the output node to ground [Fig-ure 7(b)], surmising that the resulting voltage division creates a zero-TC output with a smaller magnitude.

10 Since tt()//,VVRVRI4513ouBEou-+= we have (),VRRRRIV545413outBE=++ (12)concluding that the output can be arbitrarily small and have a zero TC. We now derive the PTAT current, ,I1 from the circuit of Figure 6(a) and arrive at the topology shown in Fig-ure 7(c) [12]. With a voltage drop of lnVnT across ,R3 we have t(),lnVRRRVRRVnT545343ouBE=++ (13)where the MOSFETs are assum ed XY+ X(a)(b)Figure 6: (a) A CMoS Bandgap circuit and (b) a start-up +AnA(a)(b)(c)Figure 7: (a) A single branch generating a ti voltage , (b) the use of voltage division to lower the output, and (c) a complete low- voltage this article, we study the principles of Bandgap circuit Summer 2016 IEEE SOLID-STATE CIRCUITS MAGAZINE This circuit requires a minimum supply voltage equal to ,VV11 BEDS+ which amounts to 700 800 mV, pro-vided that the op amp does not pose a higher limit. If technology scaling continues to reduce ,VDD we may, in the future, resort to voltage doublers so as to accommodate the unscalable ,VBE or exploit the exponential charac-teristics of MOSFETs in the subthresh-old region [6]. 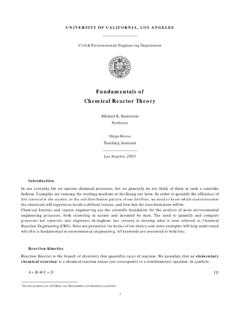 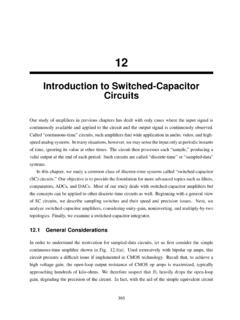 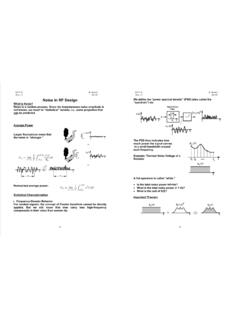 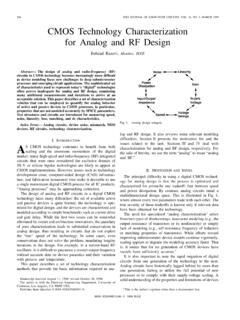 CMOS technology characterization for analog and … 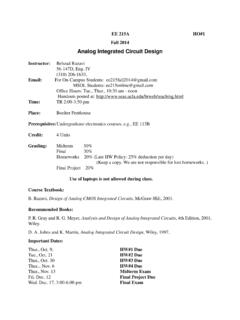 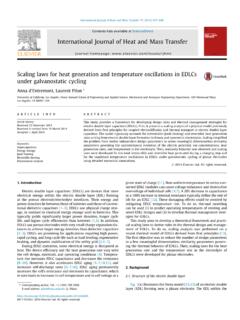 S;T refers to heat of mixing due to temperature gradient 638 A. d’Entremont, L. Pilon/International Journal of Heat and Mass Transfer 75 (2014) 637–649 depends on the ion concentration distribution and vice versa. 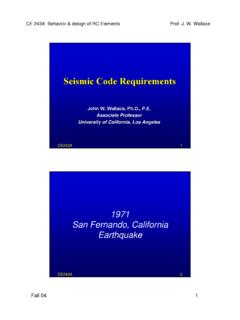 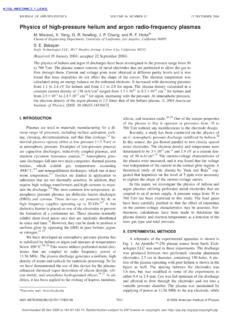 The physics of helium and argon rf discharges have been investigated in the pressure range from 50 to 760 Torr. The plasma source consists of metal electrodes that are perforated to allow the gas to 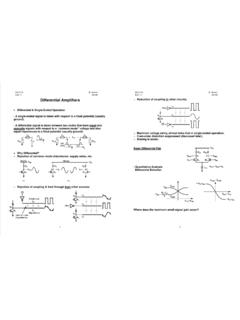 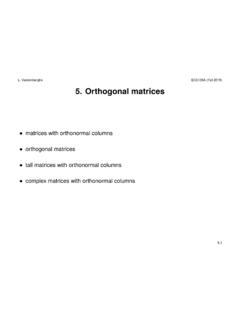 and 100% testing guarantee a low input offset voltage (3 mV maximum, J grade). Input offset voltage is specified in the warmed-up condition. 3. Together with precision dc performance, the AD712 offers excellent dynamic response. It settles to ±0.01% in 1 μs and has a minimum slew rate of 16 V/μs. Thus, this device is

dc offset automatically. This method was developed using the Tektronix 2012B oscilloscope. Waveforms: • Sinusoidal • Common frequency Method: • Display the two traces in voltage v. time mode, along with the product trace in voltage2 v. time mode. Use ac coupling. • Fit the traces in the screen vertically.

However, the voltage drop across the sensing resistor may become low enough to be comparable to the input offset voltage of subsequent analog conditioning circuit, which would compromise the measurement accuracy. In addition, the current sensing resistor’s inherent inductance must be low, if the measured current has a large high-frequency ...