Page 1 Practical Mosfet Testing for AudioPractical Mosfet Testing for Audioby Nelson Pass, (c) 2003 Pass LaboratoriesIntroductionThe quality of individual parts is a particular concern to Audio do-it-yourselfers (henceforth known as DIYers). Many of them lay awake at night agonizing over choices of capacitors, resistors, wires, and so on, in the belief that the characteristics of these passive parts greatly influences the quality of sound passing through the circuit. Maybe what about the active components? If there is anything that the objectivist and subjectivist camps should be able to agree on is that there is considerable difference between different active gain devices and that they produce measurable, if not audible a minimalist, I personally like to work with mosfets , and I do so because they give me the most performance with the fewest parts.

Practical Mosfet Testing for Audio page 2 out the Drain. This connection has no current gain - the output current equals the input current. It can produce

1 Page 1 Practical Mosfet Testing for AudioPractical Mosfet Testing for Audioby Nelson Pass, (c) 2003 Pass LaboratoriesIntroductionThe quality of individual parts is a particular concern to Audio do-it-yourselfers (henceforth known as DIYers). Many of them lay awake at night agonizing over choices of capacitors, resistors, wires, and so on, in the belief that the characteristics of these passive parts greatly influences the quality of sound passing through the circuit. Maybe what about the active components? If there is anything that the objectivist and subjectivist camps should be able to agree on is that there is considerable difference between different active gain devices and that they produce measurable, if not audible a minimalist, I personally like to work with mosfets , and I do so because they give me the most performance with the fewest parts.

2 It is my experience that particularly with simple circuits and minimal feedback, the specific character of the individual Mosfet makes a real that in mind, we set out to measure some of these parts and see if we can select the best for use in the signal is a Mosfet ? FIRST off, a Mosfet is an electronic amplifying device, more specifically, a transistor. It is a little part that has three connecting pins coming out of it, known descriptively as the Source, the Drain, and the Gate. Using a hydraulic metaphor, if you think of the Mosfet as a faucet, then the Source and Drain are what the water flow through, and the Gate is the lever that turns the flow on or off, fast or slow.

3 Except, of course, that the water is electrons, and the lever is operated by electronic the water analogy, assuming that there is some water pressure (voltage) across the faucet (transistor), then water (electronic current) will flow through it when the valve in turned on (the Gate is charged with voltage). In the case of a Mosfet , if there is Drain pin voltage relative to the Source pin voltage, electric current will flow from the Source to the Drain if there is enough voltage placed between the Gate and the Source. There are two basic kinds of mosfets , the N channel and the P channel types, differing by the voltage polarities they work with.

4 In the case of an N channel Mosfet , we can make a fine operating example (that you can do yourself) by attaching the Source pin to circuit Ground, a positive voltage source to the Drain through a current meter, and a variable positive voltage source to the Gate, In this case a potentiometer from V+ to ground with the wiper at the Gate. (Figure 1)When the potentiometer is at full counterclockwise, the Gate voltage is at 0 volts (grounded as we would say) and no current flows through the transistor. As we turn the potentiometer clockwise, the voltage on the Gate becomes positive with respect to the Source pin and current starts to flow from the V+ of the power supply to ground through the transistor.

5 The higher the Gate voltage, the more current. The less Gate voltage, the less current. The point of conduction varies from device to device, page 2 Practical Mosfet Testing for Audioout the Drain. This connection has no current gain - the output current equals the input current. It can produce output voltage gain in phase with the input. The input impedance is the inverse of the transconductance of the Mosfet , and the output impedance is the value of the Drain course the transistor itself has no idea how you are using it. It blindly reacts to the variations in voltage and current on its pins without any true knowledge of its place in the scheme of things.

6 We all experience something like this now and you reverse bias on the Drain and Source, the ordinary Mosfet will behave like a Silicon diode, that is to say if you take an N channel device and put positive voltage on the Source and negative on the Drain, current will flow, and you ll see something like .7 volts Drain to Source. P channel devices, of course, do the same thing with opposite voltage Characteristics Are There? mosfets come with numerous numbers describing their characteristics:Operating Wattage (Chip temperature) - How hot can you run it?but current will start flowing anywhere from about 2 to 5 volts on the lesson 1: If you turn the potentiometer sufficiently clockwise, you may hear a popping sound and smoke will come out of the Mosfet .

7 If you re lucky. For this reason, I recommend that you keep an eye on the current meter when you try P channel device works the same way, but with the Drain at V- instead. The existence of both N and P polarity devices in transistors is very handy, and gives them a big flexibility advantage over tubes, which have only the N Three WaysAs with the other three pin gain devices, there are only three ways to hook up and use a transistor. With a Mosfet they are known as Common Source, Common Drain, and Common 2 shows three examples. In the Common Source example the signal goes into the Gate, the Source is grounded, and the signal comes out the Drain with its polarity reversed and both its current and voltage amplified.

8 The input impedance is high, and the output impedance is essentially the value of the Drain in Figure 2 that I have gone to the trouble to indicate phase of the output signal with a little sine wave icon next to the output. Of the three ways, only Common Source reverses the Drain, also known as a Source follower, is where the input signal goes in the Gate and the Source pin follows it, providing current gain, but not voltage gain. The output voltage is almost the same as the input voltage. The input impedance is high, and the output impedance is fairly low, being the inverse of the transconductance figure of the Gate, usually seen as a cascode connection, is where the signal goes into the Source pin and comes page 3 Practical Mosfet Testing for AudioMaximum Voltage (pin-to-pin) - What voltages between pins will break the chip?

9 Maximum Current (Drain-to-Source) - What high current will melt the connections?Current vs. Gate-Source Voltage (Vgs) - What is the specific gain character?Gate Capacitance - The input Gate resistance is nearly infinite, but the Gate capacitance is substantial and often are tons more numbers, enough to fill four to ten pages with lists and charts and graphs for each type of device. International Rectifier seems to be the dominant supplier of power mosfets , and such information can be seen at their web site So what characteristics are important? Let s look at the data sheets of one of my favorites, the IRFP240, an N channel power transistor in a plastic off, it s rated at 200 Volts Drain-Source (that s good) and a maximum current of 20 amps (also good), and a maximum wattage dissipation of 150 watts (case temperature at 25 deg C.)

10 The maximum voltage between the Gate and Source is 20 Volts. These are important specs for selecting such a device, but you can pretty much figure that we aren t ordinarily going to be Testing them, as we are not usually looking to break the we go down the long list of numbers, some of interest for linear Audio stand out: Vgs, the threshold Gate voltage where conduction starts (anywhere from 2 to 5 Volts), the Transconductance (somewhere between 0 and 12, depending), and the Gate capacitance (anywhere from 1200 to 2400 pF, also depending). These figures vary with voltages, current, temperature, and also by device. (I would reproduce these figures and curves here, but we don t have that much space, and I d just as soon not have to deal with IR for permission). 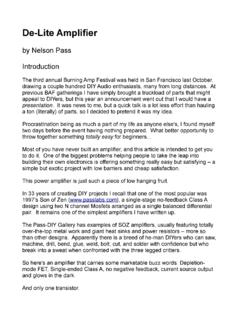 Sony VFETs in Push-Pull Class A Part 2: Common Drain Mode by Nelson Pass This article is the second of a series presenting “Do-It-Yourself” audio power 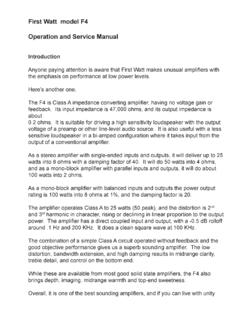 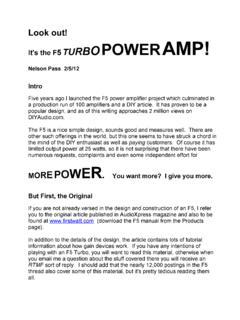 Look out! It's the F5 TURBO POWER AMP! Nelson Pass 2/5/12 Intro Five years ago I launched the F5 power amplifier project which culminated in a production run of 100 amplifiers and a DIY article. 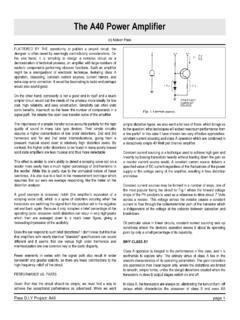 The A40 Power Amplifier - FIRST WATT

The A40 Power Amplifier (c) Nelson Pass Pass D.I.Y Project: A40 page 1 FLATTERED BY THE opportunity to publish a project circuit, the designer is often beset by seemingly contradictory considerations.

Power, Amplifier, The a40 power amplifier 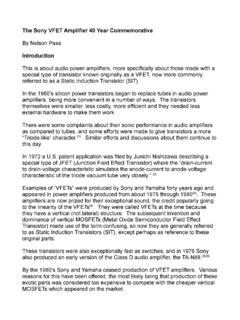 The Sony VFET Amplifier 40 Year Commemorative By Nelson Pass Introduction This is about audio power amplifiers, more specifically about those made with a 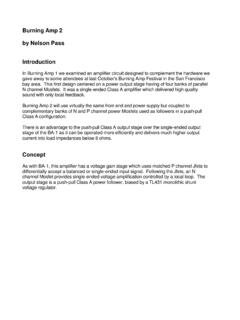 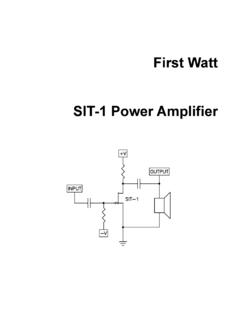 Read Me First I fully realize that many, if not all, owners will rush to hook up the amplifier without reading this operating manual. I …

AMP CAMP AMP #1 by Nelson Pass Introduction Do-It-Yourself audio is a great activity. Many major audio components are easily constructed and made to perform as well or better than what we see in the stores and at considerable 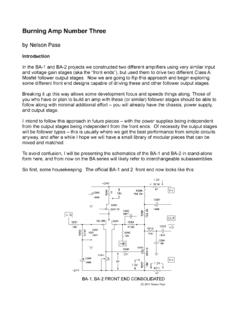 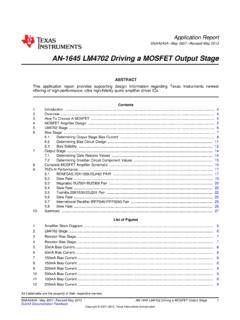 www.ti.com MOSFET Amplifier Design The MOSEFET devices listed in Table 1 are devices from three suppliers that will meet the design criteria based on the LM4702 limitations for direct drive and the target output power specification into a resistive 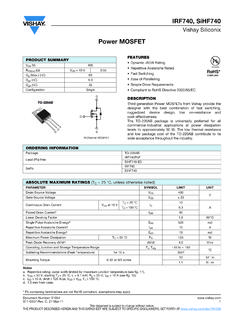 www.vishay.com Document Number: 91054 2 S11-0507-Rev. C, 21-Mar-11 This datasheet is subject to change without notice. THE PRODUCT DESCRIBED HERE IN AND THIS DATASHEET ARE SUBJECT TO SPECIFIC DISCLAIMERS, SET FORTH AT www.vishay.com/doc?91000 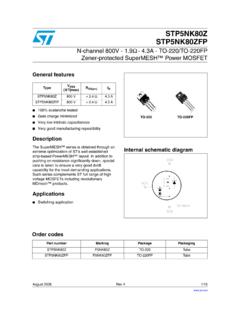 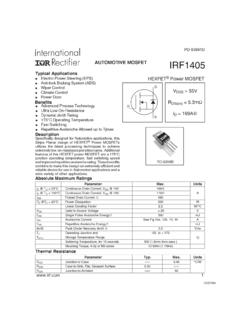