3 YIG lters Filters are the basic building blocks within fre- come the closest to having very good lter selec- quency converting systems such as receivers and tivity, but at the expense of being bulky, requiring tuners. At microwave frequencies (1 GHz and signi cant quiescent current, and being expensive. above), lters are composed of high-Q resonators To date, diode varactor-tuned circuits, though such as printed transmission line, suspended rods, simple and requiring little bias current and size, or dielectric pucks. Depending on the media have not met the expectations of most modern used to create these resonators, excellent perfor- receiver requirements in terms of loss.

4 As such, mance can be achieved with Qs in the hundreds inexpensive and high performance Tunable res- for printed lines to tens of thousands for dielec- onators have become one of the holy grails of tric resonators. The need for frequency tunability receiver components. within broadband receiving and transmitting sys- The advent of microelectromechanical sys- tems usually necessitates switching of multiple tems ( mems ) for radio-frequency (RF) appli- xed-tuned circuits. The use of Tunable lters and cations provides new possibilities for achieving resonators can signi cantly simplify complexity the desired characteristics of a Tunable resonator. and reduce losses within complex multiband sys- RF mems devices, a new paradigm in the con- tems.

6 The application Signal Path of RF mems has already proven to provide Lower revolutionary (rather than evolutionary) improve- Electrode ments in electronic switching performance for Dielectric phase shifters at microwave and millimeter-wave frequencies. This paper explores the use of RF mems Post Cross Section capacitive switches in the application of tun- Dielectric Electrode able lters. Since these devices are operated in a bistable manner, with either a high or low capaci- Buffer Layer tance, they are a natural device for accomplishing digital frequency selection within a lter. The High resistivity silicon capacitive membrane switch is used to create a Figure 2. Views of the RF mems capacitive switch.

7 Multibit variable capacitor which serves as a dig- [Color gure can be viewed in the online issue, which is ital varactor. This varactor is in turn used within available at ]. resonators and coupling circuits to create Tunable , lumped-element LC lters for receiver front-end applications. The basic RF mems capacitive switch is shown in Figure 2. The structure is basically a parallel-plate capacitor with a movable top plate. II. mems VARIABLE CAPACITOR Applying a voltage between the membrane (top CONSTRUCTION/ ELECTRICAL plate) and electrode (bottom plate) creates an PERFORMANCE electric eld. When the eld is strong enough, the membrane will ex downward and contact the To create variable capacitors, xed MIM capaci- dielectric.

9 Gen- ( r = 6 8). Average capacitance, resistance, and erally, the value of the xed cap is kept below Q at 1 GHz for four MIM test structures are the on-capacitance of the mems switch to mini- shown in Table I. It should be noted that when mize the effect of mems variation. Combinations measuring high-Q devices it can be dif cult to of these two-state capacitors with xed capacitors extract accurate values for Q. The Q values are allow construction of variable capacitor structures, ref. [1]. RSE RSE. Fixed RF CON/OFF. Cap mems . RSH RSH. Figure 3. Simple schematic of the RF mems capac- Figure 1. Schematic of a two-state variable capacitor itive switch. [Color gure can be viewed in the online using RF mems .]

10 Issue, which is available at ]. 278 Brank et al. C4. C3. Control Lines C2. C1. C0. Figure 5. Schematic of a four-bit variable capacitor using RF mems . Figure 4. Layout of a MIM capacitor. very sensitive to small errors in R and can be dif cult to extract. Other measurements of simi- lar capacitors yielded Qs that varied by as much as 100%. This large variation depends upon the speci c measurement conditions, such as the calibration method used or the condition of the RF probes. The schematic of a four-bit variable capaci- tor is shown in Figure 5. It consists of ve xed capacitors, four of which are in series with an RF. mems capacitive switch. A layout of a four-bit Figure 6. 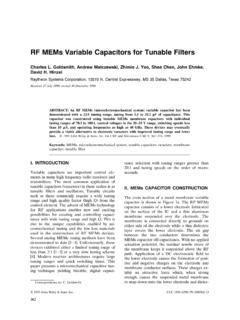 RF MEMs Variable Capacitors for Filters 363 Figure 1. Cross-section of an RF MEMs capacitor in the unactuated a and actuated b positions. . . tric surface, forming a low impedance RF path to 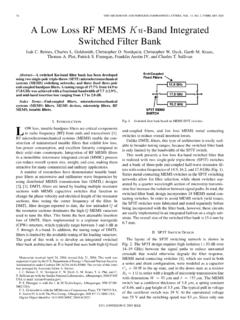 556 IEEE TRANSACTIONS ON DEVICE AND …

556 IEEE TRANSACTIONS ON DEVICE AND MATERIALS RELIABILITY, VOL. 6, NO. 4, DECEMBER 2006 Acceleration of Dielectric Charging in RF …

RF MEMs Variable Capacitors for Filters 363 Figure 1. Cross-section of an RF MEMs capacitor in the unactuated a and actuated b positions. . . tric surface, forming a low impedance RF path to 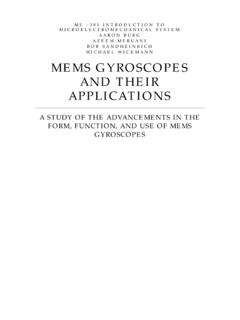 MEMS GYROSCOPES AND THEIR APPLICATIONS

Applications, Their, Mems, Gyroscope, Mems gyroscopes and their applications 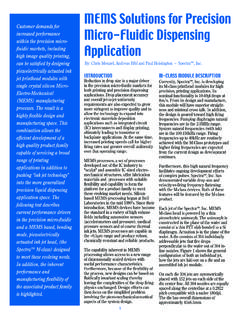 MEMS Microphone Direct PDM Input via I2S to a … 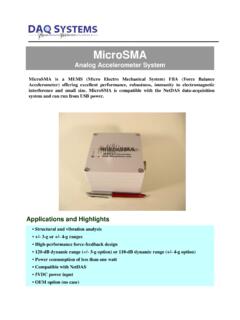 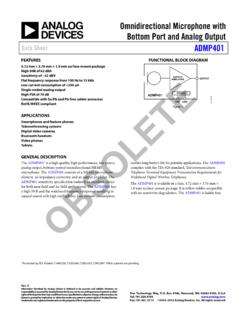